Could animal life develop on the TRAPPIST-1 planets?

Recent news reported the discovery of three "earth-like" planets in the TRAPPIST-1 system. This is interesting because the star is a small, cool red dwarf about the size of Jupiter. The three planets in the habitable zone are tidally locked and about the size of Earth, could have atmospheres, and receive 2 to 4 times the radiation that Earth receives from Sol. (More from the TRAPPIST-1 site.)

Assuming, for the sake of this question, that both atmosphere and water are present, how advanced are native life forms likely to get? Is the development of animal life plausible? If so, what type? The combination of high radiation and dim light (especially if only the twilight band is viable because of the tidal lock) does not sound especially conducive to animal life to me, but I am not an expert.

earth-like fauna stars
Share
Improve this question
asked May 4 '16 at 2:59

As I'm sure you know, four more exoplanets were recently discovered around TRAPPIST-1 (Gillon et al. (2017)), bringing the total to seven — all, amazingly, presumably rocky and near the star's habitable zone. There has been recent work, of course, about the system's habitable zone and whether any of the exoplanets around it could host life, and so I figure I might as well write up an answer taking into account some of the new information we have.

For habitable zone models, I'm going to look to Bolmont et al. (2017). First, look at Figure 1b, which models the habitable zone assuming a mass of TRAPPIST-1 of about $0.08M_{\odot}$. I've drawn a green line at ∼500 million years, which is roughly the age of the system: 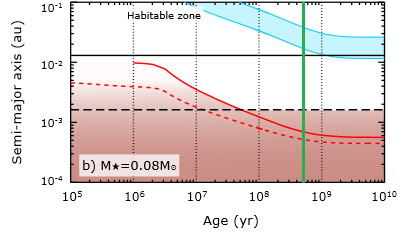 The same authors present graphs of hydrogen (the important component for recombination of water) loss and time spent in the habitable zone for stellar masses of $0.01$-$0.01M_{\odot}$, exoplanet masses of $0.1$, $1.0$, and $5.0M_{\oplus}$, and various luminosities: 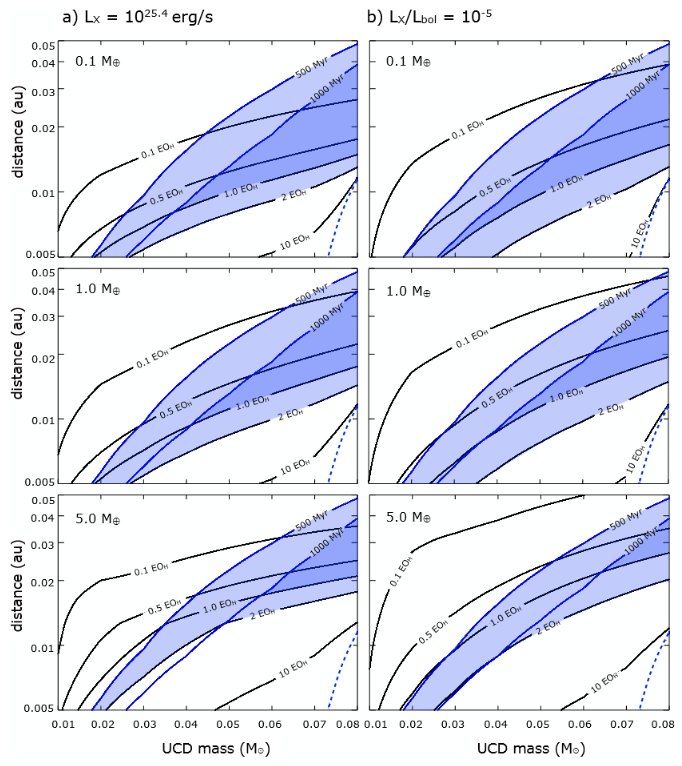 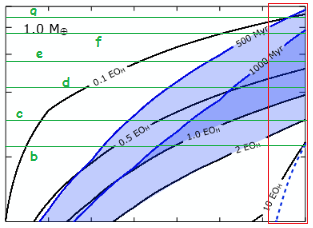 From this, it seems that TRAPPIST-1d and TRAPPIST-1e should be in the habitable zone for a while, at least $10^9$ years and probably several times that. TRAPPIST-1f may get $\sim5\times10^8$ years to $10^9$ years, although TRAPPIST-1g will likely spend minimal time there, if any significant time at all.

TRAPPIST-1b and TRAPPIST-1c should be in the habitable zone for a pretty long time, as we saw in Figure 1. However, they will likely lose a lot of hydrogen: perhaps two to four times the mass of the hydrogen in Earth's oceans, in a worst-case scenario (Lower-mass planets may lose less hydrogen, according to the authors' graphs, which is odd. I'll have to look into that.) Having a large amount of water to start with could make this less of a problem, as the authors argue — and they do say that their models probably overestimate hydrogen loss — but it's still a large problem.

Let's also assume that the exoplanets each have atmospheres with some non-insignificant amount of ozone (O'Malley-James & Kaltenegger (2017) believe that this could lead to UV radiation effects no worse than those on Earth). If we also assume Earth-like atmospheres — not much of a stretch, given the mass ranges of these planets — then we actually have decent targets for life.

What was life on Earth doing when the planet was about ∼500 million years old? Well, it was actually just getting started. The first, smallest not-quite-cells-but-still-reproducing life forms had just gotten started, although they hadn't really achieved much. So if TRAPPIST-1e takes a similar path to Earth, life could be here — or almost here.

Fast forward to one billion years. We've got single-celled prokaryotes (i.e. no proper nuclei) which are developing photosynthesis. Eukaryotes are still a ways off, but progress is being made. A bit over a billion years after that, the Great Oxygenation Event happens on Earth, and oxygen levels in Earth's atmosphere skyrocket. Life is probably already on land, and eventually, atmospheric oxygen will help make respiration possible. Animals — even multicellular life, really — is still a ways off.

You're not going to get animal life for several billion years on TRAPPIST-1e, assuming an Earth-like evolutionary trajectory, but I think that if life gets started there, you'll see some animals. It might take longer on TRAPPIST-1b and TRAPPIT-1c, if there's little water, which is widely regarded as leading to the start of life in the oceans (although obviously, life could take other paths; I've been assuming Earth-like life). TRAPPIST-1d might go similarly to TRAPPIST-1e, although lower gravity may change what types of animal life arise, if they ever do (see How does gravity affect evolution of life?); something similar may happen with TRAPPIST-1f. TRAPPIST-1g and TRAPPIST-1h will likely see no significant evolution of animal life; they just won't spend enough time in the habitable zone.

So, to answer your questions

how advanced are native life forms likely to get? Is the development of animal life plausible?

They may become pretty advanced, assuming you pick the right planet (d, e or f, with my top choice being e). Intelligent life is possible, though not guaranteed.

It's been brought to my attention that recent simulations (Wolf (2017)) also suggest that TRAPPIST-1e is the best choice for life. I haven't read the paper yet, but I'm glad to hear that maybe I was right.

Considering that Hydrothermal Vents are teeming with animal life, in absolute darkness, in conditions that are outright hostile to most surface life (most notably the complete lack of air), there is presently no information about TRAPPIST-1 that precludes advanced animal life.

Quoting from Wikipedia listing some examples of life at Hydrothermal Vents, boldface mine:

Hydrothermal vent communities are able to sustain such vast amounts of life because vent organisms depend on chemosynthetic bacteria for food. The water from the hydrothermal vent is rich in dissolved minerals and supports a large population of chemoautotrophic bacteria. These bacteria use sulfur compounds, particularly hydrogen sulfide, a chemical highly toxic to most known organisms, to produce organic material through the process of chemosynthesis.

The ecosystem so formed is reliant upon the continued existence of the hydrothermal vent field as the primary source of energy, which differs from most surface life on Earth, which is based on solar energy. However, although it is often said that these communities exist independently of the sun, some of the organisms are actually dependent upon oxygen produced by photosynthetic organisms, while others are anaerobic.

The chemosynthetic bacteria grow into a thick mat which attracts other organisms, such as amphipods and copepods, which graze upon the bacteria directly. Larger organisms, such as snails, shrimp, crabs, tube worms, fish (especially eelpout, cutthroat eel, ophidiiforms and Symphurus thermophilus), and octopuses (notably Vulcanoctopus hydrothermalis), form a food chain of predator and prey relationships above the primary consumers. The main families of organisms found around seafloor vents are annelids, pogonophorans, gastropods, and crustaceans, with large bivalves, vestimentiferan worms, and "eyeless" shrimp making up the bulk of nonmicrobial organisms.

Siboglinid tube worms, which may grow to over 2 m (6.6 ft) tall in the largest species, often form an important part of the community around a hydrothermal vent. They have no mouth or digestive tract, and like parasitic worms, absorb nutrients produced by the bacteria in their tissues. About 285 billion bacteria are found per ounce of tubeworm tissue. Tubeworms have red plumes which contain hemoglobin. Hemoglobin combines with hydrogen sulfide and transfers it to the bacteria living inside the worm. In return, the bacteria nourish the worm with carbon compounds. Two of the species that inhabit a hydrothermal vent are Tevnia jerichonana, and Riftia pachyptila. One discovered community, dubbed "Eel City", consists predominantly of the eel Dysommina rugosa. Though eels are not uncommon, invertebrates typically dominate hydrothermal vents. Eel City is located near Nafanua volcanic cone, American Samoa.[15]

Not the answer you're looking for? Browse other questions tagged earth-like fauna stars or ask your own question.

4
Could life exist on a tidally locked planet?
19
How does gravity affect evolution of life?
8
NASA discovery: 1 star, 7 planets, multiple in habitable zone. How would this affect life on the planets?
4
Evolution of animals' eyesight on habitable planets orbiting TRAPPIST-1?

8
Exoplanetary Review: Rock Storms
3
a habitable planet orbiting a Neutron Star that moves through galaxies
6
Two orbits, Four habitable planets in the goldilocks zone?
4
Tidal forces of tidally locked moon orbiting a gas giant
6
Radiation from binary star systems and how that would affect a planet orbiting both stars
1
In Search of a Super-Bright, Super-Stable Star
7
How soon does the Earth's surface re-solidify after the red-giant Sun is replaced with a different star?
4
How to reduce the greenhouse effect while keeping the same amount of CO2?
5
What forms of life would be best adapted to living on a world with nine year long days?