An armor that deflects any physical forces against it

Suppose you are given an armor that has this curious property: as soon as a force is applied into it, the force vector is changed by 180°. If you throw a rock against it, the corresponding energy would not be absorbed by the armor, but reflected with the same amount of energy it currently has.

1) What would be the effect of someone thrusting you with a sword?

2) What would happen if an arrow is shot at you?

3) How would you be defeated when wearing this armor?

One could argue that the armor would be unusable (how could one move it and wear it in the first place?). If that is the case, assume there is a force threshold that activates the effect.

reality-check physics armors
Share
Improve this question
edited May 3 '16 at 17:46

Never mind that you're breaking physics, your hero is going down if there's enough people who want him out of the picture. You have a major weakness:

"assume there is a force threshold that activates the effect"

Capture him! Immobilize him. Then kill him at your leisure.

Throw a net over this guy and then gently lower him into a pool to drown. Or gently crush him to the point where the can't breathe. Or insert a blade in between the armor's cracks.

There is no shortage of ways to kill him.

Like we learned in Dune, the slow blade penetrates the shield.

Anything moving faster or with more force than the threshold is going to rebound.
Arrows would be shot backward at speed, swords swung with any force would be either thrown from their wielders hand, break the wielders arm, or snap back around to possibly injure the swordsman.

So whats the weakness? The slow blade, moved up to the armor with deliberate care, and pushed through a chink.

Sword fights between two armored fighters would probably be very interesting, with blades moved very quickly into position and then slowed to below the threshold before striking.

Nets would also be very effective, like a Retiarius might use.
Actually, that would be a really effective setup; Throw the net, place the trident through to a joint and press firmly. 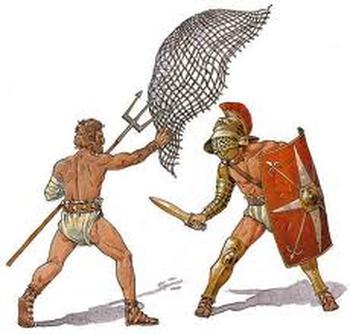 I don't know about the physics of it, buy I can tell you how a person equipped with such armor be defeated:

Pretty much the way people in armor have been defeated throughout history: You hit them where there is no armor.

No armor suit covers you entirely. There must be gaps in the coverage to allow you to move and, well, fight. You need to be able to ride horses etc.

Thus, historically speaking, only amateurs and Hollywood swing swords against armored men. The difference is, in a real battle that guy would've been killed. In Hollywood, you can cut through mail, or even plate armor with a sword. Which of course begs the question why bother wearing armor in the first place.

Thus the way to fight a man in armor, if you don't have an anti-armor weapon like a warhammer or a mace, is by half swording. That is, if you have a sword, and you're fighting a man in full plate, your support hand holds the sword halfway up the blade. This allows you to control your blade and jab it into the gaps of the armor. Another technique was to hold the sword by the blade and use the heavy hilt as an improvised mace.

Remember: Armor is designed to stop cutting and thrusting/stabbing. And to a certain extent, blunt force trauma. Armor worked, which was why people kept wearing them. Hitting the armor where its designed to take that hit is futile.

Short answer: life would suck super hard for whoever wears the armor. Because physics.

Long answer: Newton's Third Law means your knight is going to feel every bit of every hit he takes.

Newton's third law states that for every action, there is an equal but opposite reaction. If the force is being reflected accurately and without losing magnitude that means that on the other side of the armor something has to be providing the resistive force. And sooner or later your soldier will feel that resistive force. Now it may not be enough to kill him, because maybe you can distribute the impact somehow, but it is going to take its toll. Think about bullet proof vests for a second: the way they work is by distributing the force of the bullet throughout the vest. But you will still probably break some bones or just end up with some insane bruising.

By reflecting a blow you double the force felt by the wearer by any blow, so basically the answers to 1 and 2 are that your soldier probably feels a bunch of pain and/or falls over. He gets defeated being hit with weapons that won't hurt the wielder if reflected and that the wielder can move with to prevent to much damage to the weapon.

What you describe is the properties of a large rock. Actually an infinitely large infinitely hard rock, but if your shield has any imperfections due to implementations, it probably would act like a large rock.

Any hard surface which does not move will cause the effects you are seeing. Rock is hard, and a heavy rock wont move very much. Accordingly, a sword striking this armor would have exactly the same effect of trying to fight a boulder with a sword. An arrow would be like an arrow fired at a boulder.

How do you defeat it? The answer to this is a question: "how do you defeat any armor based on some non-realistic physics?" It's trivial to create an armor which has no weaknesses in the presence of only physically realizable weapons. If you want to make an invulnerable armor, you can.

I can see a few issues. Unless you violate thermodynamics by having heat that can only travel one way, your armor is going to be the hottest wool blanket you've ever felt. Heat is high speed particle movement, so if it reflects collisions perfectly, its going to reflect all heat -- in both directions. The wearer will feel like someone wearing full Alaskan winter survival gear on a desert island.

Also, breathing is nice. Its not nice to reflect all of the oxygen molecules away from the wearer. This is actually a big deal for the force shields of Frank Herbert's Dune, which you may which to use as a source. He had shields which only turned on when something fast came at them. Below a threshold, the shield did little to nothing, letting oxygen and carbon dioxide diffuse across the border.

As a result, in Dune, there was an entire set of skills regarding how to fight with a shield. You learned how to move so slowly and smoothly that the shield didn't realize it was being penetrated.

First of all, I'm going to answer your questions one at a time.

Not the answer you're looking for? Browse other questions tagged reality-check physics armors or ask your own question.

8
How would medieval combat differ if its arms and armour were refashioned today?
9
Weapon Design: Nitinol Fire Sword?
4
Deflective Shielding: Possible?
25
Indestructible silk: good armor?
9
Figuring out the math for the Sphere of Meteoric Conversion
2
Drawbacks of my Catastrophe Inhibitor
1
Could a steel cylinder punch through plate armor?
8
Space-based black hole weapon effects
6
Lightsaber + Pogostick: How would deceleration work on an extendable “arm” of pure handwavium-energy?