There's a classic story that uses a chemestry text as a Rosetta Stone to get a toehold on an exo-archeological expedition, because the properties of the elements prove to be something known to be in common with the aliens.

The elements are the same. But how might aliens organize and represent them?

Different (perhaps better) ways of laying out the table are already well documented.

But this XKCD cartoon (link for explain xkcd commentary) got me thinking... 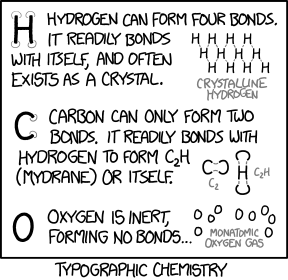 Meanwhile, I have thought about alien alphabets and digits in the past. Considering a simple letterform (as opposed to a complex ideograph) it's actually very hard to invent something that's not already in Unicode for some writing system, as there are only so many ways to combine a small number of elementary strokes.

So, my question is: how might an alien race depict the compact symbols for elements that are somehow evocative of their nature? Suppose that the elegant symbols are applied to the lightest elements (and those known/important in antiquity) and the full table can be formed by adding modifications to the basic symbol to move to heavier rows.

The element's nature would be the bonding structure (count or shape), but I didn't want to limit it to that in case someone has other inspiration; the fact that carbon has so many hybrid bond types might be more important than any specific bond represented.

They could be like our symbols for astrology objects, used only for those things and not related to general writing. But it would be coolest if they were normal characters, exploiting the geometric nature of their (alphabetic or syllabic) writing system. (An ideographic writing system using pictograms of the Lewis bonding structure is just too lame. So emphasis on relatively simple character shapes: think ☿ not 辰星.)

Reopen: Jim2B says he has an objective answer; see his comments. So, it doesn't have to be "opinion based". Give it a try; you can always close it again if it's no good, but he's a high-ranked poster and I expect something good and interesting.

There's different ways that you can organize the elements, as you said:

I feel strongly that these options for an alien would differ based on culture and level of technology.

Don't forget the possibility that an established periodic table can change if it conveys additional information that would be useful as a sort of casual reference for the new technological advancements that a species reaches.

For example, each element has a unique spectroscopy signature, and this is vital to understanding what elements are significant and present in distant celestial bodies.

This is important if you're a space farer. So you could find that the following table could be encoded in various ways, and the elements that support life or are vital to their technology or existence would be up in the front with their better symbols. 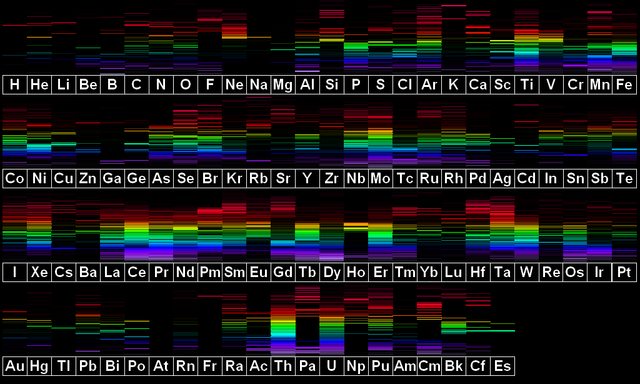 So onto the symbol aspect, what we're looking for is a simplification and compression of information that would encode a higher level classification. Schwern already talked about how that would be easy for a proton/neutron count. But this becomes more difficult with additional pieces of information. How do you take an entire spectroscopy signature and compress it?

You have a few choices:

This being said, don't forget that an advanced space faring species might be invested in symbols that are universal. This is what we took into consideration when depicting the hydrogen atom on the Voyager Golden Record/Pioneer Plaque, which is a hyperfine transition of hydrogen.

Basically, it's possible that the information encoded in literal universal symbols (circles, wavelengths, etc) is sufficient and would take precedence over an arbitrary and cultural alphabet or pictogram, which only they would understand.

Knowing nothing about these aliens, let's just look at more meaningful ways to describe the elements if we remove the historical and cultural naming conventions. There's no reason aliens would have this very human obsession with giving things names associated with mythology or who discovered it or where it was discovered or what property happened to be important when it was discovered... anything but its fundamental properties.

For example, "hydrogen" is from the Greek ὑδρο- "hydro" meaning "water" and -γενής "genes" meaning "creator". It's named that because when you burn it, combining it with the then unknown oxygen in the air, you get water. "Carbon" comes from the Greek verb "γράφειν" which means "to write": you write with graphite (ie. a pencil). Not very descriptive, in the long run, of two of the most important elements for life.

Simplest thing to do is to name them by their most defining characteristic, their proton count: "Element 1", "Element 2", "Element 3", and so on. Perhaps this would be written in shorthand as E2 for Element 2 (helium).

The neutron count would go where the confusing and historical atomic weight now goes. 0E1 would be hydrogen with one proton and no neutrons. 8E6 would be Carbon 14 (6 protons, 8 neutrons = atomic weight 14).

And that's the two most important things you need to differentiate the elements and their isotopes: their proton and neutron counts. Everything else is a property of that isotope.

You can flip this on its head and do exactly what humans did, but with alternative means of discovery and properties they found significant.

Maybe the alien who discovered carbon was impressed with diamonds, so its name means "shiny thing which cannot be damaged". Maybe mercury, instead of lauding its speed (ie. quicksilver) and associating it with the Roman god of speed, associated it with insanity and named it after something symbolic of insanity.

You'll have to fill in the blanks, they're your aliens.

You could go with a binary of sorts... consider the use of Math in Contact and how the researchers determined that the signal was intelligently created in origin. In this story, the signal pulsed in incremental prime numbers (Whole Numbers that are only divisible by 1 and themselves 1, 2, 3, 5, 7, 11... ect). These numbers are too random to be produced in nature, but so basic it can be understood under any counting system (if you use base 7, then 11 is still 4/2 and 10/2 is still not a whole number).

Elements are ordered by the number of protons in their nucleus and the number of electrons in their orbital cloud... All non-metal elements have between 1-8 electrons in their outermost cloud. The ones on the far right of the periodic table have 8 (the noble gasses, with the exception of Helium, which has 2) and the far left have 1. The place on the rows descends as the number of inner electron shells increases. Thus, you could easily establish a pattern of two numbers (P,E) which will denote the behavior of most of the important to life elements up to the 18th (Agrgon). P would be the total number of protons, where as E would be 1-8 for the last shell of electrons. Thus (8, 6) will be oxygen. (16, 6) would be sulfur. Pattern recognition and basic high school chemistry can carry your language this far. Beyond Argon, you'll need a better chemist than me, because I don't understand the metal groupings (groups 3-12) and the heavier elements between row 3 and 4 on columns 5 and 6.

Converting this to a binary will be another layer of help as any math will need to show a one or a zero representation. The fact that Binary tends to be a grouping of eight ones and zeroes might also help since the most electrons in a single shell is eight, though I don't know how to group that.

4
How would two alien races decipher each others language?
21
How alien can a language be - grammar?
7
How alien can a language be - transmission?
1
"Alien" superintelligence learning human languages
24
Scientific Naming Conventions for Alien Creatures
2
Possibility of two-way sign language communication between humans and non-humanoid, dexterous alien
11
Alternative elements for oxygen transport in an alien blood
8
Could an alien evolve to speak through its anus?
2
Adult-sized alien child and child-sized alien adult