Our Universe, but with a parallel component that is somehow connected to every location [closed]

I am looking to have a visual diagram that shows the structure of our physical Universe (I mean the physically recognized 3 dimensions) but with an additional sort of dimension(?) tacked on it.

This "dimension" would have the following characteristics: 1. electromagnetic radiation in our Universe would have some component(s) that are also visible in this additional "dimension" 2. the dimension could connect any two locations in our physical Universe so that those two locations are temporarily the same (allowing things space travel without space flight, teleportation, and access to closed containers)

(In this case there would be some villains who have somehow gained the knowledge of how to open these portals using electromagnetism.)

How could this kind of "Universe+" structure be drawn diagrammatically?

Itll have to look like that of which your mind becomes a dimension of. Your thoughts, imagination your belief in the purpose of what you are attempting becomes that reality reguardless of where you maybe, The mind can still see when eyes dont see cant see are not looking to see was not in position to see but in the mind you will always see a scene a site a visual a picture an image and more and with just that you could be anywhere you are seeing yourself at and position yourself to be. A trust in travel. Dimension. And in universe itll be like living in your supreme dreams..

If I'm reading this question correctly, plotting this universe structure onto a map is a simple matter of plotting points onto 3D space normally, and then adding a 4th dimensional point to each of those points for the portals.

Points are normally plotted (x,y,z), where x, y and z are the 3D planes of existence.

In your universe, you simply have each point labeled (x, y, z, d), where d represents the point in the other dimension. How does this help plot the portal locations though? Well, since the portal locations are stated to be "temporarily the same", the point (x1, y1, z1, d1) would be a different point in the physical universe than the point (x2, y2, z2, d1), but the same point in the alternate dimension - the d1 point. So someone standing at (15, 1, 3, 1) could theoretically open up a portal to a point (3233, 23231, 545, 1), assuming you wanted those 2 points in the universe to have a connection. 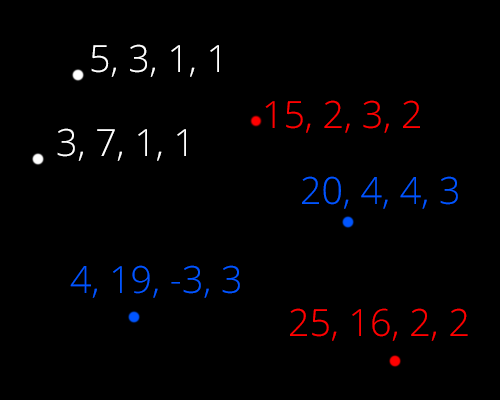 Imagine that this picture is one of your maps, perhaps a map of a quadrant of space. In the center of this map is the "origin" of your map, so perhaps a star or something. Note that the x y z coordinates are relative to the origin of the map, (numbers not to scale in this picture) but the 4th number (the "d" number) comes in pairs. This can be used to signify how the different points connect to eachother. So in this map, a person standing on either of the white points can "move" through the portal to get to the other point", and red to red, blue to blue, etc.

In my picture, I used color to differentiate the points because it makes it a bit easier to understand, but of course, you could use only color to differentiate between portals; but then you'd quickly run out of colors that you can discern from the visible eye. This method allows you to link an infinite number of points in the universe together simply by using the same "d" number on the points.

Not the answer you're looking for? Browse other questions tagged science-based physics universe spacetime-dimensions .

19
Gravitational effects of portals at different heights
42
Can I keep our universe, but without the speed limit (of light)?
0
Constants/properties of a very small-scale and compact universe that is still recognisably like our own (and is it possible)
6
Could a force with these properties exist in a parallel universe?
4
Could a universe with a reverse of the relativity of our universe be self consistent?
1
Could a universe with a relativity that is a cross between Galilean and Lorentzian Relativity be self consistent?
7
Schwarzschild Metric in a universe with the same space time metric as that described in the orthogonal series, but with massive gravitons?
4
Could a universe with different wavefunctions for elementary particles from those of our universe be self-consistent?
1
What unexplained or difficult to explain phenomena in our universe could be used to power magic in a parallel universe?
7
When is the earliest that the Universe could support planets with long-lasting biospheres?