What are the known algorithms to create a planet with a subterranean cave network?

I know a few algorithms to build an elevation map for a planet, but most of them do not take into account the underground aspects of the planet (caves, tunnels, ...).

Are there any algorithms to take care of this? Are they used only after an initial elevation map has been created or could they be used jointly to create a cave/tunnel network more efficiently?

Any pointers to algorithm descriptions, surveys or working libraries are welcome!

This sort of thing can very easily be "fudged", there is no need to simulate the world and erosion as you care more about things looking good.

There is a simple example here: http://hub.jmonkeyengine.org/forum/topic/how-to-approach-random-cubic-cave-generation/

There is a long and very informative GPU Gems article here talking about procedural terrain generation:

The details are too long to pull out into this answer but the root idea is that it combines different noise functions to dynamically and procedurally generate terrain like this: 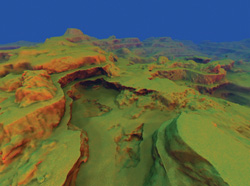 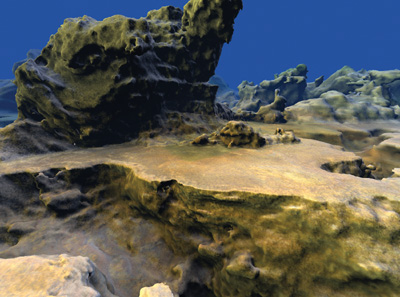 By setting the rules correctly, water would come from above at random intervals and areas and erode the earth, weakening each cell until it disappeared, or it could cause rock deposition in empty spaces (stalactites and stalagmites). If you had a 3D simulation, you could also add gravity, requiring that water always move horizontally or downhill unless the rate of flow was restricted at some point (at which point it could rise upstream of the blockage), or unless it got sufficiently hot.

Gravity could also be used to determine collapses - if insufficiently strong earth is asked to span too great a distance without support, it would collapse.

Magma would come from beneath, originating from a hot spot, whose intensity and position of maximum heat may vary over time, and magma might solidify to form hard rock, or subside again to leave cavities (depending on the type of the hot spot and/or random factors), and it would also heat water, making it rise.

This wouldn't necessarily be quick to program, and wouldn't be particularly quick to run, but done properly, could produce very realistic results.

Not the answer you're looking for? Browse other questions tagged map-making caves underground .

4
Why might humans abandon the surface of their planet in favor of a subterranean existence?
19
What is the oldest a cave could possibly be?
3
Average Speed when Caving
3
What is the evolutionary advantage of albinism in cave-dwelling animals?
4
What would be the evolutionary drives of a lush cave environment?
39
Could an underground civilisation deduce the size and shape of their planet?