A spaceship in the far future.

Output: The ships systems have a high base demand of energy and sometimes you need extreme amounts of Energy in a very short period of time.

Input: An advanced fusion reactor is used to provide baseline-power. There are a range of 'injections' into the system, some of them sudden, extreme energy peaks, some minor and rising/falling softly.

What would be the best way to store energy and provide the necessary flexibility?

Presenting the latest product from Nikola Industries, the WhoNeedsOil Power Cell. Compatible with all mark 9 fusion reactors*, this compact, low mass energy storage solution uses a superconducting wire chilled to a supercool 0.1K to store energy in a magnetic field, for those extra little boosts of power.

Fear not if you need something more long term, the WhoNeedsOil can store energy practically indefinitely*. At up to 95% efficiency, this technology leads the market* so contact Nikola Industries today for a quote, or alternatively drop by our factory showroom, 48°51′29.6″N 2°17′40.2″E Alpha_Centauri_Bc.

Supercapacitors is my answer to you. A supercapacitor is essentially a big battery that discharges (or at least can discharge) a lot of energy in a short amount of time. They are used for short-term energy storage or delivering massive bursts of energy.

An example of burst-mode is KERS on racecars. You can use supercapacitors to store energy when braking and keep said energy for the next straight-away if you need a speed boost.

If anti-matter is available use that, else a superconducting capacitor

The absolute energy storage that can be had within the laws of physics as we know it is in the form of anti-matter. This relies on the complete conversion of matter to energy and with the giant constant c in

this makes for a very efficient energy storage mechanism. However, using antimatter leads to some tricky creation and containment issues which may have been solved. One prime challenge is how do you absolutely ensure that the antimatter never touches regular matter till you want it to? Failing to solve this challenge leaves you with a rapidly expanding cloud of super heated gas that used to be your ship. You'll have to decide whether your tech is advanced enough to handle those challenges.

This is the more plausible approach since we may be able to do something like this in the next 50 years. Superconductors do weird things with electricity and magnetism at very low temperatures, chief of which is very low resistance to current flow. You'll need those ultra low resistance values when you're discharging the capacitor at max discharge rates.

You'll need the following advanced tech to make these super-capacitors:

Make sure that your dialectric doesn't become a super conductor at low temperatures. That would be bad.

They can store energy with rotational energy, in a Flywheel Energy Storage device. 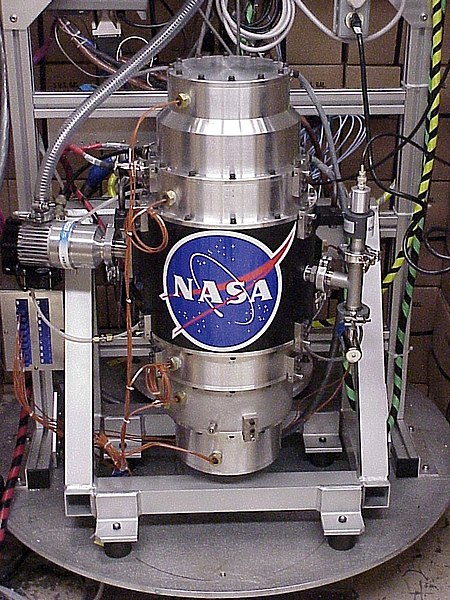 These store energy by using a motor to spin up a flywheel in a vacuum sealed box, with the flywheel suspended by magnetic bearings. To charge it up, power is sent into the motor, spinning up the flywheel. When it is time to power your expensive ship systems (FTL drive, giant railgun, etc) you connect the motor as a alternator or dynamo and sap power from angular momentum.

The plus side of these is that they are current day technology. No hand-wave required for your basic model! They also interact well with hand-waving miracle materials that have higher tensile strength, which would allow more energy to be stored.

For extra fun, use superconducting bearings to reduce friction further and increase efficiency!

Don't store it; shunt it. While you're at it, go big or go home.

Storing energy is dangerous: ever seen Star Trek? It'd be better if it was shunted when not called for. Oversize your reactor to be able to supply enough power to complete any conceivable task. Then give it a quadruple safety margin. The question then becomes, how do you shunt 1.21 gigawatts when, "blow it out the top," (Quora) isn't feasible?

All good warships are capable of producing their required power on-demand. So much so, that they can supply emergency power to small cites if they want: "U.S.S. Lexington provides electricity to Tacoma" –historylink.org

The chosen answer is indeed, realistically, the best one. Superconducting solenoid batteries allow for the densest theoretical possible energy storage for electrical power, limited only by the chemical binding force of atoms to prevent it from flying apart from Lorentz forces. With something like aggregate diamond nanorods, you can reach energy densities of 20 MJ/kg easily. And while it doesn't look that impressive compared to, say, gasoline (one of the most energy-dense fuels out there, actually), remember that gasoline + oxygen is not as impressive, that you can extract as fast as you want, you don't need a bulky engine to extract said energy and that said bulky engine would be at best something 50% efficient anyway.

High-temperature high-power superconductors aren't that big of a handwave, nor even room-temperature, in fact, for fare future tech, if you don't want to bother with cryogenic equipment.

Also, it will turn all its stored energy into heat (aka violently explode) if damaged, heated too much or overloaded, which is always good for SF tech. Also also you can actually call it supersolenoid, which makes for nice technobabble.

But that's not enough! (After all, it never is.) We are talking about far-future tech! We don't want to be limited by weak atom bonds!

If you are OK with a bigger handwave and wants moar power! in storage, you can go for nuclear isomers. A nuclear isomer is an otherwise stable atom nucleus that is in an excited state. At some point it will decay, but unlike things like beta decay, it will only emit a gamma ray - and the process is (theoretically) reversible. And an excited nuclear isomer contains a lot of energy. Like more than a million MJ/kg. Simply put your far-future gammavoltaic cells to turn those gamma rays into electricity and you're fine.

The problem is, isomers come in two categories: the "barely existing" ones, that will revert in a nanosecond, and the "nearly stable" with an impractically long half-life. Stabilizing the former is probably impossible - but wouldn't it be nice if we could induce the latter to revert and emit that sweet, sweet high-energy photon?

Some guys pretended they had managed it with Hafnium isomers by spraying them with X-rays. Alas, this has been discredited since. Hafnium batteries have since gone the way of the Dean drive, the water engine and the EMDrive. Sigh.

But wait, not all hope is lost! Unlike those, the Hafnium battery wasn't dismissed out of hand by anyone with a modicum of knowledge in physics, because it could have worked! Which means that there may be other methods, beyond current technology, that actually work. Maybe with some exotic particle that require a brand new type of particle accelerator.

The point is, while today Hafnium batteries are bunk, they are still believable as far-future tech.

There is also the question or producing those Hafnium isomers, but if you can induce de-excitation, you should know how to induce excitation as well.

Hafnium isomers have 31 years of half-life, which is fine for short-term energy storage. If you need much longer-term, you can use Tantalum isomers instead. With 40 000 MJ/kg instead of a million, they are not nearly as dense (though still much better than supersolenoid batteries), but their half-life is much, much longer than the age of the Universe.

Those tables may be useful for comparison of storage densities, which is on of the main criteria here.

Compressed air energy storage (CAES) is a way to store energy generated at one time for use at another time using compressed air. At utility scale, energy generated during periods of low energy demand (off-peak) can be released to meet higher demand (peak load) periods.[1] This is especially important in an age where intermittent renewable energy sources such as wind and solar power is becoming more prominent energy sources. CAES systems can have a vital impact in making sure the electricity demands can be met at peak hours.

You could compress hydrogen instead of air, of course. Even in space hydrogen wants to be a gas. Hydrogen might be handy for other reasons too.

8
What measures (and appropriate countermeasures) would be used for sensing and target acquisition in far-future space warfare?
40
With current technology, what would be the best way to store energy for future generations?
5
Is there a reliable way to store all stable elements?
11
What does a small fusion reaction sound like?
14
What are the risks with massive banks of batteries/capacitors?
8
How long does a derelict spaceship last in orbit?
8
How small can a perpetual energy source be to run a far-future civilization indefinitely?
2
What is the most efficient way of mining energy from a flare star?
6
Performance envelope characteristics for a hard-sci-fi torch-ship
7
What is the most plausible way to lower cost to orbit?