Where in the galaxy would one find the most heavier elements?

I'm trying to flesh out the history of a fictional galactic society, specifically the initial settlements and inhabited worlds. Something that I thought would be important to settlers would be an abundance of heavier elements (because hydrogen is pretty easy to come by, but uranium not so much, and it's not the easiest thing to synthesize).

The way I understand it, heavier elements are created by stars, whether from everyday fusion or supernovae. What I'm wondering, though, is given all the space in the galaxy and the goal of finding a solar system with the largest ratio of protons/neutrons/electrons per atom, are there ways to identify the best solar systems to check out first, short of actually travelling there and taking samples?

Research suggests that heavier elements can be found in greater quantities closer to the center of a spiral or elliptical galaxy. Henry & Worthy (1999) summarized several measurements of ratios of heavy elements to hydrogen. For example, here's a collection of graphs of oxygen-to-hydrogen ($\text{O/H}$) ratios from emission line objects (e.g. ionized gas, such as HII regions) in the Milky Way: 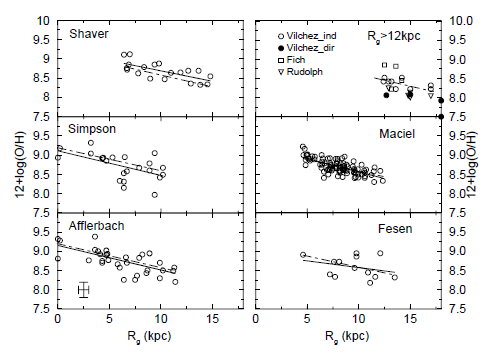 Oxygen is used mostly because of its high concentration relative to other heavy elements in HII regions; iron-to-hydrogen ($\text{Fe}/\text{H}$) is more commonly used for stars. Another important point to note is that the observations show that there is a positive correlation between galactic mass and metallicity (see Fig. 4b) - the more massive a galaxy is, the greater its likely metallicity.

Things get trickier when looking at the stellar component of a galaxy. There isn't a substantial metallicity gradient in the galactic halo, although globular clusters do show a range of metallicities. The galactic bulge has yielded poor data so far, in the case of the Milky Way, and while the thick disk population seems to show no radial gradient, the thin disk population shows a small decreasing gradient, as determined by $\text{Fe/H}$ ratios for individual stars.

One important thing to note about stellar metallicity is that there are two distinct populations of stars: Population I, the newer, more metallic stars, and Population II, the older, less metallic stars (here, I use "metallic" as it is used in the astronomical context, to refer to elements heavier than helium). There is also a hypothetical third population, Population III, that consisted of stars that formed early in the history of the universe before dying, but evidence in this area is not yet forthcoming.

I should note that the above refers primarily to the density of elements in the interstellar medium and giant molecular clouds, which only indirectly lead to planet formation through the formation of protostars and their associated protoplanetary disks/nebulae. However, I would wager that this would still affect the composition of planets orbiting stars in a region with greater metallicity, given that molecular clouds eventually collapse to form stars and massive stars, in turn, enrich future clouds with heavy elements.

Additionally, spiral arms are likely to contain more metals than other regions in a spiral galaxy because of the above feedback loop. This is believed to be largely because supernovae disperse heavier elements, but in the spiral arms, those elements are more likely to be absorbed by the denser gas of the region, enriching the molecular clouds and subsequently ensuring that stars that form in the region have higher metallicities. 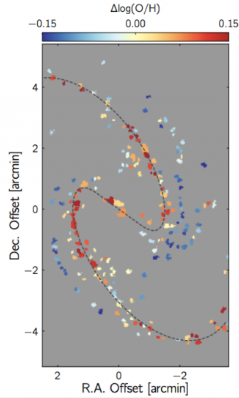 This is consistent with Henry & Worthy's trend of decreasing metallicity with increasing radius but adds additional structure to the gradient.

Actually I'm pretty sure everything heavier than Iron is produced when a star goes supernova.

Hydrogen (1), Helium(2), Oxygen(8), Carbon(6), Neon(10), and Iron(26) are the 6 most common elements in the universe. These are all created with fusion in stars and not all stars burst into a supernova either.

So where to look? Where very large stars have already gone supernova as larger stars will have started with more material to fuse into heavier elements to begin with and then leave behind much larger quantities of heavier elements spread around. The more the merrier. So going in toward the center of a galaxy would significantly increase your chances of finding more elements beyond Iron.

I believe this same process happens when before a star collapses into a black hole. And stars have to be fairly large to finish up as a black hole, this means that prime real estate would be in the vicinity of black holes.

The study of Extrasolar planets. (Otherwise known as 'Exoplanets'), can already tell us a few things abut a planet lightyears away, just by observing it from earth. We can find a planet's size, distance from its star, even, in your case, what elements it contains. The most advanced way to observe these planets (That I know of) is by using a spectrometer.

Spectrometers Nebulas, rocks, planets, stars and other such objects in space give off signals that can be intercepted by an instrument called a spectrometer, which separates the signals into different components. Basically, the spectrometers act like prisms, separating light into its colors. This is useful, because elements actually have a few certain colors that they give off. By spreading out the light given off by say, a planet, and we find that we can see only certain colors, by matching the colors to their elements, we can see what elements the planet has. All from the surface of a planet, observing another, lightyears away.

Not the answer you're looking for? Browse other questions tagged science-based astronomy space-colonization natural-resources galactic or ask your own question.

69
Where should a galactic capital be?

9
Where can a Victorian-level civilization find significant amounts of helium?
19
Technology without heavier elements
3
Transmutation from thin air. Literally(ish)
22
Aliens englobed the Solar System: will we notice?
6
How feasible is this gravity-altering exotic matter I’ve conceived? Would it have any unforseen consequences?
3
What would the sky view be like of a final stage massive merged galaxy?