Garm the Berserker wanders into the lonely homestead of Greenroot Farm. The mayor of the nearby Stonybrook Village directed Garm here, implying that Old Borgi would have some work for him. "Really, no wood to chop?" Garm rests his axe on the ground, the blade nearly half as tall as the old farmer. "Not today, but if you can bring me 20 redfruit, I'll pay you with 10 coppers." Garm slung his greataxe over his shoulder, "I accept this task. I will return victorious!" An wizened smile crossed the old farmer's face as the adventurer departed. "There's always someone willing to do the dirty work," he chuckled to himself.

So imagine a classic RPG world where the above scenario is typical. Farming communities have a small population, with a great number of adventurers passing through on a daily basis. Often the farmers have a few assistants/children to help them, but the majority of the work is done by the adventurers seeking quick coin and the mysterious "XP". In this world, an adventurer can expect to find some amount of work to do in each village. That is, there is no uncertainty of employment when travelling to a new place. I want to make this as realistic as possible. Rather than the residents just happening to need certain favors whenever someone passes through, I want them to expect to have hapless adventurers to order around on a daily basis and base their income on this labor. Questions:

There are major costs in this system some are listed below but first, we must ask:

Why is everyone moving around?????

There are really large, powerful monsters that slowly move around and change the size of their hunting zones.

People continually flee hunting zones and move into newly vacated ones as monsters move on or are defeated. Many adventures are refugees moving and looking for a place to settle or hunting the next monster. NPCs are former travelers or adventures who have found somewhere to settle or earned their land by killing the monster that plagued it.

Costs of most workers being migrants.

Coordination is a problem.

Some adventures are low level like Tim 'the Puny' a 1st level bard. Tim and those like him are happy to pick cabbages for a few coppers/xp. But Throg 'the Load', a 23rd level barbarian with the strength of 100 men, wants 10,000 gp because that is how much he could make killing dragons with his bare hands, which he loves doing.

So we need to have situations that require massive skill and have massive rewards along with low difficulty ones with low reward. This makes coordination harder because the adventurer has to know both that there will be jobs in the next town and that they will be suited for him. Even if there are openings in the area for a dragon wrestler, Tim won't be able to work.

Some jobs require specific skills. If you want someone to craft a magic staff, neither Tim nor Throg can help. You need a wizard or enchanter like Hera 'the Enchanting'.

Training is a problem.

Migrant workers are most useful in fields (pardon the pun), where little training is needed. The farmer spends 5 minutes teaching Tim how to pick a cabbage and then Tim works for 5 days and leaves. Where this doesn't work is fields that require training. Even though Throg is strong enough to be a blacksmith, it will take 3 years to train him, and by then Throg has moved on. Even if Throg tries to find and train with a blacksmith in every town it will still take much longer for Throg to train than if he had stayed put. This would create a strong incentive for a traditional apprenticeship- stay in one place to learn the basics, then move abroad once you have the skill.

Equipment is a problem.

Midas 'the Golden' is a 48th level alchemist with the ability to transform lead into gold, but he needs a complex and large laboratory to do it. If he has to travel around then he either needs dozens of wagons or he can't make gold anymore.

Yes. As an analog, look at the US agricultural system. While not "almost entirely", it makes heavy use of migrant labor, people moving from region to region following various harvests and plantings which need a lot of labor for a brief time. 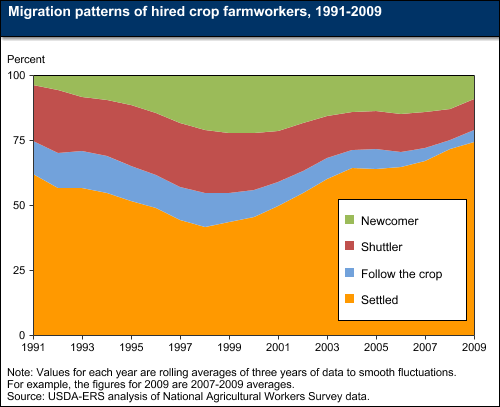 This is an average for US agriculture as a whole, and only for hired workers (vs the owners and full-time employees). Certain very labor intensive crops will require more hired workers than the average. And a fantasy setting won't have the mechanization that the modern world does and thus will need more labor.

Good enough to show it's feasible.

It's great for the landowners! They get a lot of cheap labor, right when they need it at harvest or planting time, and then once the work is done they can be paid off and disposed of. They don't have to care for those laborers for the rest of the season.

The local (stationary) agricultural workers will be harmed. The influx of a supply of migrant labor will drive wages down. Not only during harvest and planting, but it will have a knock-on effect. The landowners will say "why hire you at $X/hour when I can get four adventurers for that?" So long as there are always a few adventurers hanging around town, short on coin, the threat of hiring them is enough to drive wages down. It doesn't matter whether there's actually enough labor to make good on the threat.

Cheap labor also devalues skilled labor and mechanization. Why train and hire and expensive skilled worker when you can get four unskilled adventurers? They each do half the work, but you can hire four times as many for the same money! Why invest in machinery to do the work when you can hire cheap adventurers?

This would also be used to break up any unions... I guess in a fantasy setting guilds. Don't want to deal with the guild rules or prices? Hire a bunch of adventurers. If guild workers can't get work, and if the guild doesn't have leverage over the employers to make them use guild workers, guild workers will defect and start working for lower pay and worse conditions.

Then there's the issue of having all these migrant workers with little connection to the local community. Once the work is done and they're paid off they're suddenly flush with cash and out of work. This is both a boon for the locals, since they can sell them things, and a bane, since a bunch of bored, young adventurers from out of town might get drunk and rowdy.

Cheap labor drives down production cost. How much so depends on how labor intensive the particular food is.

In an environment with many farms competing with each other, this would drive down the price of food. In a non-competitive environment with a few farms colluding they'd keep prices high and pocket the extra money as profit. The latter is very likely in a medieval setting with no government oversight and no global food transportation. Nobody is going to break up a monopoly and there's no cheap fruit from Argentina to compete.

Not the answer you're looking for? Browse other questions tagged economy agriculture or ask your own question.

10
How could a society be based off of the rules/conventions of an RPG?

11
Is the world of a Roguelike RPG plausible?
5
Would a decentralized food system be a better option for the world?
2
Would the absence of an axial tilt preclude the use of seasonal crops in agriculture?
39
Farming the Abyssal Plain?
6
What would be the most efficient way to farm humans?
3
Could sweet and hot peppers come from the same plant?