Is a space elevator with wings feasible? (engineering, not economic concerns)

Consider a very conveniently placed asteroid in orbit around the earth, and we hang the space elevator off of that. It doesn't have to be at the geostationary altitude but it would probably help if it was (I think).

The elevator is made of 2 ribbons, with (at an optimal altitude) a sequence of wings between them, it looks like a ladder of wings. The elevator is going at a fairly high speed relative to the earth and in a region with little wind, maybe somewhere near the equator.

As far as I can tell the main issues are still with the strength of the ribbon, it will need to be strong enough to handle the drag force and the weight, but hopefully the weight issue will have been significantly reduced by adding wings. It would be dangerous to have this thing even come close to the ground, so you would have to dock with it from an aircraft. You would want the docking part significantly lower than the wings because the downwash would be monstrous.

Oh and of course it would need some way to prevent bird strikes, I feel like they might notice a giant structure flying through the air but those idiots hit 747s we can't trust them.

a) Once one gets the asteroid in place is this idea impossible to manufacture? Or just unreasonably expensive?

b) have I missed anything important in my considerations?

Sadly, the answer is

Thought experiment:
You are in a plane holding a rope through the window, it is trailing behind you. Now you do the same thing, but with some model-airplane-wings attached to the rope. Will your rope get lighter?

I may have misunderstood your description, but it sounds like you have a non synchronous orbital elevator which orbits the Earth rather than being anchored in one spot.

Such elevators are indeed possible (there are actually two basic types, an elevator which "hangs" in the atmosphere as it orbits and a Morovec "Rotovator", which turns about its own axis and can be though of as "rolling" around the world, periodically dropping an end into the atmosphere to pick up or deliver cargo.

The issue is these devices are incredibly massive, especially compared to the cargo they pick up, and are moving at orbital velocity, some 7.8 km/s. In Imperial measurement, this is 17,450 mph, or roughly Mach 22.

Your problem at this speed would be frictional heating and drag (especially drag slowing down and causing a momentum tether the mass of a supertanker to de orbit). Having a set of wings either individually or in series will probably have a "null" effect, with the extra lift being cancelled out by the increased drag of all the airfoils. Most conceptual designs have the tether orbiting at such an altitude that the end is extremely high in the stratosphere (if not higher), and only a scramjet or rocket reaching the edge of space is capable of reaching the end of the tether and hooking p for a lift into space.

If there is a place for airfoils, perhaps there might be a set of control vanes at the terminal end to give some fine control to facilitate docking, somewhat like the booms used by the USAF to fuel aircraft: 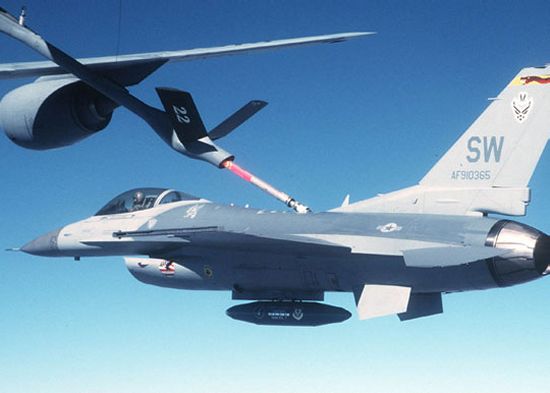 As a final note, while having multiple paths to climb and descend the tether is good in theory, the need to minimize heating and drag argues for only one actual "end". Multiple paths can be accessed higher up, here is a diagram with several designs for possible orbital tethers: 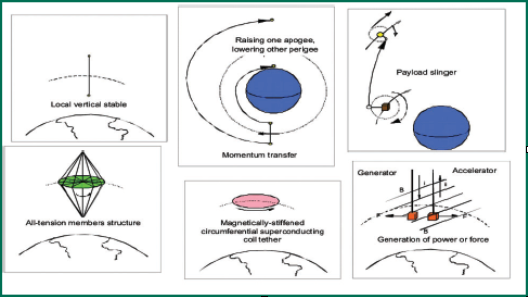