Would ablation be an effective way to redirect objects in space?

So I'm writing a story set in the close(ish) future(say 2130), and space debris is starting to be a real problem. Stations in orbit are constantly having to maneuver out of the paths of orbital debris, at least a few satellites have been taken out, and it's just a big hassle all around.

So (space organization) gets a few meetings together and they decide that a reasonable solution would be to launch a few lightsail craft equipped with high power pulse lasers to maneuver space debris using ablation to deorbit it. The lightsail craft would be maneuvered with the help of a laser array on the surface of the Earth, and they would deorbit debris by ablating the debris in the opposite direction of its flight, hopefully slowing it down enough to make its trajectory intersect the atmosphere.

But is this really an effective solution? What are some ways to make it more effective? Bonus points if you can tell me the math required to calculate how much power the laser would have to draw to ablate steel in 1/60th of a second or shorter.

The answer is actually "yes", and the proposed system is sometimes referred to as a "laser broom".

The general idea is to use laser energy (in most proposals, from mountain top laser batteries) to deposit energy on a piece of space debris. The material on that side will eventually vaporize and propel the object into a different orbit via Newton's Third Law. In effect, you have made part of the object into a rocket engine.

This idea is ramped up to "11" when discussing asteroid deflection. Some proposals substitute a nuclear device for the laser, and unlike the movies, the device is set off away from the asteroid. The intense pulse of X-ray radiation from the device vapourizes a portion of the surface of the asteroid, which once again acts like a rocket motor and moves the object onto a new path.

Now there are a lot of variables to the idea. A rocket impulse requires a lot of energy to be deposited onto the body in a small area and generally in a short time frame. Lower energy might not do the trick unless it becomes enough to create a plume of vapour to drive the "rocket" impulse. A series of short impulses that are powerful enough to vapourize the surface of the body might work better than a long continuous beam. And of course the body needs to be understood, so things like the material it is made of, the orbital path and even the centre of rotation are identified and taken into account. A wildly tumbling body might need to be stabilized by hitting it multiple times with the laser broom until it is spinning in a predictable manner, so the final impulse is controlled and the path the body will take becomes predictable. 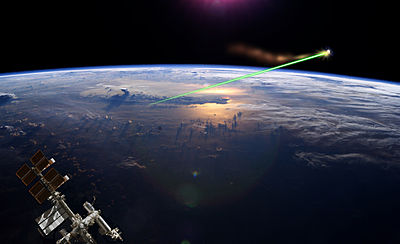 This is personal opinion. Until a working anti-spacetrash system is deployed it's theoretical problem that's still being developed.

The problem here is not that ablation won't redirect debris (it will, and has been considered as an asteroid defense) but that if debris are an issue, they will be of such quantity, small size and spread over such a vast area that a laser system will not be able to make a serious dent.

I suggest you read up on https://en.wikipedia.org/wiki/Space_debris

As of 2014, there were about 2,000 commercial and government satellites orbiting the Earth.[4] It is estimated that there are 300,000 pieces of space junk ranging from 1 cm to 25 cm, and on average one satellite is destroyed each year.[4]

Not the answer you're looking for? Browse other questions tagged science-based internal-consistency space-debris .

9
Satellite salvaging: safely de-orbit and retrieve spacecraft or other objects

14
How would nanobots consume objects?
6
Blocking sunlight using space debris
0
How does a spacecraft attempt an intercept course with a hostile one realistically (Part I)?
28
Could burning debris keep burning in space?
10
Space station debris
9
How to Effectively Collect and Recycle Space Junk?
9
Satellite salvaging: safely de-orbit and retrieve spacecraft or other objects
6
An effective way for interstellar communication?