Which Particles would make a particle beam weapon visible outside an atmosphere?

So I am trying to make a sci fi story and I wanted directed energy weapons for starships besides lasers and plasma. I heard that a neutron particle beam weapon could be visible, but could any one clarify which particles might produce light to the naked eye in the vacuum of space?

And what about free electron lasers, would they be visible?

Free Electron Lasers (FEL) don't actually shoot electrons at things - they use electrons to produce light (coherent light, so it meets the requirements of being a laser). The electrons circulate around inside the device in a carefully designed way. The movement of the electrons is what produces the light. The useful feature of FELs is that they're somewhat tune-able. You can make a FEL spit out visible light if you build it right.

That's all a side topic though; all lasers, in space, regardless of their frequency, can't be seen... unless they're being shot into your eyes**. If your laser is in the visible spectrum, then you can see it reflecting off anything it hits. This is the light you see from a laser in darkened, smoky rooms. In space, there's no smoke, so you don't see a whole lot.

You would, reasonably, expect to see a beam of plasma. Plasma is hot. Very hot. And hot things glow. That is to say, they produce their own light.

Now, to neutrons. To the best of my knowledge, neutrons are not visible. They hold no charge, so they don't create light when accelerated, and neutrons don't contain heat like atoms do. Freely moving neutrons are unstable. They like splitting into proton + electron pairs. Each decay produces a photon up in the gamma-radiation range, so it's no visible either.

At the end of the day, there's a number of reasons why you don't want the beam to be visible. If you can see it at a distance, that means energy is leaving the beam to reach your eyes. That's energy that doesn't make it to the target. We generally call that waste, and inefficiency, and try to minimize it as much as possible.

** Ouch! I do not recommend looking directly at a laser beam.

Beams in an atmosphere are visible

This is what a charged particle beam would look like when it strikes the Earth's atmosphere: 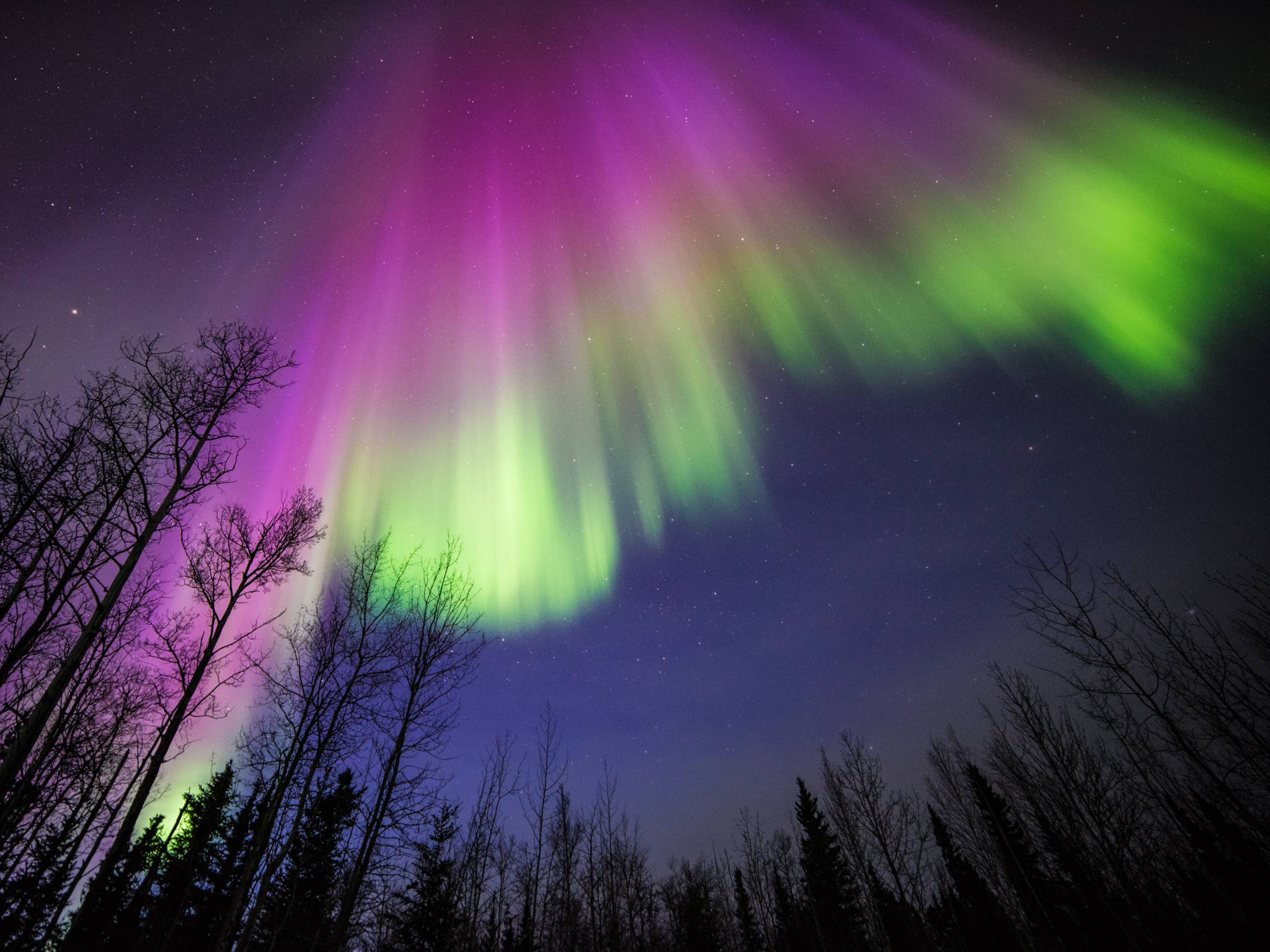 Beams in space are not visible

As user6511 said, an efficient beam would not scatter energy away from the beam (whether it's a laser or a particle beam). Atomic Rockets section on space combat has lots of useful information. 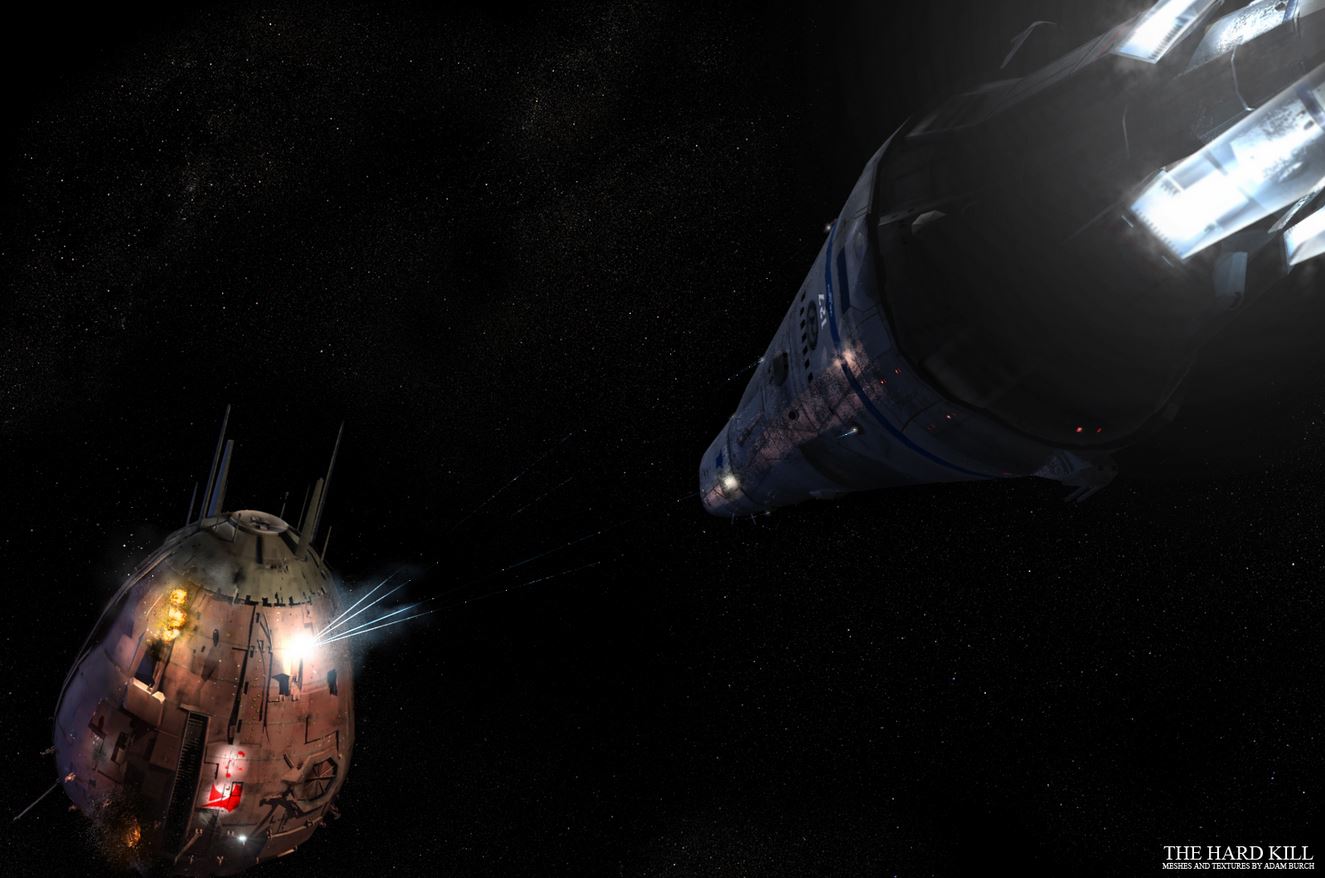 NOTE Laser beam doesn't become visible until it encounters the material ablating from the target.

However, a sophisticated combat computer might project probable beam (projectile and missile) paths onto a display for the spaceship crew to see (as part of its combat information). Since it's poor engineering to put windows into a spaceship, probably all such information is from these displays anyway.

The only sort of beam which would be visible in space would be one which is both very powerful and passing through some sort of medium which is illuminated by the energy of the beam.

Lasers, particle beams and especially antimatter would all become visible if some sort of medium was interposed between the beam emitter and the target. In any realistic setting, the beam would became visible near the target after a few strikes, as parts of the target become vaporized and if internal atmosphere or fluids start being ejected into space due to hull and radiator breaches.

Antimatter might be visible farther out since any anti particle will interact and annihilate any normal matter particle it encounters. Since space in the inner Solar System is filled with a very tenuous plasma, there are opportunities for interactions. The beam won't look like anything you see in the movies, however, since the particles will be widely spaced in the solar wind, so the beam will appear like a series of bright pinpoint sparks along the path of the antimatter beam.

While a dense plasma will be self illuminating as it radiates its energy into space, the self repulsion of plasma unbounded by a container or magnetic field will cause it to "evaporate" blindingly fast as viewed by human eyes. Pasma weapons are impossible using currently known physics.

11
How to create 'visible' space-laser-like weapons

12
Would a circumbinary planet have a differently colored sky depending on which star was visible?
3
Preventing the dispersion of a particle-beam behind the target
12
Which conditions would make aerial filter feeding successful?
9
Ways to detect lasers from afar
5
Ring-Shaped Particle Cannons and Circular Coilguns
6
Space Combat Depiction 1: Laser Pew-Pew
6
Are laser-stars the better missile carriers in space warfare?
10
Relativistic Interstellar Combat