Everybody, even those who are complete beginners in the field of Astronomy, know Io, the cryovolcanic moon of Jupiter that looks like a burned pizza with skin cancer. Volcanoes constantly spit out sulphur in various forms and compounds, which gives Io its characteric coloring that consists mainly of yellow, red and orange fields with occasional black or green patches. The pattern can change completely within 2 weeks! 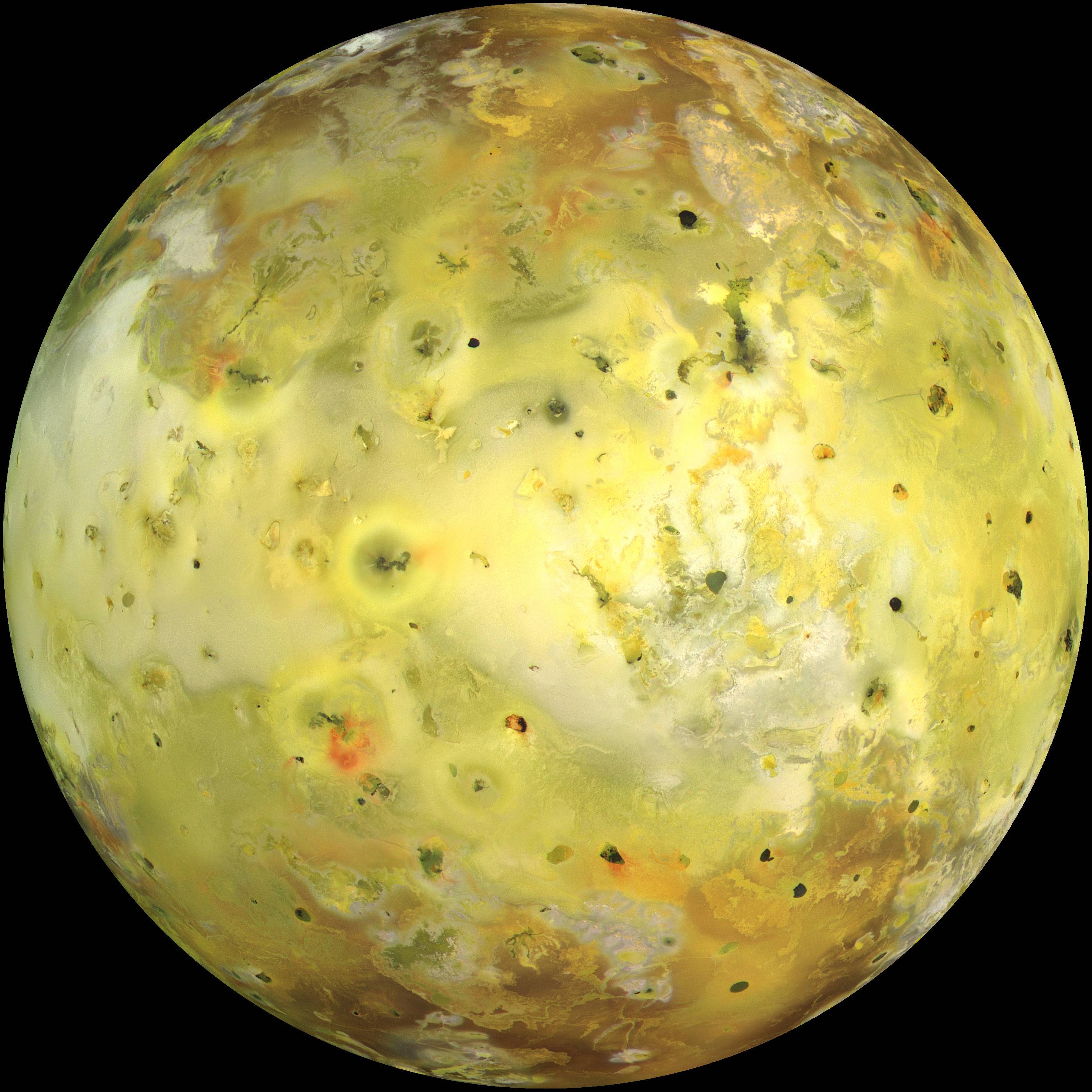 Now, for my SF novel, I want to create a similar celestial body, with one condition: the planet is going to be blue. Light or dark blue with occasional white, black or green patches, with severe cryovolcanism just like Io has. 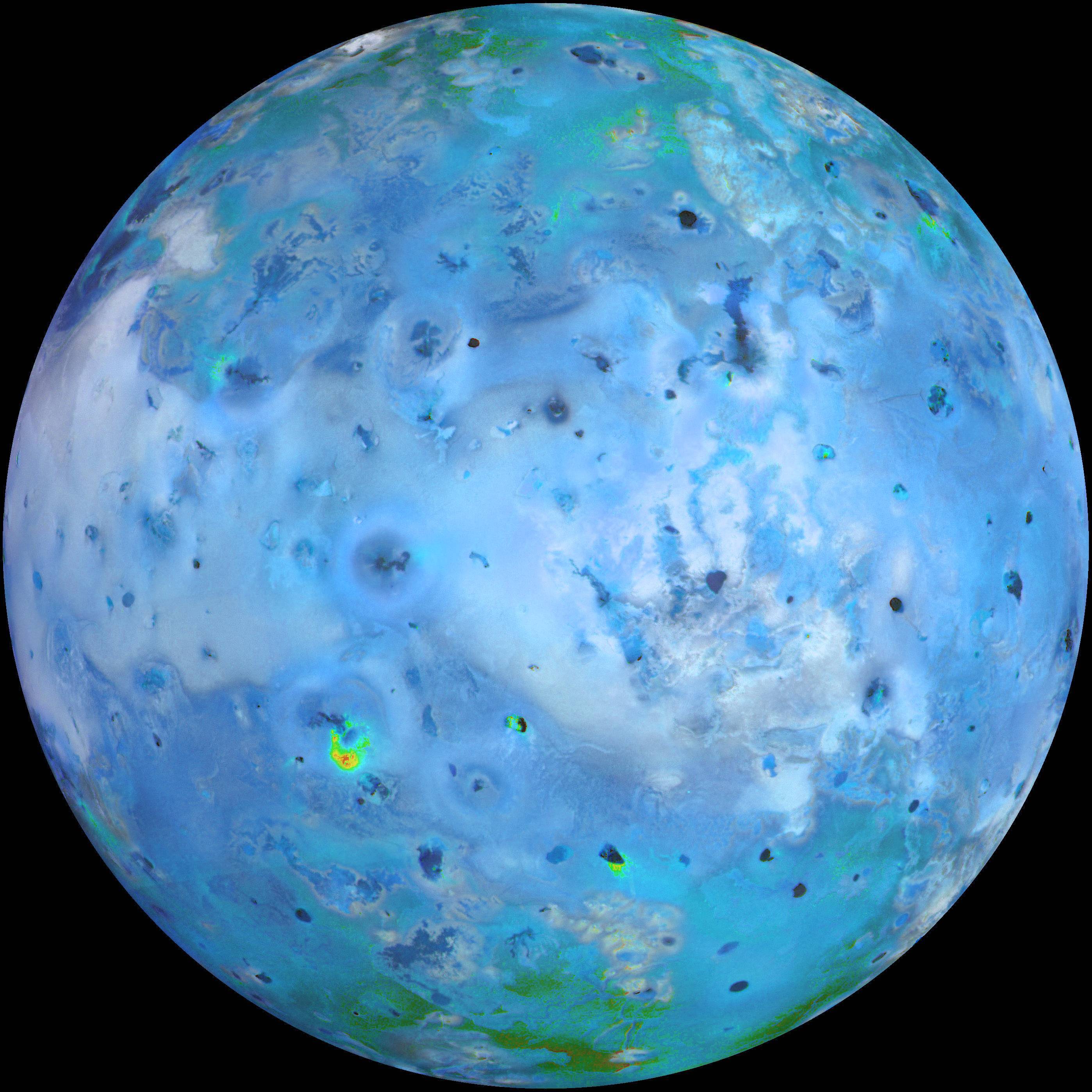 EDIT: The compounds which color the moon blue should be solid at a temperature of -200 degrees.

As anyone who's studied inorganic chemistry knows, many salts of copper in the +2 oxidization state have colors ranging from green to a nearly black dark blue, including some remarkably intense shades of sky blue like those of copper(II) sulfate and copper(II) nitrate: 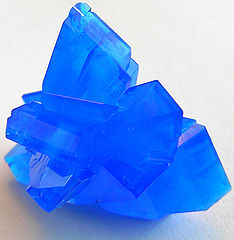 Images from Wikimedia Commons. Left image by user Stephanb at the German Wikipedia, used under the CC-By-SA 3.0 license; right image created and released into the public domain by user Benjah-bmm27 at Wikimedia Commons.

One important detail to note is that the colored forms of most of these salts are hydrated, i.e. they include some water molecules as part of the crystal lattice. Removing this water of crystallization will typically destroy the coordination complex, and hence the color. Thus, in addition to copper, your blue planet also needs to retain at least some water (although it need not be present in liquid form). In a pinch, other small polar ligands like ammonia may also serve the same role (either alone or mixed with water, as in e.g. tetraamminecopper(II) sulfate), although the exact hues will be different.

Ps. Some iron salts in the +2 oxidation state, such as iron(II) sulfate, also have a blue-green color, but iron compounds can take on many other colors as well, depending on the oxidation state and on the other compounds present. Unless you tweak the surrounding chemistry just right, an abundance of iron is far more likely to give your planet the rust-red hue of iron(III) oxide, just like on Mars, than the deep blue shade of iron(II,III) hexacyanoferrate (a.k.a. Prussian blue).

It's not easy being blue. You only have to look around to see how little blue there is in nature.

Oxygen is blue, and freezes at -218*C, but pure oxygen is rather too reactive to consider existing in in substantial amounts. It would react with almost anything it found.

Many of the "ices" would either be white, due to dispersion, or tinted with red, due to the formation of thorins. Methane would look red. On the other hand, most rocks are grey.

If you are willing to imagine rather far-fetched geology then there are a few pigments that could occur: Ultramarine does form naturally as a metamorphic rock. If you could imagine the right conditions existing in your volcanoes you could dye your methane snow with ultramarine. The elements for Prussian blue (iron, carbon, nitrogen) are also available in the universe. However Earth's geology seems not to allow its synthesis naturally.

Oceans look blue, and a nitrogen ocean could cover the planet to give a blue colour to much of the planet, with the continents being some other colour.

Not the answer you're looking for? Browse other questions tagged planets geology chemistry volcanoes or ask your own question.

2
What would the average terraformable planets look like?
10
Giving a Planet Sunburn
24
What effect would liquid sulfur oceans, sulfur dioxide in the atmosphere have on visibility, sound propagation and other environmental information?
6
Geography and Appearance of an nitrogen/ammonia planet
30
Terrestrial Exoplanet Skies – I've Built a Visual Sky Chart. Is it Correct?
2
The effects of gravitational pull in a solar system with a pendulum Sun
4
Looking for a review of my tidally locked red dwarf planet system specs!
6
What does a gas giant close to a red dwarf look like?
7
How soon does the Earth's surface re-solidify after the red-giant Sun is replaced with a different star?
6
The Earth and Moon resolidify under a bluer star, their outer layers evaporated and burned away. What do they look like now?