How fast would a planet have to be spinning for the centrifugal/centripetal force to cancel out the force of gravity near the equator?

So, I know that on the planet earth, the force of gravity is actually slightly less nearer the equator, due to the Centrifugal Centripetal Spinny Force. Not by a whole lot, but by some small amount.

Personally, I find both of these things extremely weird to think about, but that's mainly because more or less every aspect of the natural world is weird if you think about it. But this isn't about that. My real question is this:

Would it be possible for a planet to be spinning so fast that its Spinny Force cancels out the force of its gravity (more or less), without it turning into a disc and tearing itself apart?

Let's just say that we find a planet somewhere that has the exact same size, makeup, and gravity as earth, but without all of the stuff that we have on the surface. (Mainly because it seems like having a lot of water sloshing around on the surface in this scenario would cause problems.)

This would also be for the average human, say, 60kg, if that even matters.

Would this planet be destroyed by the stresses upon it, and if not, would it be even remotely livable on the surface. In this case, I’m defining “livable” as “I could walk around without immediately dying for some reason”, assuming this planet has a earth-like atmosphere and pressure prior to whatever caused it to spin in the first place.

Just think about it. Planet is held together by gravity. If something cancels gravity at certain place on the planet, that place would not stay a part of the planet anymore.

UPDATE: I have reconstructed the answer with some explanation and formula as proof. I have it is more solid now, please comment below if you would like to discuss further

For TL;DR, No, it is impossible to form a planet like that.

In order to have the centrifugal force of the planet rotation cancelling out the gravity force (I think weightlessness is more of the correct term here, but I stick to the former for easier explanation), you have to be in orbit, so the planet would have to rotate very fast for achieving orbital velocity in the equator. Here is the function for calculating the needed orbital velocity.

The equation for calcuating orbital period would be

We now found out the needed rotation speed, however, could the planet be formed in such conditions?

The reason for most planets to be spherical is that the gravitational acceleration is mostly equivalent throughout the planet. This is due to the mass of the planet is uniformly distributed (Mostly).

Using Earth as example, here is the graph of the Earth according to the Preliminary Reference Earth Model 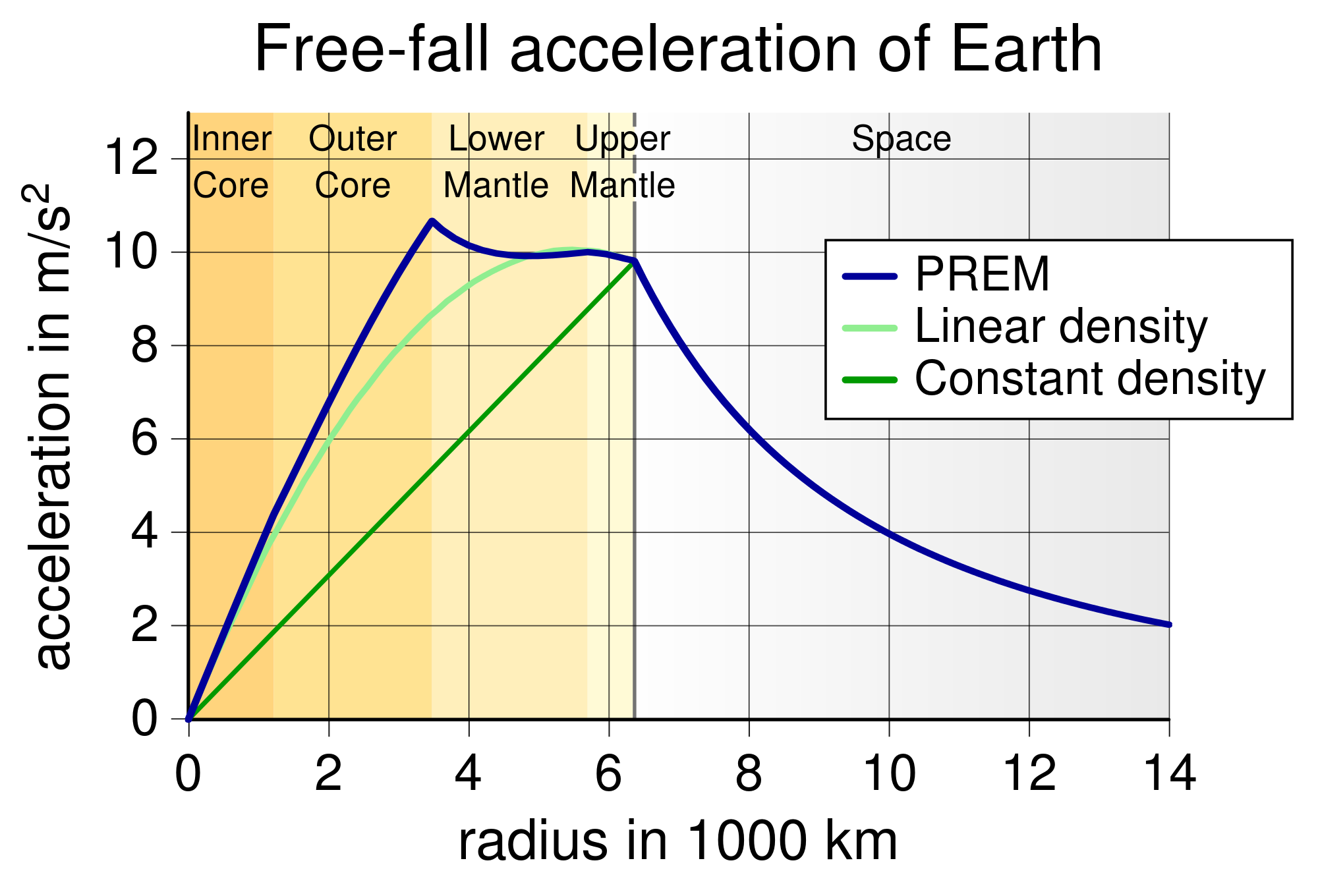 However, if the rotation speed of the planet is fast enough, the centrifugal acceleration could reduce or even cancel out the gravitational acceleration, causing the force to be unevenly distributed.

The equation for calculating the centrifugal force is as below:

With implementing the Netwon's Second Law

The result equation would be as below:

As the orbital period is constant, we could conclude that centrifugal acceleration would be proportional to the radius of the motion.

Therefore, the centrifugal force in the surface section would be the strongest, and become weaker towards the inner section, until it reaches zero at the planet's core. On the other hand, as the centrifugal force cancel out all the gravity force at the equator's surface, the resultant force would be the weakest in the surface section, and gradually more stronger towards the center and around the pole.

It is illustrated as the image below. 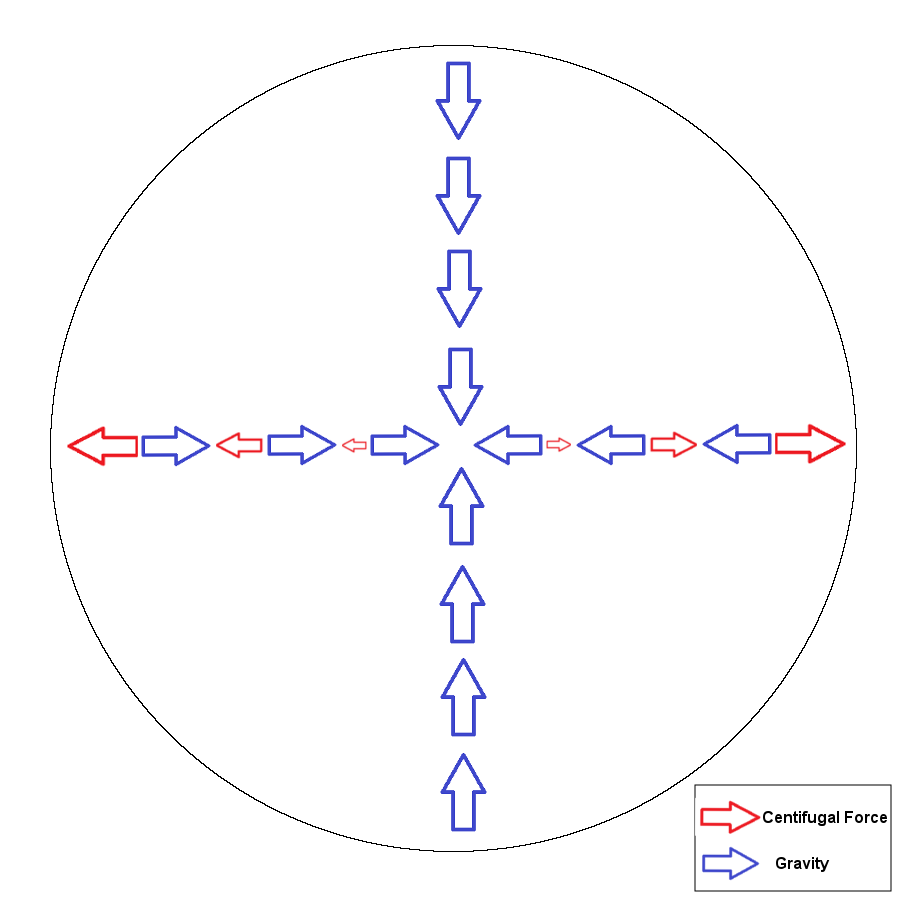 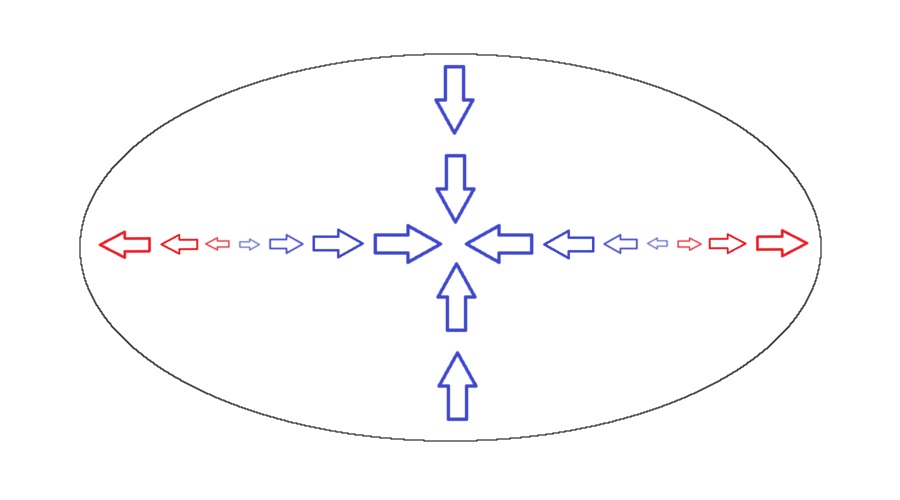 Therefore, it is not possible to form a Earth-sized planet with such rotation period.

Everything that's not tied down would obviously fly off, but the winds would also be so destructive that nothing would be "tied" down for very long. Your best bet for survival is to wait for most of the atmosphere to be flung into space.

Except that in that case you also die

As has been said, the Coriolis effect makes this world uninhabitable but lets look further:

We have a world where the the equator is moving at it's orbital velocity. What happens?

First, you can't walk around on the equator any more than you can walk around inside the ISS. You're in orbit, there's nothing to stick your feet to the ground.

Second, look at the atmosphere. We survive because there are about 10,000kg/m^2 of air above us, accelerated downward at 9.8m/s. We are at the equator, though, where the net downward force is 0.0m/s. that 10,000kg becomes irrelevant, you're in vacuum. Oops, you need 16,000 Pascals of oxygen to survive. You're dead.

Third, look at the atmosphere. We have 10,000kg/m^2 of air at zero pressure--it's going to go flying outward, the same as if you broke open a cylinder of air in space. You have other air on the planet, it will equalize pressure--and promptly get flung off into space. All your atmosphere very quickly goes into orbit.

Fourth, look at the ground. It's in free fall--nothing holds it down. The winds are going to toss about anything short of bedrock. (That is, until the atmosphere is gone, then you'll just get a surface made of a mass of disconnected bits.)

Finally, lets look at the planet as a whole. Remember, one of the required characteristics of a planet is that it have gravity strong enough to have pulled it into an oblate sphere--the surface of a planet is at basically equal net potential. (Yes, the Earth is bigger at the equator than around the poles. Stop the Earth's rotation and you'll leave the equator dry and the poles under a very deep ocean.)

However, we have already defined the potential at the equator to be zero. Oops--the planet can't have any gravity anywhere. You have a spinning disk of zero thickness that can't be reasonably called a planet at all.

You asked about planetary stresses. There will be none, although total destruction will of course occur. By rotating the planet faster and faster you are actually reducing the stresses that hold the planet together. As you spin the planet faster and faster, the imaginary centrifugal force appears to throw things outwards (but really, they are just going faster, and so resisting the gravity force, becoming lighter). So the atmosphere will fly off into space, along with the sea. As it spins even faster, internal pressure which has been balanced against gravity will start to dominate, bulging the planet at the equator (its already this way), so expect a lot of volcanoes and earthquakes. The surface will continue to bulge and deform, both from having speed to overcome gravity and also due to magma underneath pushing up. The crust will break up, get drowned in lava, churned up and eventually everything becomes liquid magma. The planet will keep expanding as it rotates faster, due to the internal pressures.

Drops of this liquid will eventually start to lift off from the equator. This is not really due to stress, but that the imaginary centrifugal force now balances gravity. Or to put it another way, the equator is moving so fast as to have entered orbit, and it is now weightless. Spin things a bit more and the planet will start to gently dissolve into a spinning collection of lava blobs in higher orbits. Somewhere here you'll start running into major problems in HOW you are adding rotational energy, since it's no longer a solid shape but a bubbly, blobby mess.

76
The opposite to Worldbuilding: World Destruction
51
What would a planet spinning fast enough to allow geostationary orbit near the surface look like?
9
How would one get a small moon spinning?

51
What would a planet spinning fast enough to allow geostationary orbit near the surface look like?
5
What would a world with uneven gravity look like?
2
What would life be like on a planet that spun just fast enough to negate gravity?
3
Why would a planet be spinning fast enough to fly apart?
1
How would fast rotation affect gravity?
0
How high does a tower have to be, so that centrifugal force launches a payload into space?
14
How large can surface gravity anomalies grow before the planet becomes uninhabitable?
8
Life on giant planet | Can centrifugal force reduce gravity?
1
How long would a planet that losses its gravity take to break up?
9
How would one get a small moon spinning?