Could an unmanned solar plane go not only above the clouds, but also so fast that it always is in the day-side of the planet?

A solar plane flying above the clouds receives sunlight $12$ hours per day, but there is a need for batteries to fly in the night. Such plane could fly continuously for decades without even fearing the degradation of batteries and it could be very much lighter given that batteries weight approximately $\frac{1}{4}$ of solar impulse

From a basic analysis of the problem I see these issues:

Could these issues be circumvented to create a solar plane without batteries capable of continuous flight?

o.m.'s conclusions are correct (if you like my answer you should up vote his too).

Plugging in realistic efficiencies shows that certain sized craft could do this in theory. However, solar power isn't very potent and we don't have a good mechanism for turning solar power into propulsive power. So although physics doesn't forbid it, we don't have anything engineered that could do it now.

Assumptions, Constraints, and other trivia

I'm not deriving much of this from first principals, I'm starting with my basic background and education. If you need the justification for some of these, please read the references.

Use the 4 equations stated above:

Then solve for various flight regimes.

I plugged this into a spreadsheet (along with calculations for speed of sound, mach number, etc.) and this is what I got:

Edit1 about 3 hours after initial answer I was off by a factor of 1000. I've updated this chart. Green cells show possible size/altitude combinations given 100% efficiency in solar power collection, engine thermal efficiency, propulsive efficiency, etc.

Edit3 about 2 days after last edit I have not changed the answer substantively. Instead for the realistic scenario I change the $\frac{C_l}{C_d}$ to 50% of the maximum value. Then I converted the charts to read what % of propulsive power the solar power could provide. So now the answer is in % rather than Watts. 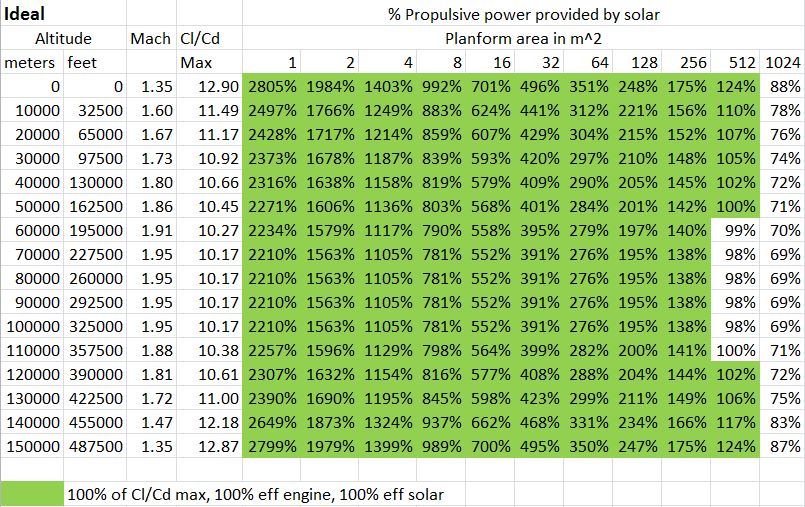 The spreadsheet shows the minimum thrust power required for straight and level flight at the required velocity at the altitude shown on left for a aircraft planform area shown across the top.

What this says is that your aircraft must remain quite small (smaller than $2 m^2$). This vehicle could never be manned (but that's not a requirement, so it's OK).

If you plug in realistic efficiencies for these parameters (overall optimistic engine efficiency could be as high as 40% and very optimistically solar efficiency of 30%***), you would get a chart that looked more like this: 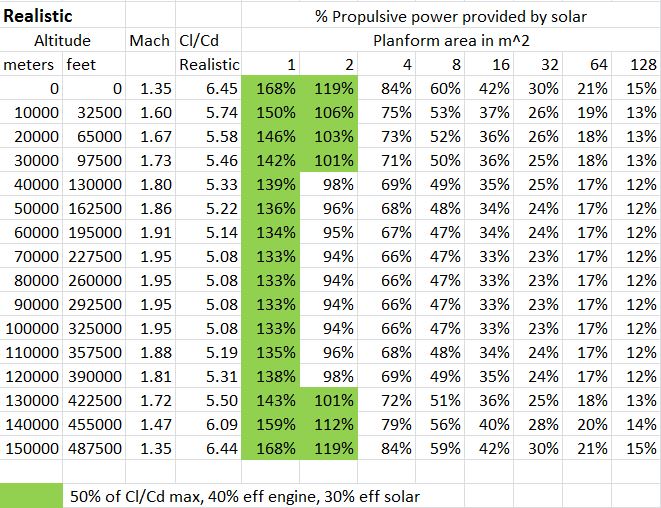 So it looks like a well designed and small enough aircraft could be made. Granted I don't know of a good mechanism for turning solar power into thrust so there would still be quite a bit of engineering work left to do, the physics don't prohibit such a craft.

Many US aircraft have the ability to perform mid-air refueling. From a propulsive perspective, they can stay airborne forever. Practically speaking they have flight duration limitations based upon things like provisions for the crew, lubrication for moving parts, etc. 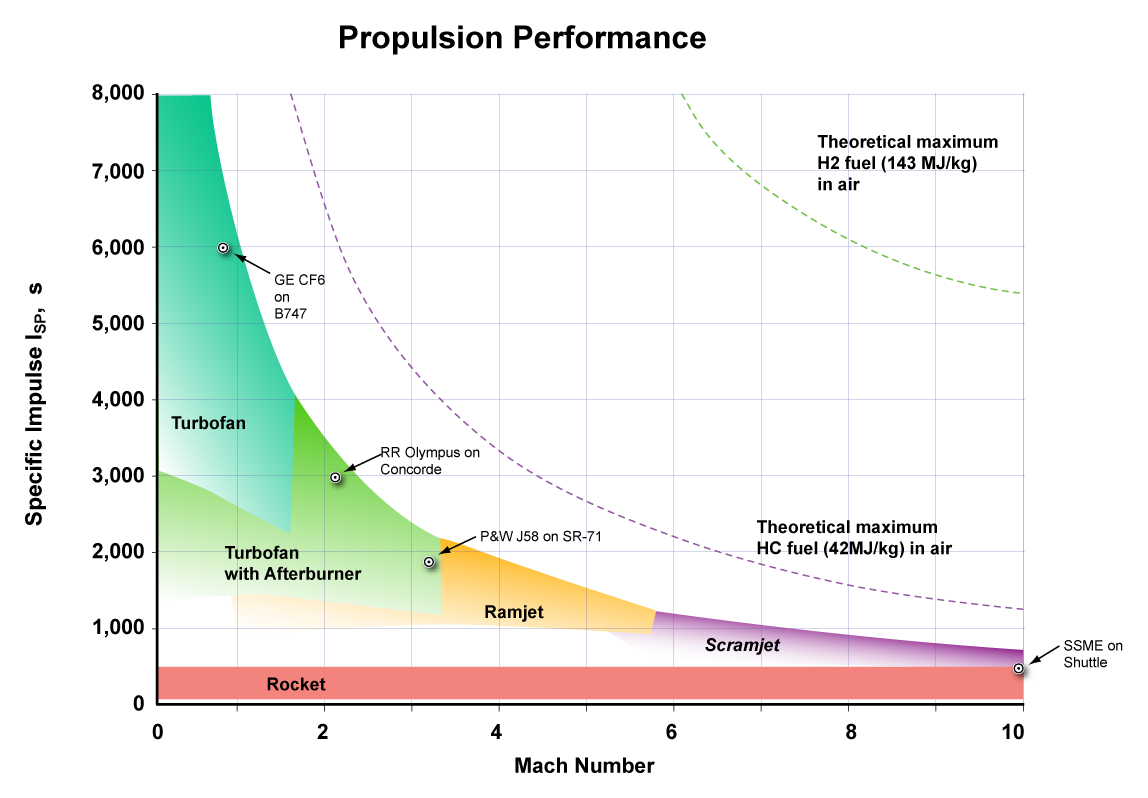 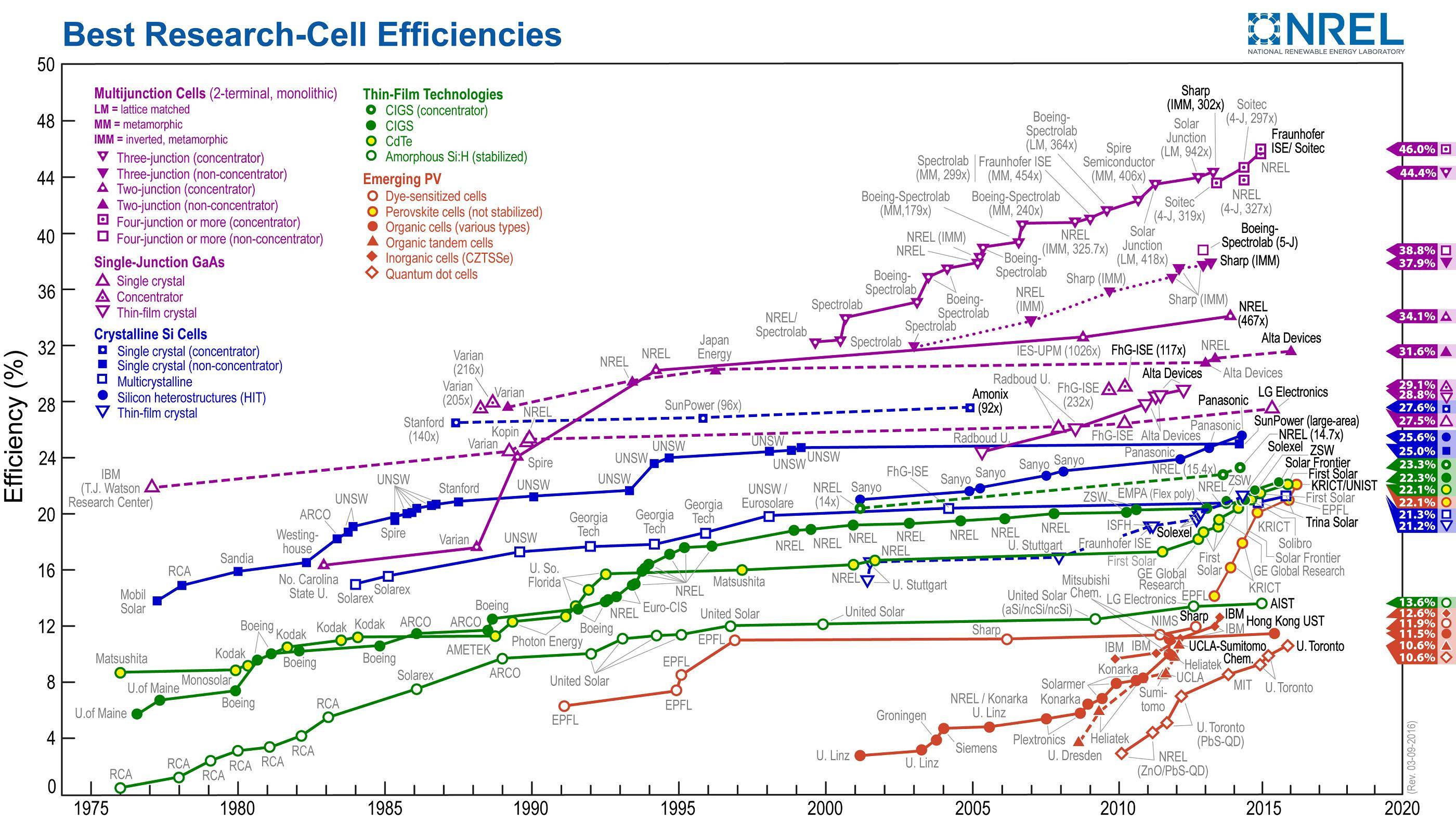 I believe that it will be impractical.

And that's without inefficiencies of the solar cells.

Not the answer you're looking for? Browse other questions tagged hard-science earth flight transportation .

2
Can a plane or ship circumnavigate blindfolded?
3
Kuehneosauridae and powered flight?
0
Sky Train Blimp Plane?
55
Would a steam powered plane be able to cross the Atlantic ocean?
5
Could a new planets plane be at a different degree as the other planets in our solar system?
4
Would a spherically distributed solar system inevitably become flat, i.e., develop a plane of the ecliptic?
10
How far would a goblin-powered plane go?
6
Insect-powered shoes
8
Realistic way of damaging a plane to lead to a survivable crash
5
Additional applications for advanced airships in my earth-like world