In December 2016, Winter Came. At first, it was called the Snowpocalypse and other cutesy names. The TV presenters in the Northern Hemisphere soon stopped laughing however. Snow kept on falling, and it never melted. More and more. And more. And more.

Scientists now reckon we are abruptly, in the span on a single winter, entering a new Ice Age. Mind you, the full glaciation onset may take a few years, it's not like kilometer tall glaciers can appear overnight. They think it will end up with a similar ice extent as the last maximum, shown below: 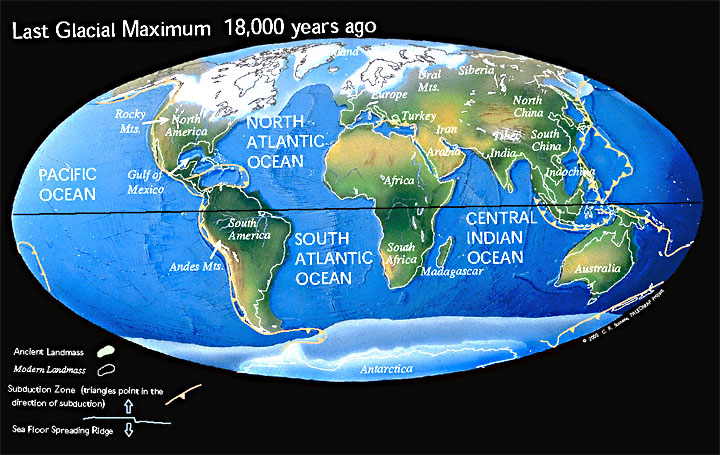 Currently North Hemispheric powers account for over two thirds of global GDP and about 80% of global military spending. Is there anything powers in Europe and North America, armed with the power of all modern technology, can do to retain their global economic and military status given the coming ice age?

I'm surprised no one's addressed the elephant in the room: WAR.

The world is about to face severe economic depression. Food availability is going to suddenly drop. Millions will be left without power, or adequate shelter as the temperatures drop day, after day, after day.

In a perfect world we would simply reorganize our resources, and struggle to help everyone out.

However reality is a harsh mistress.

Faced with starvation millions of people would pack their belongings and simply move south. This would constitute a migration similar to what we've seen in Europe over this past year.

As resources are already strained, and the further south you go, the less stable the governments become, this will invariably lead to political, and maybe even military problems.

Hundreds of thousands of Canadians and Americans flee to Mexico as the temperatures drop. The Mexican government, already rocked by allegations of corruptions, collusion with cartels, and dealing with massive waves of cartel violence can't properly accommodate these newcomers.

In parallel, as the conditions deteriorate, the Canadian military and government relocate to more temperate locations in the US (with their government's approval, and under certain conditions, etc.). As the Mexican government begins cracking down on "illegal" American and Canadian refugees, as well as seeing their own resources (especially real estate and food production) dwindling, the Canadian and American governments have to make a choice.

This choice comes in the form of a massive invasion of Mexican territory, under the pretense of defending their immigrated citizens from the corrupt Mexican authorities, and rampant cartel violence. Realistically, this invasion will succeed in taking down organized Mexican government and military in a few short weeks, if not days.

The Canadian and US authorities now take control of the Mexican territory and begin flushing out the cartels, establishing food production, etc.

This is a realistic scenario. Anyone suggesting that northern countries would somehow sit quiet while being buried under mountains of snow, or that countries such as the US or Russia would stand by and allow their populations to starve are being .. let's say naive.

Speaking of Russia, they would probably invade Ukraine, and other states, such as Afghanistan. Only this time, they won't be screwing around. They will put entire villages to the torch, because now it's a matter of survival. They will have a limited amount of time in which to move their major manufacturing centers south - before they are buried under so much snow that the machines and technology is lost to them forever.

China will likely experience massive unrest. The northern population will seek to escape to the already crowded south. The government will have to step in and stem the tide of desperate people who will be fleeing wherever they can. Already a massive importer of food, China cannot hope to feed their 3 billion strong population. They will have to face either allowing a very large number of people to starve/freeze, or invade a neighboring nation to provide them with the needed agricultural and living space.

Seeing how India and Pakistan are both nuclear powers that will be quite an interesting conflict.

And so, is there anything that North American and Europe can do?

Frankly, the best, and realistically only thing they can do is invade their southern neighbors. I expect that a new age of colonialism will be sparked, with European countries invading African nations, and Canada/USA invading Mexico, to start with, most likely Cuba, and maybe some other nations as well.

In a time of global panic, crashing economic markets, dwindling food supplies, and facing the end of their civilizations, these nations will have little choice other than breaking out of their "We're all friends" mentality, and resorting to more time-worn traditions such as "the guy with the bigger gun survives".

While the new ice age will absolutely be devastating, I see no reason to believe that it will significantly alter the balance of global power. Glaciation will decimate the economies of Scandanavia, Russia, and Canada, which will lose most of their ports. Scandanavia and Canada will lose virtually all of their agricultural output.

The Northern US will be flooded with snow from the Canadian border south to the Missouri and Ohio rivers and East to Manhattan. New York will become landlocked within a few decades as sea levels drop, though we could dig out a harbor as that happens, if we were so inclined.

Fortunately for us, we'll likely still be able to produce enough food to feed everyone. We'll still have warm, open ports in the southern part of the US, and we'll be able to rely on domestic manufacturing to supplant any major losses we face due to disrupted supply chains and global chaos.

Europe will find itself in similar conditions, with northern areas devastated, but southern areas (everything South of mid-Germany) ice-free. Winters will be much harsher, and crop yields will fall. Unfortunately for Europe, they have a higher population with lower agricultural production than the US. Famine will likely be widespread. The UK will end up almost completely covered in ice, though large areas of ice-free land to the south of the UK will be uncovered by retreating seas.

However, most of Western Europe has the economic means to buy food, even at grossly inflated prices, and the industry and technology need to mass-produce greenhouses and hydroponic equipment. Eastern Europe will be the hardest hit, after Scandanavia.

Russia will lose a large part of its agricultural land, as well as any ports in Northern and Western Russia. However, based on current geopolitical trends, it will likely respond by expanding through its southern neighbors to access new farmlands and trade routes.

China and Japan, as major food importers, will likely also be hard hit by the new ice age, even though they will remain mostly ice free. Japan, like Western Europe, probably has the economic resources necessary for importing enough food to feed its relatively small population, but China will face famine.

The hardest hit areas will be poor countries, despite the fact that many of these nations are in equatorial regions where major glaciation won't be a problem. Local agriculture will likely be devastated by the changes in temperatures, as small, subsistence farmers have fewer means to radically alter their crop growing patterns. The urban poor in these countries will likely starve en masse as they are no longer able to afford to buy food, even if their countries can keep growing it in sufficient quantities, due to surging demand from Northern countries.

Ultimately, as with many global issues, it will be the poorer countries who are hardest it, and the wealthiest countries who suffer the least. With a few exceptions, such as the almost entirely ice-covered UK and the Scandanavian countries, wealth and power disparities between rich and poor countries will likely increase, and we may see a return to some colonial patterns of behavior. Through all of this, the rich countries in the Norther hemisphere will likely remain firmly in control of the global economy.

It will vary from nation to nation. The United States for example is large enough that it can probably retain a good portion of its power. Southern Europe, while not as wealthy and powerful as northern and central Europe should be alright as well.

Northern Europe and Russia are in pretty big trouble. But like the US China is large and south enough that it should retain most of it's power as well.

Australia is an interesting one. While not generally seen as a world power it is fairly wealthy and militarily strong. Cooling temperatures would possibly make its climate more temperate as well, which could mean more food production for them.

The powers in the middle east would likely fare somewhere in the middle. While not particularly impacted by the ice the likely collapse of the global economy would mean a significant cut in demands for oil. But like Australia the middle east could potentially get nicer to live in (I've been there, its really hot...)

Global temperatures will fall drastically. This will lead to a decrease in food production and a large part of the world's population will likely starve and global norms and the economy will collapse.

With wealthier nations under intense pressure, or being wiped out all together there is no support system for weaker poorer nations. Which already deal with many problems.

Massive conflicts over resources ensue and there is little poorer/weaker nations can do to stop the richer stronger powers from invading toward the equator and taking over things.

So in the end the answer is...it sort of depends on each nation's situation.

Not the answer you're looking for? Browse other questions tagged government climate ice or ask your own question.

20
Is there a man-made or natural event that can cause an abrupt climate change within hours/a day?
3
If We Push the Ice A Little Further South
3
New York in an Alternate Ice Age
34
Dropping ice in the ocean to stop global warming
3
Weather patterns in an ice age
3
Weather and climate during the next Ice Age
9
Climate in an ice age
1
Making ice in the tropics