A naga is a snake with a human's head and torso. I want my naga to be huge, probably seven or eight feet tall. However, if you look at a picture of a snake in real life: 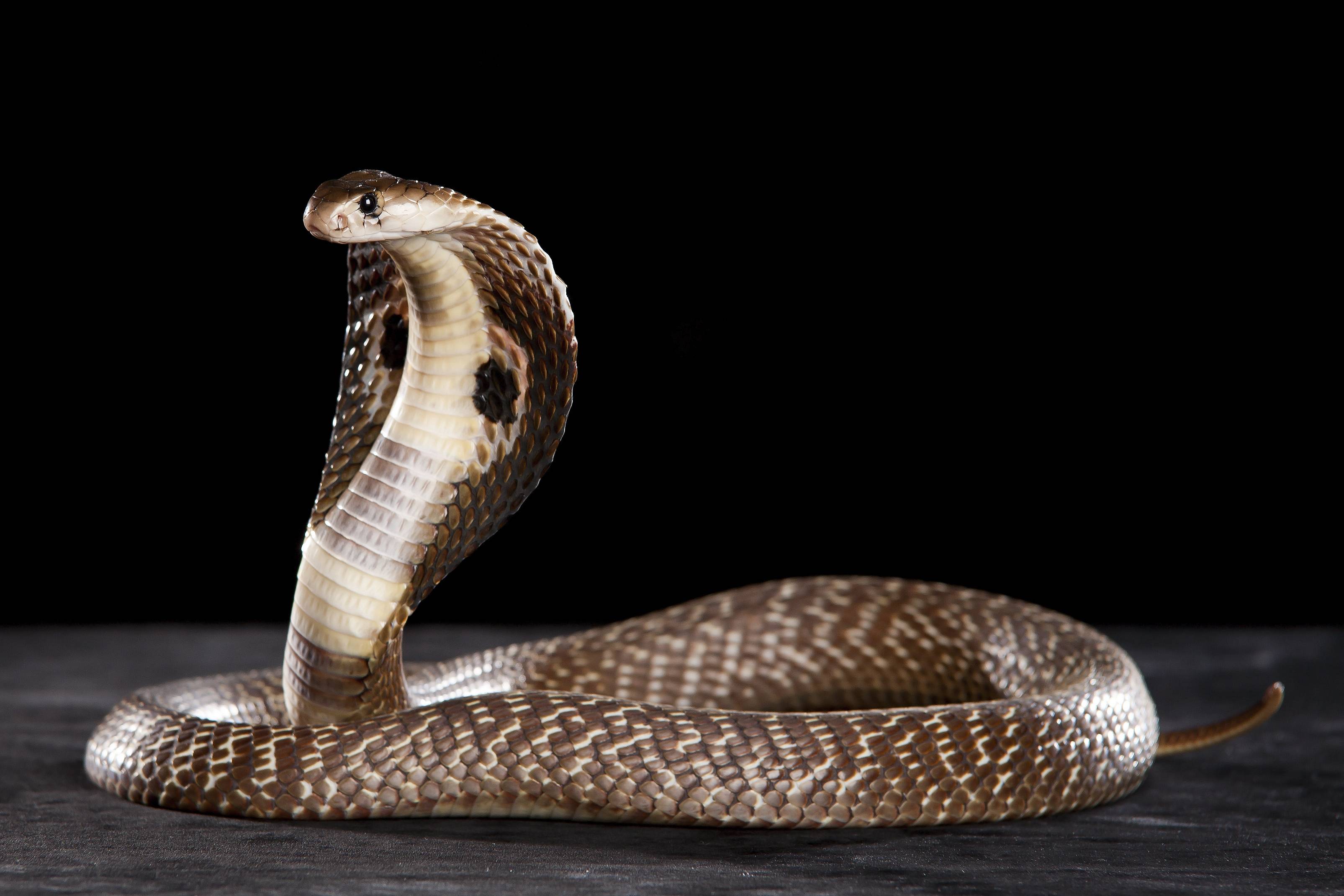 You quickly see that only a small part of a snake's body provides it's height. Would this limitation carry over?

So, if I want my naga to stand 7' above the ground when it lifts itself upright, how long would the entire creature need to be? 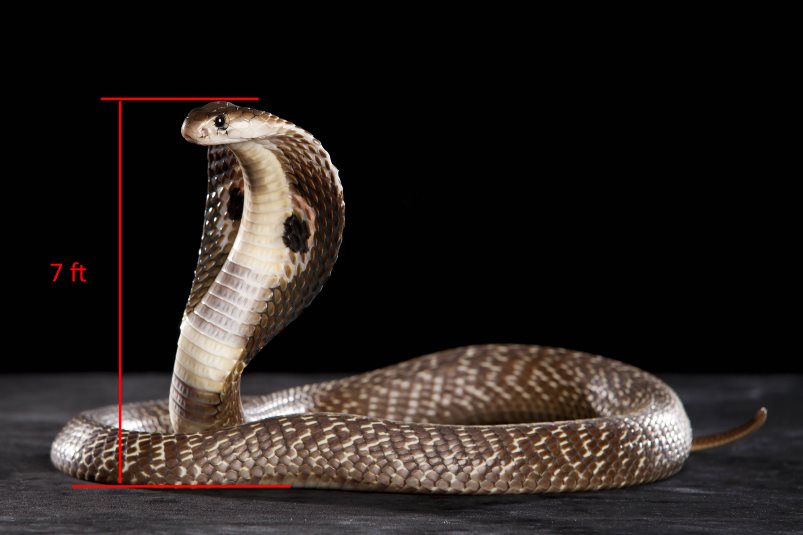 It's not just the strength of the muscles holding up the snake, it also has to do with balance etc. If the human half is significantly more dense than the rest of the snake in body mass, then you will need more tail to help balance it out. It also will matter if you want them to move standing at 7-8' or just be able to loom. To loom they can concentrate and add height. To be moving around they need a bigger better base.

So to start I think you need ~24' long body as a minimum if they can generally function at the 8' height. and 18' if they are normally 6' but can loom up to 8'. These would be minimums, and the 'tails' would be fairly large and thick. If they tapered down like a snake to fairly small diameter, then you might be doubling the length.

Otherwise you will likely have a very awkward snake man.

The ability of a snake to lift a portion of its body off the ground is limited by the strength and weight of that particular portion and is more or less unrelated to the total length of the snake. As long as the human portion was strong enough to lift its own weight (i.e. is anatomically similar to a human) the snake portion can be any length you want (as long as it is big enough to keep the human portion from falling over). I see no physical issue with the various artistic naga depictions you can find anywhere online.

For the legless human portion to have the height of a regular tall human including the legs, the head and torso would have to be scaled up to almost twice the size of a human. This could put a strain on the heart, muscles, and bones, so you might want to fiddle with the body part sizes and shapes, especially if your naga spend a lot of time in their 'raised' position. They might have to have Hulk-esque limb proportions. It isn't too big though, and the whole thing is supported by a very stable snake base instead of spindly human legs, so the square-cube law shouldn't give you such a huge problem.

Let me establish two points first that the previous answers sort of miss.

With these two details, the proper height and length of a naga can be determined.

In essence you are combining two creatures together, so where and how would they do that? The upper torso and lower torso of the average human male are usually about the same length, though in most situations the lower torso area is slightly the longer of the two parts. This is usually only by a few inches though. But what this means is that of the part of the snake that is "standing" in the picture, a little less than half of that will be the upper human torso of the naga.

If the naga in its "standing" position will be reared up at about 7 feet, than nearly 3 and 1/2 ft will be the upper human torso. With that being said, we now have a solid proportion for how big the rest of the snake would need to be. Now that snake looks to be rather small, not nearly the full 14 feet its said to be able to be at full size. With an understanding of how big the "human" torso section of the snake would be, if we could find the actual size of that snake in inches, then we could gain an understanding of the naga's proper size.

Basically, lets say that the marked section of the snake is actually 7 inches, that would mean that we would have a 1 to 1 ratio: for every 1 inch the snake is, the naga would need to be 1 foot.

This is because we're trying to find the scale of the "standing" portion of the snake in regards to when its enlarged to be a naga. If that portion is 7 inches, and that section is supposed to represent the height of a 7 foot human male, then each inch would scale to be one foot.

Now for a bit of an anatomical side note

Even though the naga wouldn't have legs like a normal human, it would still be able to rear up and "stand" as normal human would do. Whether it would be able to move like this and slither is up to whether snakes can actually slither and move when they are reared up as well, or simply the creative liberties of the person creating the naga. BUT, and this is a big but, the lower (aprox.) 3 and 1/2 ft of the naga would still in essence act as its "feet" or legs when it comes to the proportional act of standing up

So what this would mean in total is that if the average cobra can become 18 feet at its full length, then the full naga would be able to pulls out calculator

...Oh wait, it seems I've forgotten to mention something. The example of the snake being 7 inches at "standing" was completely anecdotal. To actually calculate the height and length of a naga you would first have to find out how "tall" the standing portion of the real life snake is in INCHES, based off its individual species and current age,

Another anatomical side note

As a cobra gets older it also gets longer, and the "height" of its standing position will scale up. But would a naga's "standing" height also scale up, causing its upper human torso to eventually become much bigger than that of a normal human's, or would its upper torso stay the same relative size as that of a human's? Because if the upper torso does not scale with its snake body and become proportionally bigger, but rather stays the same relative size as the human body, then that means there is a bit of anatomical discrepancy between the way a snake and naga scale, and that it may not be as much of a 1 to 1 ratio as previously stated.

And as a final anatomical note, as I previously mentioned, when a snake looms up at a humans eye level they are purposefully extending themselves up much higher than they usually do. When scaled to a naga, if a snake can loom up to a humans eye level at -let's say- 6 feet, and their total body length was 18 feet, then you would have to proportionally increase that for the naga accordingly. If the snake was 1 ft "standing" and could loom up to six feet, this being about 1/3 of its total length at 18 ft total, that would then mean that a naga could, at 7 ft tall, and 126 ft long, loom up to (aprox.) 42 ft. Which would be nearly twice as tall as a Storm Giant in the current 5e universe of dnd.

As a final note, I want to emphasize this scale only works if you are trying to scale Nagas based off real world snakes and proportions. This scale does, though, provide a good reference for how long a naga would have to be,

Not the answer you're looking for? Browse other questions tagged creature-design mythical-creatures scaling .

11
What would be the best fighting styles for a humanoid with a low center of gravity?
19
Anatomically Correct Naga
16
Is a four armed arboreal reptile as described viable?
23
Physical correctness of trolls with high regeneration ability
7
Help me Explain this Alien's Traits
27
How to build a fortress to survive against mythical creatures
3
How heavy would a Naga be?
5
Anatomical Review: Would the way I designed this semi arboreal Imp be biologically feasible?
4
Increased flexibility for dragons?