What would be the major weather patterns on this map?

I drew a little map of a continent, but there is one area that I'm not sure about; the climate. As for the location of this map, remove North America and replace it with this map. The northernmost land graces the fiftieth parallel, and the southernmost the twenty-fifth. As for the longitudinal lines, the land goes from the 125th to the left and 70th to the right.

I was wondering, what would the weather be like in this map?

Another thing I forgot to say was what everything represents. I assume you can figure out rivers, lakes, and oceans, but the speckled part is a plateau, which I assumed would probably be a desert.

Because I forgot to say it, all other continents still exist except for the ones specifically mentioned. And I don't know the distances in miles, but I did give latitude and longitude lines, so I hope you can figure it out from there. 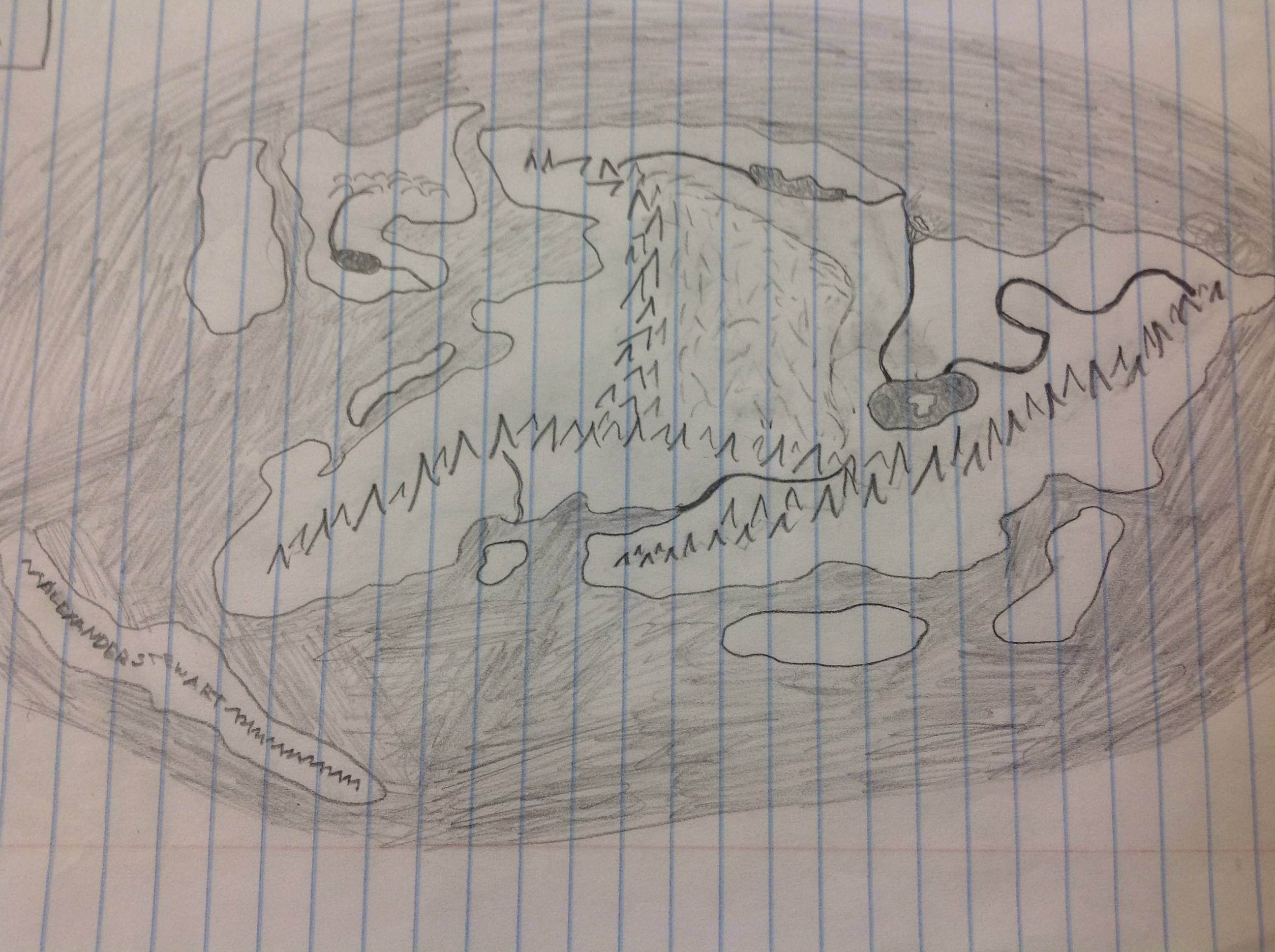 Climate, on earth anyway, stems from the intersection of temperature, precipitation and humidity. All are affected by wind speed and that's affected by air flow patterns which are driven by the cycles of hot and cold water offshore.

So - figure out the incident sunlight at the equator, and figure the heating/coolign flows of the ocean currents, which drive your offshore winds and temperatures.

Overlay that flow on your continent, and wherever the offshore winds push into elevation you will have rain, and where the winds move away from the mountains you will have drought/desert (even if it's cool).

Elevations will drive your rivers (for the most part water will collect in the mountains and flow to the low points, except for some instances where local geography causes the opposit).

Look for how your terrain drops away to the coast; the highest navigable point of all of the rivers will fall along a line of terrain called the fall line (look at the relative position of inland cities on the US east coast). These will be some of your oldest cities - though maybe not eht biggest.

Look for protected bays, not directly exposed to ocean currents, or anyplace that is along a COLD current flow -- those areas tend to have fewer storms and more stable weather.

It's a fun exercise. Good luck.

I believe that one primary trait of this continent is that its center would not receive much precipitation. The mountains would get most of the rain approaching from the west south and east. Systems from the north could help, but the changing elevation from that direction looks quite odd.

Your northern coastline appears to have a higher elevation than a substantial portion of the interior of the continent. You have one river running parallel to the coast for a long distance rather than running straight to the coast. This would require a substantial ridge between the river and the coast (possibly with spectacular cliffs!). Similarly, your river from the east to the large lake actually meanders away from the coast towards the center of the continent. A similar ridge (ridges shown in brown) would be needed to keep it from running to the coast. After reaching the lake, the outflow is then able to flow straight to the sea.

The shapes of the river also appear to show that the elevation of the interior of the continent may sharply increase once past these river lowlands, perhaps rising to some kind of plateau between the arms of the mountains. The sharp increase in elevation would cause precipitation at this point. There would be numerous smaller streams and rivers carrying this out to the main river systems.

After dropping precipitation at the edge of the plateau (marked in yellow), the dry air would have little left to drop as the elevation kept steadily increasing until another sharp increase at the mountain ranges. Remaining precipitation would be dropped there. 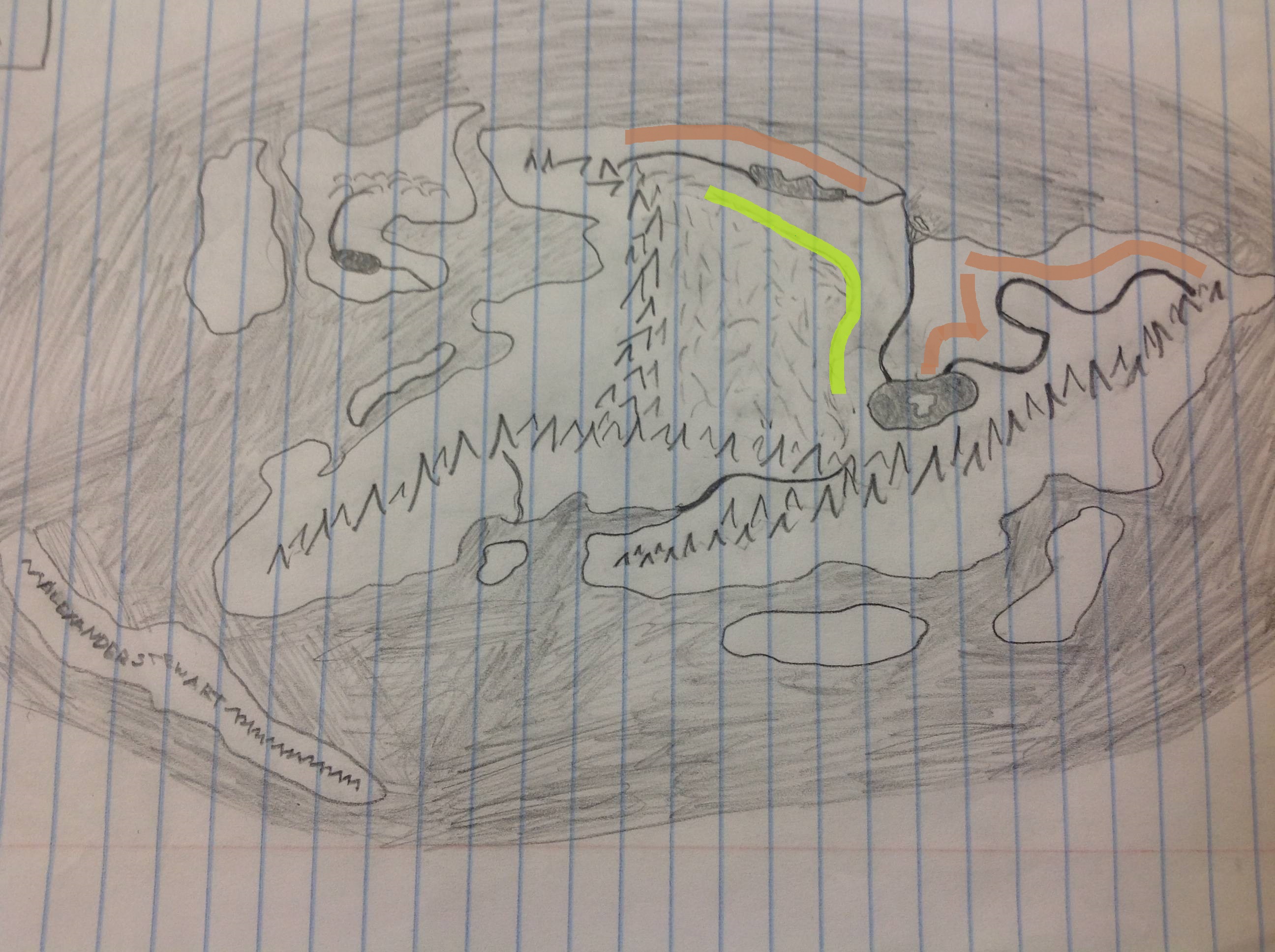 Yeah, I can't give it in a nice presentation, but I can tell you now that we understand that North America has been transformed into this island continent, with all else being equal...

The one thing you're lacking - not a bad thing - here is a wide open gulf coast that helps the Mississippi basin. North America would be a barren desert in the center if it weren't for the gulf (not saying a desert is bad, just saying it wouldn't be the same).

Your mountains are obstructing moisture from the south. You will get cold dry air from the north in the center and temperate humid climates on the very east and west coast. You can give the central desert a nice fertile basin by using fossil aquifers, but I don't think you'll get any formidable rain from the north.

Your east and west coasts will be extraordinarily fun to hike about, I think.

Not the answer you're looking for? Browse other questions tagged environment weather or ask your own question.

10
What would the weather on this continent be like?
5
What weather patterns would occur on this map?
7
Constructing a desert area
5
How would a large arctic mountain range affect the weather?
3
Weather Patterns in a Pocket Dimension
4
What would pressure belts look like on a world with continuous land?
9
Are my deserts accurately positioned?
4
Cold Weather Patterns