One of the Stack Exchange's most popular topics is remaking mythological and fantastical creatures with realistic, believable anatomy. Usually, the answers go that for an angel's anatomy to be believable, he'd either have wings like a bat instead of a bird (the former's being essentially very stretched-out hands connected by skin) or have very long arms, a very large chest and hollow bones.

But all these angelic posts have just one thing in common--the angels have the traditional number of wings, that being two.

But millions of years ago, there once lived an aerial vertebrate that is a cut above the rest. 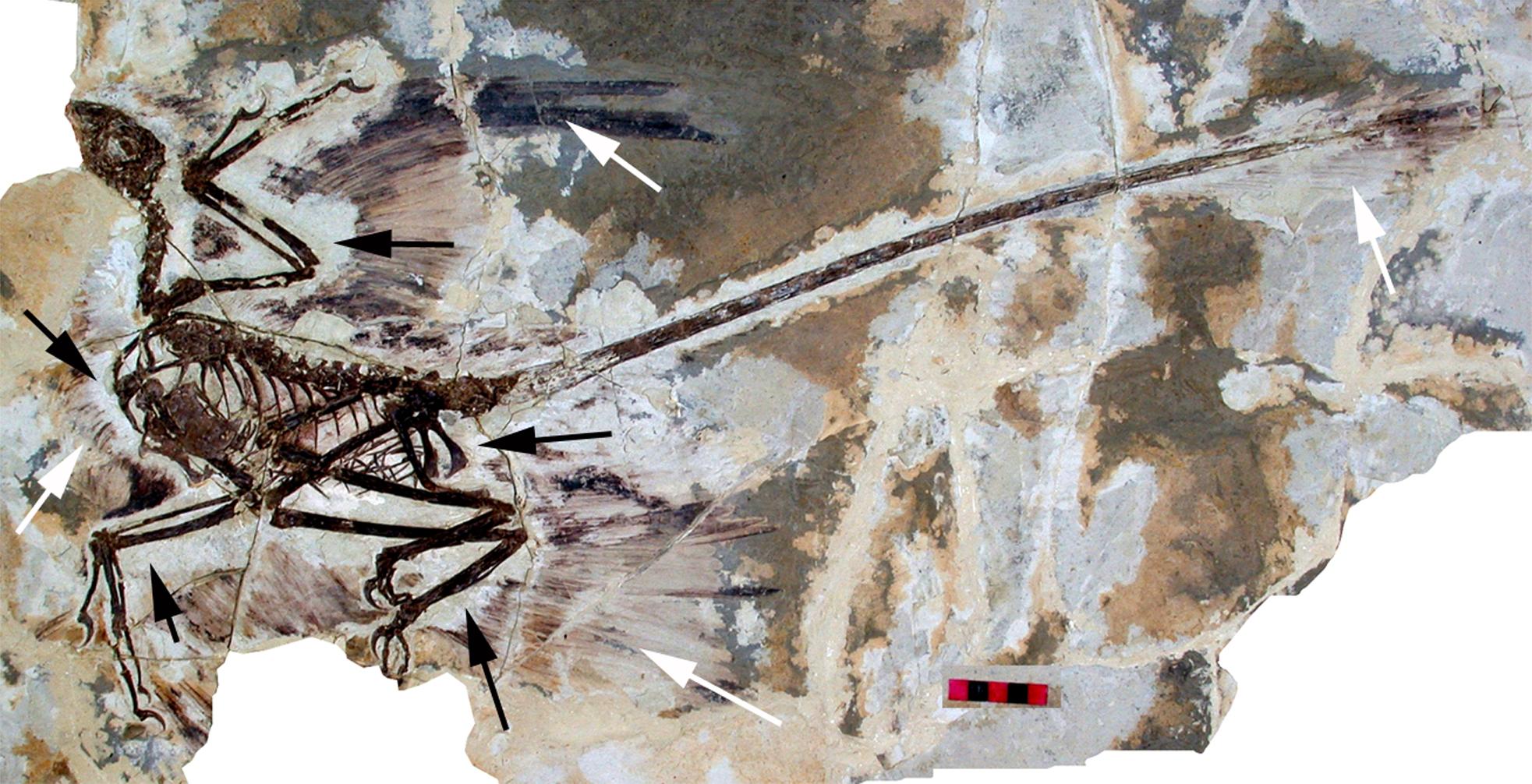 Meet Microraptor zhaoianus. This small dinosaur is unique in that all four of its limbs had been upgraded into wings.

It should make sense, therefore, that the existence of a four-winged dinosaur should make a four-winged angel a possibility. Even so, since the anatomical differences between an aerial dinosaur and an aerial primate are vast, questions need to be taken into consideration:

There have been many questions investigating large flying creatures. The ones who try for any kind of realistic biology/physics estimate basically boil down to:

Sorry to break it to you, but when using the biology or science-based tags there will be no Angels, no Griffins, Hippogriffs, Dragons, etc.

--> Adding a second set of wings to your angel creature will really not help your case: the physical limitations apply independent of the amount of wings as they're based on the creatures mass (depending on volume) vs. its muscle strength.

The fundamental principle which lies behind the size limitations is called the Square-cube-law. There is a Wikipedia Article explaning it in detail.

1 Some sources suggest that the Quetzalcoatlus, the largest known (supposedly) flying animal would have been unable to take off with a weight of 200kg.

Your 4 questions are all answered by reference to the noted dinosaur. I’ve seen it reported on TV with studies trying to figure out what flight posture it would use etc. Here is a more recent study:

The tail operated as a lift-generating structure, meaning that Microraptor can accurately be described as a five-winged flier, not just a four-winged one.

Notably, Microraptor was never an efficient flier: it suffered from extensive drag in all simulations and was aerodynamically unstable, performing best when moving quickly. It was well able to glide no matter what the feather or wing configuration: in fact, we concluded that all Microraptor needed in order to glide effectively was a flat wing surface – feather asymmetry, anatomy and configuration didn’t make that much difference (Dyke et al. 2013), a discovery which supports the view that the evolution of theropod wing and feather anatomy did not occur within an aerodynamic context.

So, not particularly good, with structures just beginning to be repurposed for flight but far from optimized toward that new purpose.

It doesn’t have advantages. That’s why birds don’t look that way now. Yes, it hinders the ability to walk on the ground (they were aboreal anyway) and again that’s why they don't look like that now. Powered flight? Maybe, barely. Posture: limbs straight down (see the linked article).

So an angel or other creature like this would clearly show that flight is an accidental possibility of anatomy evolved for other purposes, only slightly evolved toward that new direction. This might also have compromised the old purposes, perhaps more significantly than the gain of new purpose.

So, not good at flight. Needs another hundred million years to compare with what we’re used to. Maybe OK for (e.g.) making a tent over a clutch of eggs, especially handy for incubating a larger brood since it wasn’t as warm blooded as modern birds and didn’t have the huge flight muscles to generate warmth. The anatomy shows its history more than its future.

As it turns out, David Attenborough's Conquest of the Skies episode 2 was on PBS yesterday. It features the Microraptor, including realistic CGI reconstruction of its appearance and behavoir walking, climbing, and flying.

I have been thinking about the 4-winged angel and how to broaden my scope beyond the sadly stereotypical. And get that green checkmark!

The problem with bilateral symmetry is that vertebrates are so committed to 4 limbs - as has been pointed out. But our cousins the echinoderms, bilateral as larvae, acquire a more open-ended approach to limb number by switching over to radial symmetry. A radially symmetric creature with 5,6, 10 or more limbs is no stretch at all for the echinoderms. Lovecraft's crinoid-like Old Ones were angelic in that they had wings (3, though often drawn with 2 - stereotypes again!) and were radially symmetric. 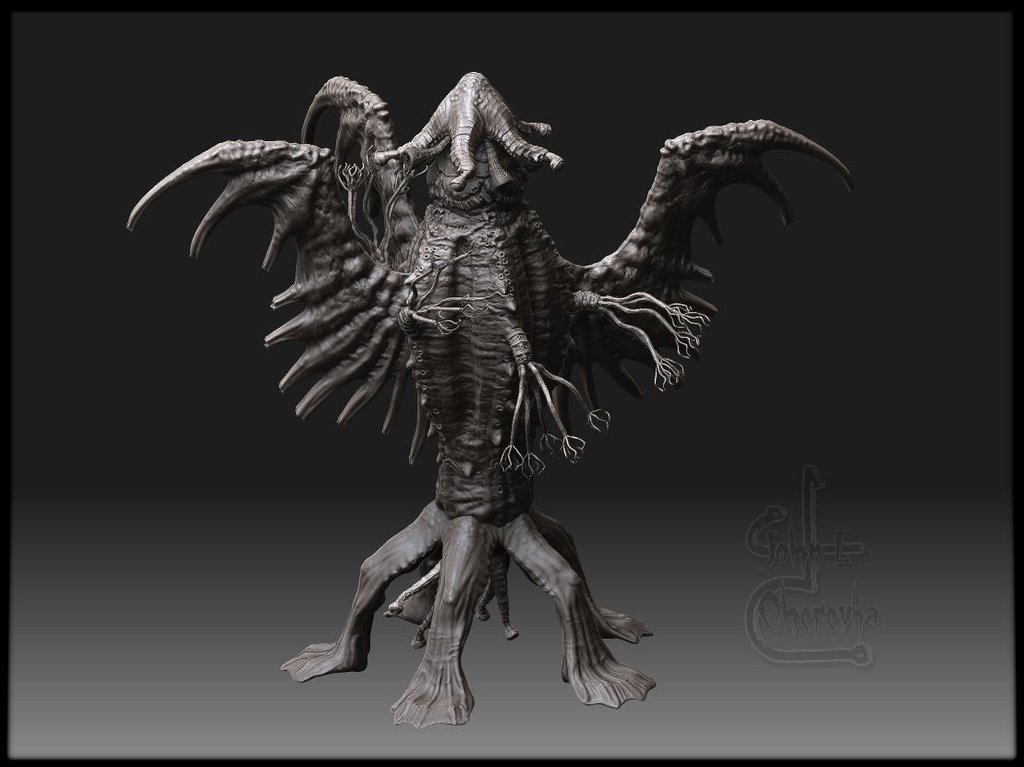 So: how might a radially symmetric echinoderm angel look? Sea cucumbers are radially symmetric with 5 major poles; here I have used 4 for wings with the 5th left for another appendage. Please imagine it flying high above that gravel. 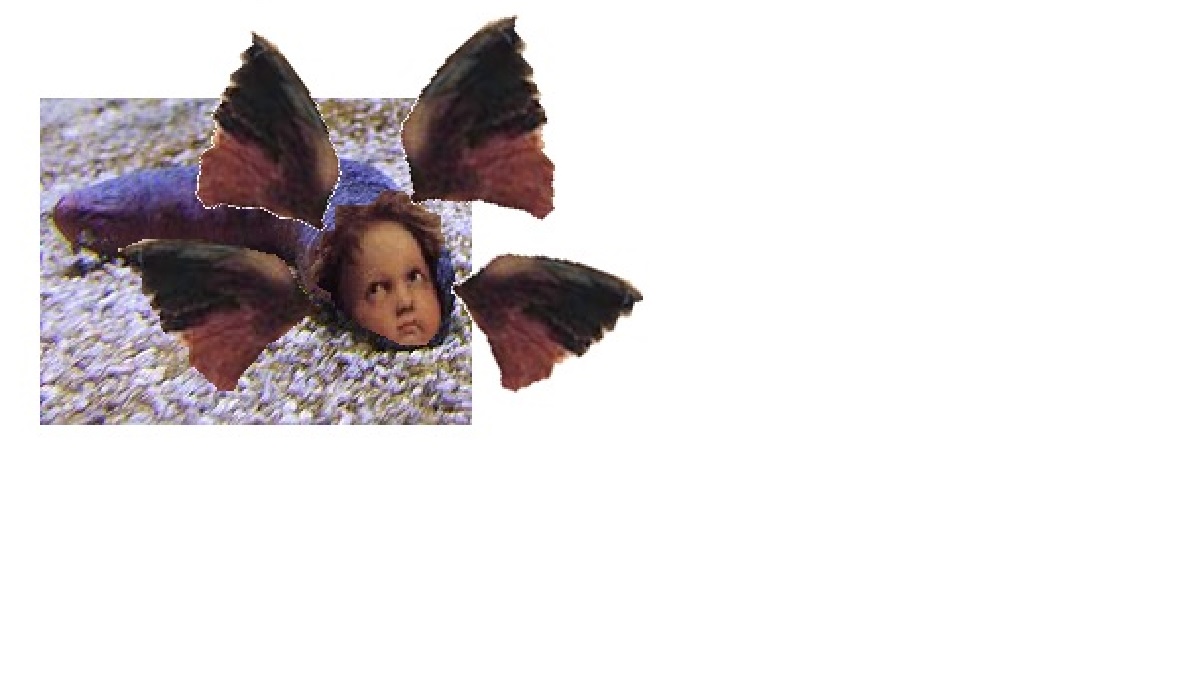 For a more standard angel I used a 10 arm starfish - all 4 wings and arms and legs! The head had to go in the middle. 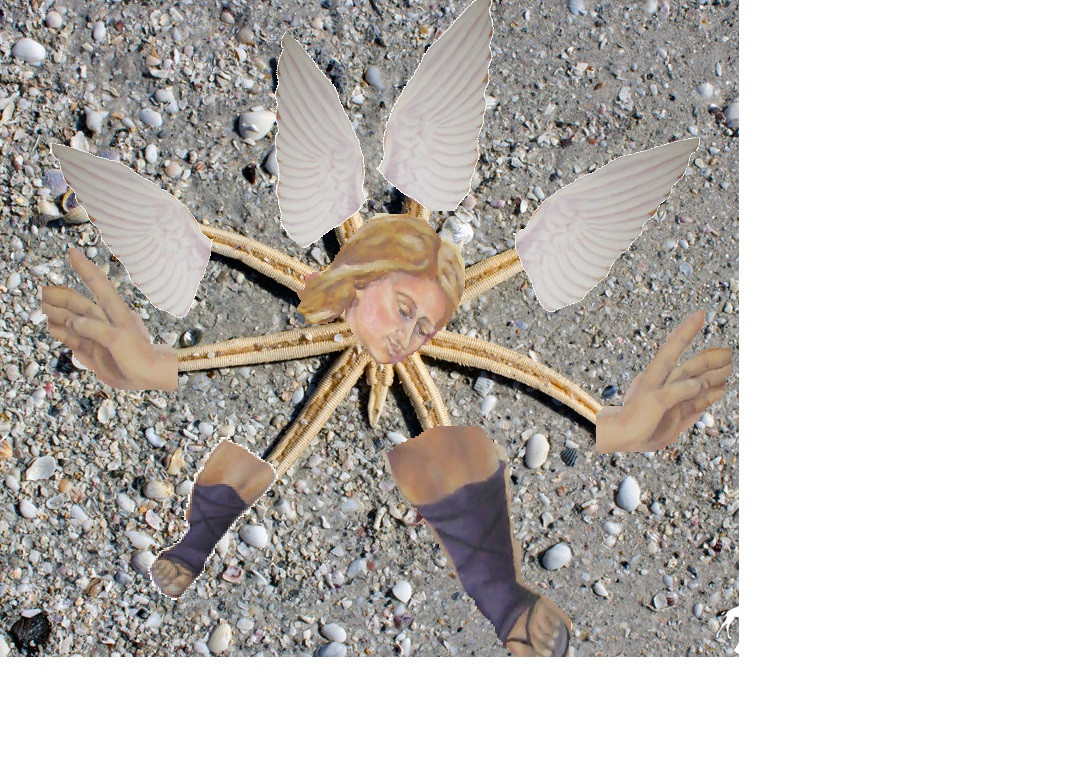 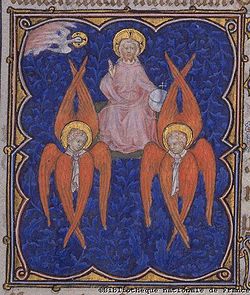 These 2 are cuties but there are many other depictions on line. Interestingly seraph translates as "burning one" and also "serpent"; googling for seraph turns up some Hebrew pages on various snakes.

In any case - maybe your 4 winged angel is a seraph who is keeping 2 folded up.

Not the answer you're looking for? Browse other questions tagged reality-check biology flight angels or ask your own question.

71
Can you simply scale up animals?
23
What is the maximum size of a flying creature?
6
Wing surface area for large flying creatures
3
The Two Types of Angels

3
The Two Types of Angels
13
How would a four or five winged creature, such as a microraptor, fly?
2
Winged Humanoid Physics
25
Would this winged human/angel be able to fly?
5
Is a four-winged bird with two wingpairs atop of each other feasible?
18
Would an evolutionary predecessor for winged quadrupeds start with four legs and gain wings? Or start with two legs and wings and gain extra legs?
4
How Would a Six-Winged Angel Fly?
3
How would a four (or more) winged dragon fly? what would the wingspan be?