What is a good way to estimate the mass of spacecraft?

I am trying to design spacecraft with realistic mass estimates, so that I can "accurately" design fuel requirements and calculate potential speed.

Obviously the mass of a ship is going to vary widely based on in its dimensions and purpose (a 500m long freighter will have a very different mass than a 500m long battleship). That being said, I am trying to come up with some reasonable estimates and real world comparisons so that I could quickly estimate the mass of any ship.

I have looked at the mass of nautical ships, aircraft, real spacecraft, and fictional space craft; the numbers seem like they vary so much that I am not really sure where to go from here.

Here are some rough approximations I have gathered so far as a starting point.

As for technology level, I am thinking something like 300-400 years in the future. I want to create something with elements of space opera, but based more on hard sci fi/realistic constraints. Because FTL is out, I am imagining a solar system where travel between plants and satellites is relatively easy and quick (like a few months to outer solar system instead of years), where the OORT cloud is the untamed frontier, and if humans have left the solar system, its only in generation ships which effectively are cut off from the rest of humanity.

Edit After digging around on the site that Jim2B listed, I found this excellent section on interstellar trade: http://www.projectrho.com/public_html/rocket/basicdesign.php

There are a couple of paragraphs on estimating the size a ship based on the tonnage of its cargo, which could of course be used to calculate tonnage from size. This is really perfect for my purposes, because even though I asked about mass specifically, the real problem I am trying to solve is how large do ships need to be to accomplish "x" task. I was probably going about it slightly wrong as I was trying to think in terms of "how large is a plane, or an ocean liner, or a battleship, etc." The approach from Atomic Rockets is much more systematic.

Please read the Atomic Rockets: Basic Design. It has everything you need to know.

There's no "one size fits all" answer

The reason no one can answer your question specifically is because spacecraft are not designed generically. Each spacecraft is designed to optimally complete its mission. A spacecraft designed for one purpose (e.g. a Pluto flyby) will only be used for this mission. We will also never see that one again, the ship is gone for good because it's too expensive to include fuel/propellant for the return trip.

Make sure the hot end points towards the ground: 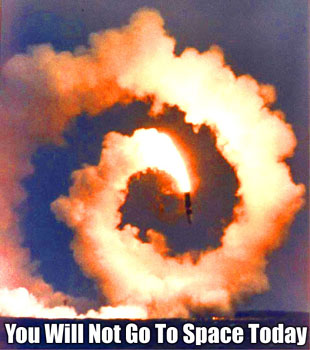 If you don't, then you will not go to space today.

The Tyranny of the Rocket Equation

These difficulties with building spacecraft are sometimes called (both jokingly and not jokingly) the Tyranny of the Rocket Equation. For another take on this Tyranny, you might just read the story "The Cold Equations". These equations are unfeeling and don't care about intentions, feelings, or most other "warm" sentiments.

The following is excerpted (with editing) from Atomic Rockets:

Say the mission needs 5 km/s of $\Delta V$. Each kilogram of payload requires propellant to give it 5 km/s.

But that propellant has mass as well. The propellant needed for that original kilogram of payload will require a second slug of propellant so that it too can be $\Delta V$ to 5 km/s.

And for the rocket equation, everything that is not burned fuel/spent propellant; counts as payload. That includes such things as engines, structures, radiation shielding, food, people, life support, unburned fuel, unused propellant, etc.

Even in the most advanced and optimistic designs, you're going to have 3 kg of fuel/propellant for 1 kg of everything else combined. Unless you're using very high specific impulse engines, you won't go on a cruise around the Solar System. People will only travel from point to point if they have a specific mission to perform.

Each specific mission will have its own specific requirements ($\Delta V$ requirements, mission payload, etc.) and, therefore, each spacecraft will be designed for its mission.

One thing these have in commmon, is >2/3 of their starting mass is propellant tankage.

Spacecraft design is like no other designed craft used on Earth. The closest thing to spacecraft design would be high performance military aircraft. However, spacecraft are more expensive per pound by at least an order of magnitude.

The one possible exception to this would be spacecraft designed using the nuclear pulse propulsion. Those might be built using similar cost per pound of construction to high end naval construction (aircraft carriers and/or submarines).

NOTE: I used fuel and propellant and fuel somewhat interchangeably. However, except in the case of super high efficiency nuclear or chemical engines, this almost always not true. Fuel is the expendable that provides energy. Propellant is the expendable with which the ship exchanges momentum to accelerate your ship.

For the dozen or so unmanned space missions I've been involved with, payload density usually ran about the same as water. That does not include boosters.

So, as a first cut, you need to figure out the volume of your spacecraft, then multiply by 1000 kg/cubic meter.

It's pretty clear that this estimate is not off by an order of magnitude, although the density may be somewhat less. Consider surface ships, which by their nature have densities less than water. Manned space vehicles have much heavier walls (pressure containment) but large voids internally. Also keep in mind that density will probably decrease with increasing size, just as it does with ships. Hull thickness remains fairly constant with size, but hull area only goes up with the square of vehicle dimension.

Not the answer you're looking for? Browse other questions tagged space-travel spaceships .

5
Feasible single-staged reusable spacecraft
4
Man-powered spacecraft for sport
13
Can I detect one ship arriving in an otherwise abandoned solar system?
6
Can electronic warfare be used to bring space combat into visual range and protect fighters/bombers?
7
Remotely controlled battle starships
9
Could an astronaut in a near-future space ship survive transit through our asteroid belt?
15
Cockpit or Bridge?
7
Estimating thrust and kg fuel for a generation ship's journey to Alpha Centauri