I am building an apocalyptic world, and I am wondering about the effects of mountains on nuclear bombs. I'll start by defining what I am talking about.

Something like a 10 megaton bomb, set off at ground level at the base of the mountain.

Firstly, what protection would the mountain provide if it was between you and the explosion.

And secondly, if someone was on the top of the mountain witnessing the explosion how much damage (physical, radition or otherwise) would that person take? Would it kill them from that distance and elevation, or would they just suffer Gamma radiation?

Mountains and other geological features act just like obstacles do against waves: they make the waves bounce and reflect.

A nuclear blast has three primary effects that are detrimental to your health:

1a) The heat pulse. Immediately upon detonation, there is a very strong "light" coming from the bomb. It is like the Sun, only many times worse, depending on how close you are. This heat pulse can be enough to set flammable materials on fire, and to char other materials. 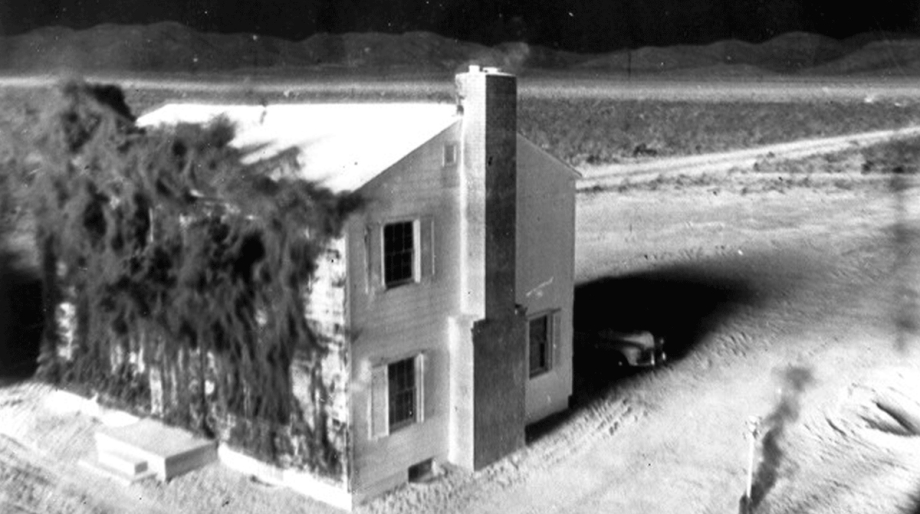 The front of the house, facing the intense light from the detonation, chars

But this heat pulse is stopped if you find yourself in the shade from it. This is why the now infamous civil defense movie "Duck & Cover" was made, because if you are on the fringes of the blast area you might save yourself from some serious damage if you get yourself into the shade quickly.

A mountain — obviously — would provide quite excellent shade.

Then again: a large mountain is may times larger than impact area of a nuclear bomb, even in the megaton range.

1b) The radiation pulse. At the detonation, there is also a pulse of radiation coming directly from the bomb. This is not quite as easy to protect yourself from because radiation like neutron and gamma are not stopped by being in the shade, but instead dampened.

However... if you have an entire mountain in the way, then that is enough to dampen the radiation into nothingness.

2) The blast wave. The blast wave is a sudden and very severe blast of wind. At close enough range, this blast pulverizes houses, sends vehicles flying, knocks over structures. 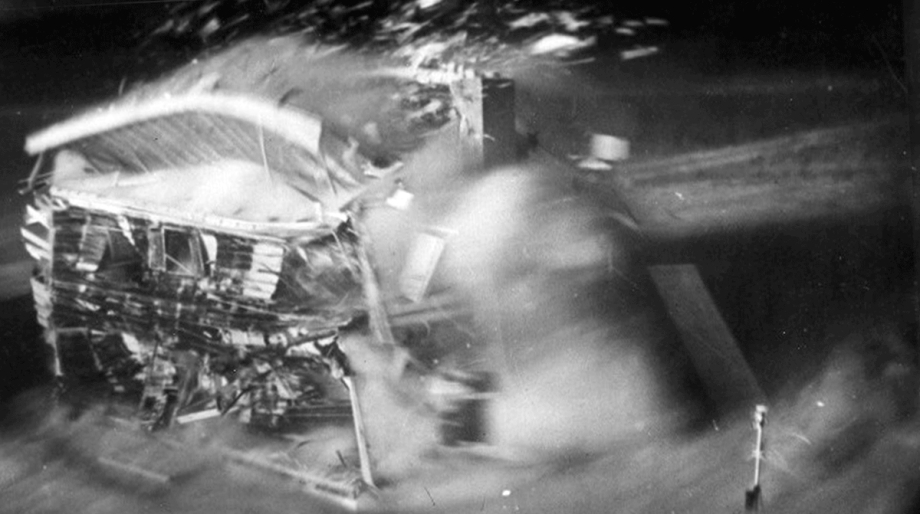 The blast wave has just hit the house

Again: a mountain would deflect this wave. If you are in the "shade" of a mountain, you'd be quite safe.

And yet again: the blast zone around a nuclear blast is smaller than a mountain like Mount Fuji.

Here it a video that shows the heat pulse and the blast wave very clearly. This is the Teapot Apple II shot from 1955. This is a "small" explosion at 29 kT.

3) Fallout. Fallout is the radioactive waste products of the blast. Fallout — unlike the direct pulse of radiation at the blast — do not have a very significant range. Think of it more like a big cloud of dust. If you see the cloud in the distance, then that is OK. What you do not want is for it to come down on top of you so you start breathing it.

Another aspect is important here for that which you said: your explosion is at ground level. This will make the fallout much more intense, because it rips up lots of dust that the radioactive fission products stick to. At 10 MT, getting caught in that fallout can be very dangerous. Compare the Japanese fishing boat Lucky Dragon 5 that got caught right in the plume after the 15 MT Castle Bravo shot. All crew members got acute radiation sickness, one died of secondary effects.

Finally there is the visual aspect that we all know when it comes to nuclear bombs: the mushroom cloud.

If we are talking about a 10 MT bomb, the mushroom cloud will rise to about 20-30 km in altitude so no mountain will be able to hide it. This picture... 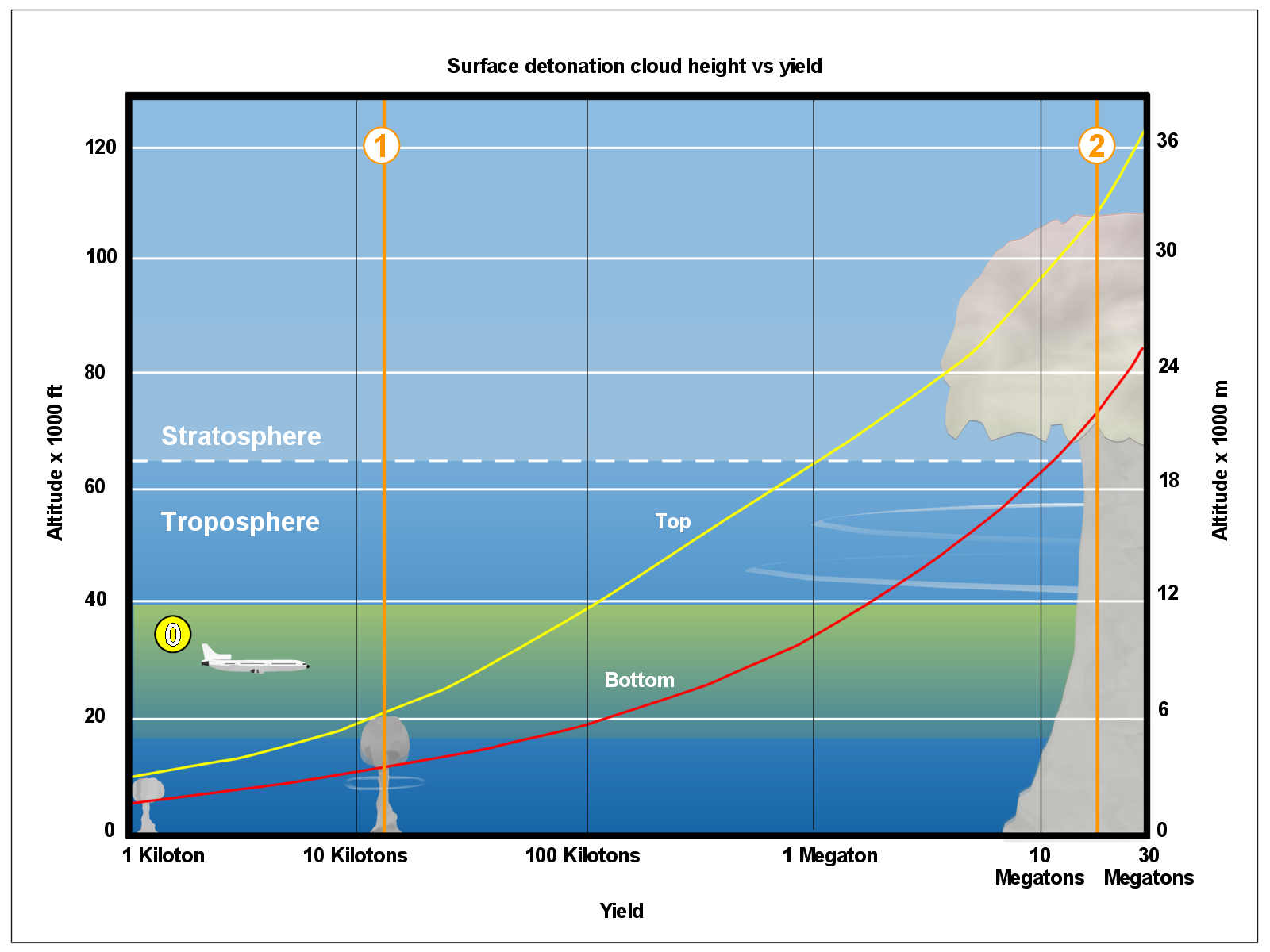 ...shows the size of mushroom clouds for different yields.

As for anyone on top of the mountain.... well it all depends. Do they have a direct line of sight to the blast? If so a 10 MT shot can cause anything from first to third degree burns. The blast wave can travel up the mountain side, so — again — if they have a clear line to the explosion epicenter, they might get hit pretty bad by the blast. But the outcome can be tailored however you want it by simply adding shade and cover.

Oh and for the record... all that talk in the comments of "Oh the mountain will be destroyed!"? That is complete hogwash. We are talking about a mountain versus heat, wind and radiation. Rock doesn't give a hoot and a holler about that. There will be a crater where the explosion happens but it will not be very big compared to the mountain. By comparison; the Castle Bravo shot at 15 MT left a crater that was 2000 meters wide, but only 76 meters deep. That is to say the depth was only about 1 in 30 compared to the diameter.

Since it was a ground burst, the fallout will be severe. If it affects the character in your story, all depends on where the wind is blowing. If it comes towards them you can place them in a lot of trouble. If the wind blows away, they will be safe unless they wander into the blast area.

A nuclear explosion is, in a way, just like any other explosion.

The blast wave will take the path of least resistance. Of course it is a very poweful blast wave, which means that things such as buildings quickly come to offer no resistance whatsoever, however a mountain is far more solid.

What this means is that the blast wave will mostly travel away from the mountain, as well as up the side of it, but not over.

In other words, yes, being on the other side of the mountain will definitely protect you from the blast itself.

Radiation, however, is a different story. The radiation can, and will be carried over the mountain by winds, the blast itself, etc.

These days, however, nuclear bombs are not meant to detonate on impact. They are actually detonated above the target, because the blast is more powerful this way. This would mean that the blast is far more likely to be felt on the other side of the mountain (if the bomb is detonated slightly above it)

Well, that would depend on a few things:
1. Yield of bomb
2. Depth of bomb
3. Type of rock in mountain
4. Size of mountain

The size of the mountain has been dealt with. Type of rock would have to be specified. Dense rock would, of course, hold up against a nuclear blast much better.

Yield and depth of bomb would also have to be specified (an atmosphere/surface blast would not be very damaging). The amount of destruction would increase with the depth of the bomb until it reaches a certain point, where the rock would begin to contain the blast, reducing damage area. The maximum depth for highest effect depends on the yield of the bomb.

So, with a high enough yield device at the right depth, you could even destroy the mountain, but every speck of it would come falling back as highly radioactive fallout, which would then be spread by any wind. Of course, in this case, the denser the rock, less it will travel as fallout.

If, however, the blast does not destroy the mountain, someone standing on the other side would probably be protected from the physical damage, but would die of radiation sickness soon. Someone standing on top of the mountain would experience something akin to an earthquake, and he would get most of the radiation right in his face, since the fallout would probably rise to the top in the mushroom-cloud shape very fast. This is assuming he does not get roasted to death...

Not the answer you're looking for? Browse other questions tagged mountains nuclear or ask your own question.

2
The Great Plains Between Two Taller Mountains
6
Are the mountains and rivers on this map okay?
7
A world without mountains
2
Realistic placements of Mountains and the like
4
How would mountainous landscape look like after remodelling it with nuclear warheads?
9
How to make drooping mountains?
3
How do I draw these weird mountains on a map?