Limitations of magic as an energy conversion process

My world has magic and I would like to check a few things about it. Feel free to correct me if I'm way off-base.

My magic is basically an energy conversion process. You take energy from your environment and convert it into something else. For instance, fireball, light or other fun stuff. I should clarify that it only needs to look like a fireball, light or other fun stuff to the average medieval farm boy. It could actually be anything else as long as it has the same effects and visuals.

Anyway, to enable that process, you need a sentient caster with a body. The universe will not have it any other way (actually, it will, but it's not relevant here).

However, in order to convert energy, from what I understand, you need some more energy. This problem is dealt with the introduction of the Unbestanum effect. Said effect allows transdimensional particles to dump energy into our own dimension. It is as if you had an unlimited magical energy tank somewhere that you could tap into. The energy from the Unbestanum effect is what powers the energy conversion.

Consider the caster plus the Unbestanum effect as your conversion system. You still need to input something if you want a fireball, and that input is likely going to be air. Because air is just full of the heat and it's also right there. So, in principle, you take air, input it in the conversion system, and voilà, fireball. The conversion system is sufficiently powered to produce the desired amount of output because it's magic.

About how many rules of physics and thermodynamics am I breaking with that principle?

Taking that principle (and possibly adjusting for fewer broken rules), is there a limit to how many forms of energy I could output if all I had was air, unlimited power supply and maybe some ground (though I can't see why that would be helpful)? If there is, what forms of energy would I be able to output?

It depends on just what sort of energy conversion you want to allow. Let's go straight to the crazy end... I mean... let's find the upper limit to what's allowed by thermodynamics.

How much energy is that? Looking at the handy List Of Energies By Orders Of Magnitude we find 1 gram of air can power a small nuclear bomb, or a hurricane for a bit less than a second. That is a lot of energy.

Yes, if you allow wizards to convert mass into energy they can produce quite a large fireball. 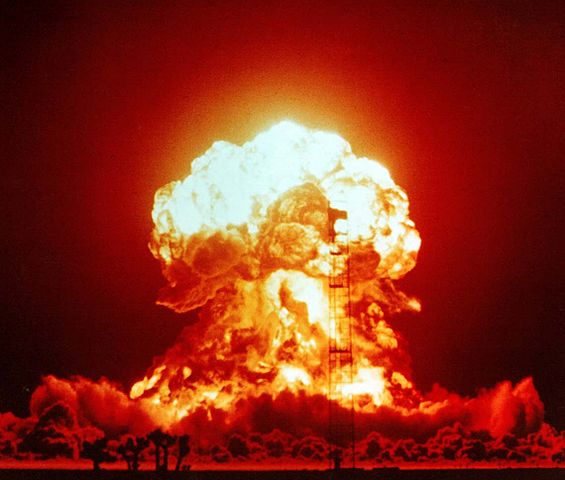 The only really limiting factor amount of air have available to you since you technically are using air every time you make fire. Of course you always add another Limiting element, perhaps something related to the caster, maybe there's some sort of limit of trans-dimensional energy one magic user can use at a time.

Also is theoretically possible to convert matter to energy so maybe you could use the ground in your casting.

Not the answer you're looking for? Browse other questions tagged science-based magic physics or ask your own question.

8
What could hard light be?

44
Wondering what would happen if magic was constrained by Conservation of Energy
6
Equation for magic system involving negative resistance and exposure time
2
What would be the positive and negative traits of a total matter to energy conversion drive?
8
How to operate telekinesis and a kinetic shield using science-based 'magic'
9
Figuring out the math for the Sphere of Meteoric Conversion
7
How much energy do plants produce?
1
How to keep a creature capable of matter/energy conversion from eating planets
5
Does “kinetic magic” (essentially telekinesis) imply unlimited energy?