Not sure if this is the right place to ask this but here goes...

I've been watching Daredevil and reading a few StackExchange questions here and there and got to wondering...

If someone/something with echolocation powers was listening to an audio recording, like music, or "listening" to a movie, would they be able to sense the performers/studio technicians that were in the studio when the recording happened? Could this be a way to get 3d "video" of the past?

The two main problems I see are:

How much detail could possibly be extracted from audio recordings about the environment in which they were recorded?

Typically echolocation skills are very tailored to one's individual body, and that makes it hard to use on movies. Movies are typically not recorded with the kind of microphone setups needed to capture the behaviors properly. One might be able to cleverly reverse engineer some mic positions, but to use those skills inuitively, one needs to have recorded the original with something like this. 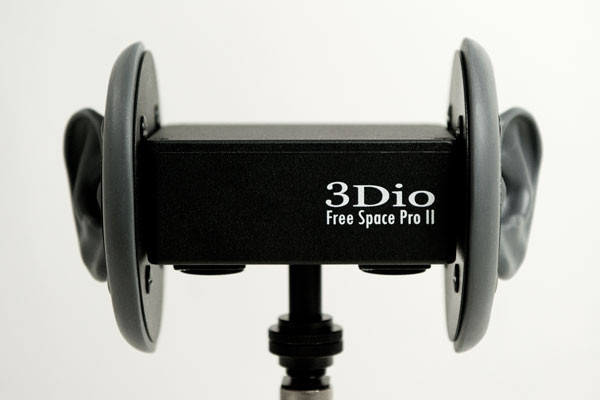 Tools like the 3Dio are designed to match the acoustic behavior of the average human head/ears. However, the results are typically only useful for headphones. If you intend your movie to be listened to over speakers, binaural recording devices like this are really difficult because they don't give much freedom as to what appears in each channel.

Even if you used a binaural recording device, you still would have trouble. See those squggly folds in your ear? They're not just for decoration. One of their effects is to "color" the sound differently, depending on what direction the sound comes from. The pinna, as it is called, along with your shoulders makes things sound different depending on which direction it came from. Your binaural recording would have to have a mold of your ears before this effect would be accounted for.

Think its a joke? Try this experiment with someone. I've had it work for me, and I'd love to have others try and report on the success.

I've done this experiment, with uncanny results. It indeed does appear that one can hear with one's eyes! It just shows how much more information goes into our heads than we think does!

I would say extremely little chance (although distance is more plausible). Recording studios (or anywhere that movies/musicians etc record audio) are setup in a way to limit any and all external sounds or are corrected via software that removes all excess noises. While recording, artists wear high end headphones to play the music in their ears. Movies, most background sounds are added in via software after the picture is recorded as filming in the middle of hollywood (or elsewhere) can be very noisy compared to what the director wants to contray. The most you could determine would be possibly the size of the room/"shapeish" and even then that is an incredibly small chance with audio quality being cut down during the formatting/copy/burn stage. Yes Echolocation usually references your own sounds, but with enough listening(daredevil powers) you may possibly be able to tell when his/her head is turned to give an estimate of shape/distance)

You would not get a 3d "picture" of the environment, but you may be able to get an idea of distances from the "focal point"

I recall this being done with multiple recordings made that record the shots fired in the JFK assassination. So yes, it can be done in extreme cases like a gunshot which gives a clear impuse-response in the recording.

Normal recordings express the sound of the room through reverberation. This is often carefully controlled to sound "right", like a hall of the desired size. The casual listener can tell if the room was small or large, etc.

The drummer's sound often gets picked up by all the other tracks, despite the best efforts to isolate it. If the drum sound can be distinguished from other sounds, it's certainly possible to determine the distances of the various reflections and perhaps figure out more about the room.

As far as listening to a finished product, no. The stray sounds are purposfully removed, and various tracks are mixed together with different levels, other modifications, and timing offsets.

Not the answer you're looking for? Browse other questions tagged senses or ask your own question.

7
Would uncontrolled intermittent ESP be confused with schizophrenia?
8
Objects detectable only with blindsight
0
Proud warrior race with terrible depth perception. How do they look?
6
What modes of transportation and vehicles would humans with echolocation and no sight produce?
2
How would plasma-based lifeforms interact with physical matter?
1
On a planet with a large amount of water vapor (steam) would senses evolve