In a fictional world, I'm trying to create a sword progression that makes sense. My two options are:

So my question is: would a granite sword be stronger than a steel sword, or vice versa? I know that granite is higher on the Mohs scale, but how would this translate to a sword?

Granite makes a nice counter top, but would not make a good weapon - not blunt, and most certainly not edged.

Keep in mind that even granite counter tops chip. If you were to make a sword-like thing out of it:

As far as steel goes please keep in mind that manufacturing good quality steel is actually a tricky process which relies heavily on the amount of carbon and other trace chemicals in it. Not all types of iron can be used to make good steel either.

There's a reason why Damascus Steel was so highly valued in the Middle Ages: it was incredibly high quality compared to anything else at the time. We actually don't even know what went into making it - the recipe has been lost for hundreds of years - however we do know that most of the other stuff was not very good by today's standards (although you could certainly kill someone with it).

And so, you can give up on granite weapons altogether, but should also pause and consider the implications of steel weaponry (good blacksmithing, knowledge of chemistry, etc.)

Assuming you are looking for materials for just swords, you will want to avoid anything very brittle, and anything too soft. A blade must be strong but must not shatter. This will pretty much eliminate wood, granite, and iron from your lists, though iron is a fickle beast and deserves some more consideration, which I'll get to in a bit.

Let's look at Earth history for a minute and see how blades developed in real life. Early blades were mostly Flint or Bone or Glass, but relied primarily on razor edges or blunt chopping power to achieve anything, and would more easily be classified as axes or knives than as a sword.

The first real swords were made from Bronze. The history of bronze itself could fill a book, but suffice to say that Bronze is hard and strong enough to be used in a sword, but is not really comparable to modern weapons in any way. Bronze is relatively soft, but it does have the potential to hold a wicked sharp edge, and it is easy to sharpen due to its softness.

Bronze quickly fell out of style once Iron weapons became feasible. Pure Iron is difficult to acquire, and in the process of purifying it yields a wide variety of end products suitable for use in tools and weapons. Most iron is quite brittle, but working the metal in a forge or using other techniques can soften it and harden it into a useful blade.

This is where Steel comes into the picture. Really, Steel is just Iron that has been worked to the point of becoming softer and stronger. The exact chemistry involved is super complex and there are a variety of steels available, but the technology involved developed as a result of iron working. Something to note about steel is that the iron used in the process can create varying results with the same process. Japanese Iron, for example, is basically the worst. This is ironically why Japanese swords tended to be so well made: in order to produce a weapon worth anything, the swordsmiths had to work the iron over and over and over to get a consistency they could use.

Beyond Steel, there are very few metals (or alloys) that seem to be suited to sword making. I have read that Iridium, when worked similarly to iron, might produce a similar, yet superior alloy to Steel, but I'm unfamiliar with the science involved and Iridium is super rare. A theoretical alloy of Iron and Aluminum may produce a blade-worthy alloy, but no such metal has yet been created. My only other suggestion might be some ceramic derivative. Ceramics are usually quite brittle, but there are some used in knives designed for non-detection that hold an edge well and resist shattering. There may be ceramics suited to full swords, but none of which I am aware. One exciting possibility is a material called Metal Glass, which is a metal structured amorphously like glass; this material has properties somewhere between typical metal and ceramic.

Others have explained why granite is a poor choice. No, what you want is obsidian. 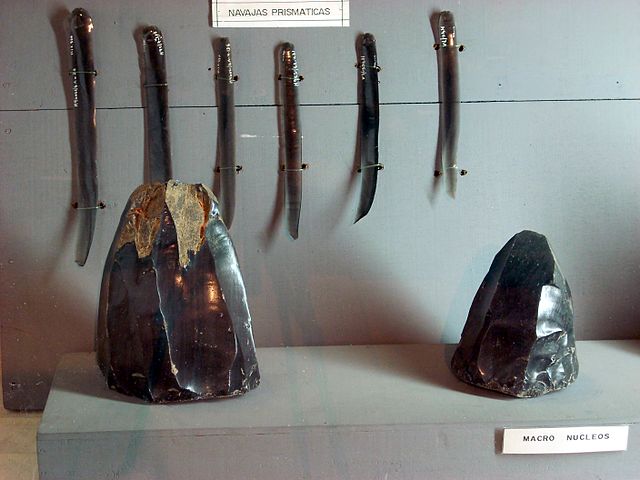 Raw obsidian and obsidian blades from the Mayan site of Takalik Abaj. Source

Sharper than steel, so sharp it's used today as a scalpel, obsidian was used by Central and South American pre-Columbian cultures who lacked metalworking and steel. Rather than making an entire weapon from it, it chips rather easily, flakes would be embedded in a wooden club to make a practical weapon known as a Macuahuitl. 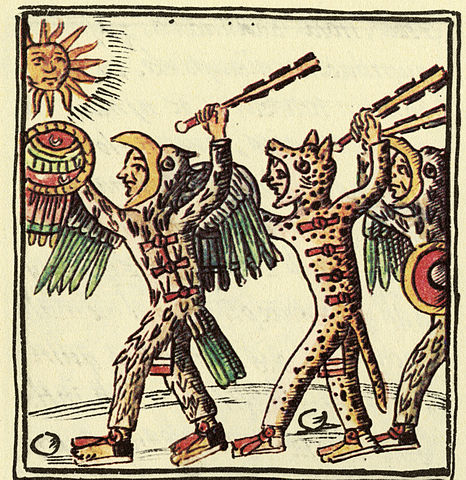 It's difficult to put obsidian on a progression with metal swords. Metal swords have a clear progression from duller, heavier, softer, and brittle to sharper, lighter, harder, and more flexible. But they also progress from relatively simple to forge (bronze and iron) to highly complicated (good steel) with good steel swords requiring a large and broad mining and steel industry.

In contrast, obsidian swords are fairly easy to make and don't require an industrial base. Obsidian and flint naturally flake into sharp edges. The process, called knapping, predates history. If you have the stone you can make the swords. It can do some horrible damage...

They have swords of this kind — of wood made like a two-handed sword, but with the hilt not so long; about three fingers in breadth. The edges are grooved, and in the grooves they insert stone knives, that cut like a Toledo blade. I saw one day an Indian fighting with a mounted man, and the Indian gave the horse of his antagonist such a blow in the breast that he opened it to the entrails, and it fell dead on the spot. And the same day I saw another Indian give another horse a blow in the neck, that stretched it dead at his feet.

But a Macuahuitl was quite heavy compared to a steel sword, and it did not lend itself to thrusting. It had to be swung like a club. It would require loose formations so each warrior had room to swing their weapon, in contrast to tight Eurasian formations like the phalanx which preferred a short, thrusting sword like a Gladius. Because of this lack of piercing ability, it would have great difficulty penetrating even a good mail shirt.

Rather than a progression, stone vs metal swords is more about the availability (or lack) of the materials, and the fighting techniques used by your warriors.

And a wooden sword is just a club.

3
Asteroid Impact Details = Impact winter? how long & how severe?
22
What would iron-age tools and weapons be like if they were redesigned with modern metallurgy?
20
Can an earth-like world lack mineable iron?
75
Is it possible to create a practical sword that's naturally toxic?
11
How durable are silver inlays on a blade?
1
Is there a scientific way to make a metal that can pass through other metals?
15
Metal or alloy for special sword
4
Making Dual Wielding Possible-And Effective