I'm designing a mission to a planet orbiting 61 Virginis (27.9 ly distant), and want to stay within physics that we're aware of (e.g. no warp drive). I've asked questions here and here, and the answers to those tell me that it's a tall order. For one, getting up to a reasonable fraction of the speed of light in a reasonable period of time seems to require accelerations that would be unreasonable to the human body.

So, my question: if I'm going to have my passengers in cold storage of some sort, but not so cold that they've gone solid (no "carbonite", but deep sleep and slowed biology), what sort of acceleration can I use?

I'd like the trip to be in as short an amount of time as possible for story continuity, so multi-thousand year transit won't work. Ideally they'd get there in less than sixty or so years, but a couple hundred years would be OK. Is it feasible?

If we cut the acceleration in half, to the much safer $g$ we feel on Earth, this brings the proper time to about 6.65 years - again, well within your time frame.

John Rennie added a couple graphs into his answer, so I feel compelled to do the same. Here is the graph of $\tau(x)$, assuming an $x_1$ of about 13.95 light-years and a total travel distance of 27.9 light-years: 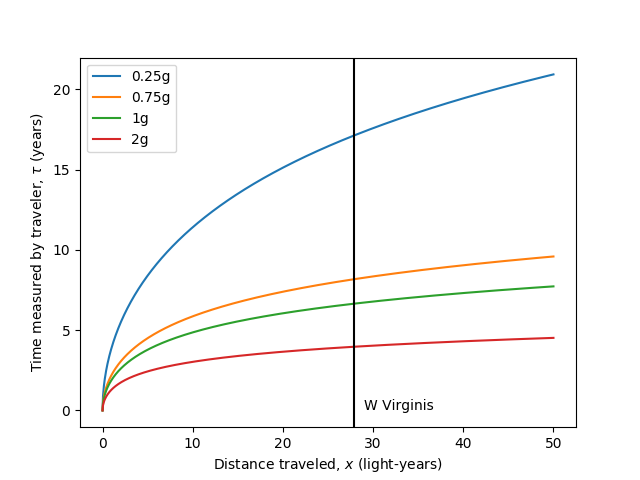 Unless you are planning to shoot the passengers out of a railgun, then there really isn't an issue at all.

Without getting into a lot of heavy duty math, accelerating at a constant 1*g* for a year will bring you to a very high fraction of c (in fact you will have traveled half a light year and be moving at just under the speed of light). Then you can coast towards your target and at the appropriate time start to decelerate.

Marshal Savage, in his book "The Millenial Project" suggested that in the far future instead of starships, there would be mass drivers that span the length of the solar system and accelerate pods to high fractions of c, and corresponding mass drivers at the target star systems to capture and decelerate the pods. In his conception, the launch tube is 3000 AU in length, and the pod inside travels at 10 g for a month to reach 99.99 c. Obviously that is far beyond what a normal human could withstand (trained fighter pilots in g suits handle accelerations of up to 9 g for short periods of time), but if the person is suspended in some sort of fluid filled capsule and all their internal spaces are filled with an oxygenated fluid then they will be far less affected.

So these probably represent the two extreme ends of the spectrum for travel at near luminal velocities. Naturally, moving at this speed requires massive amounts of energy to accelerate or decelerate (Robert L Forward's laser driven light sail needs 70,000TW of laser energy to accelerate to a modest .5*c*), and you would also need some pretty impressive shielding to protect the cargo and crew from impacts with even molecules of interstellar gas.

Not the answer you're looking for? Browse other questions tagged biology humans physics .

24
How would the human body develop under a different gravity?
5
What would be the short-term and long-term effects of an increase in the strength of gravity on humans?
14
How would I design a human body for zero gravity?
2
61 Virginis Mission Design: Solar System-sized Rail Gun for Ship Acceleration?
13
Redesigning the human body to flourish on a high-gravity world?
4
The 3% long term consequences
3
Effect of sustained high G enviroments on the human body?
14
How fast would a Martian space elevator travel?
5
Options for biological high-density energy storage within the human body