What are some examples of magic equivalent of a nuke [closed]

What are some examples from mythology or literature of a magical (weapon, object, or spell) that is the equivalent of a nuclear weapon?

Guaranteed to turn your a Tokyo into a parking lot.

Do be careful that you don't get his lawyers tagging along.

In the Inheritance Cycle (Eragon) by Christopher Paolini. Two events are described with the same properties of a nuclear explosion.

The use of the Suicide Spell near the end of the books, is described as:

The whole of the caster's body was then converted to explosive energy, utterly leveling the area around it and later poisoning the area.

And the Fall of Vroengard which is implied to have been caused by the same spell is described as if it were a fallout area.

In Terry Goodkind's Sword of Truth series a Light Web could be destroyed/triggered that could cause devastation. One that was constructed 1000s of years ago was able to kill 500'000 soldiers of the Imperial Order by Zedd.

Another related example is Unweaving a gateway in the Wheel of Time series, this caused an explosion, but not on the same level as a nuke.

They are the ones that immediately come to mind, however there must be quite a few out there!

If we allow tabletop games, there is always the Locate City Bomb (I can't find a way to link directly to the post in Reddit, but it's the first post) from D&D 3.5. I've included the process below, but the basic idea is that a harmless spell used to locate the nearest city (which of course has a very large range, in order to locate cities) is modified to instead fling every person in the radius of the spell to the edge of the radius and just about instantly turn them into paste.

Start with Locate City (Races of Destiny). 10 Mile/level radius 1st level spell. Does what it says on the tin. Add the following feats:

Snowcasting (Frostburn): Adding a handful of snow to our spell's components gives it the [Cold] descriptor.

Born of Three Thunders (Complete Arcane): Our (now) [Electricity] spell's damage is now half electric and half sonic. More importantly, it now stuns and knocks prone on a failed Fort and Ref save respectively. We like the Reflex save, because...

Explosive Spell (Complete Arcane): Now that it has a reflex save, our spell now shunts all creatures in spell area to the outside of the area of effect, dealing 1d6 points of damage for every ten feet moved.

In Greek mythology, Zeus is capable of striking the enemies with giant meteorites, inflicting a devastating damage.

In the Harry Dresden novels, Harry uses spells such as arietius or assantius to release stored kinetic energy. If your magi were able to pipe some of the kinetic energy from the various towns and cities near them, you could have a massive blast of kinetic energy all released at one focal point. In addition, the friction of all the kinetic energy expanding from the point would generate a lot of friction, which would give you your "Light of a Thousand Suns" and immolation of targets near ground zero.

Surely telling your opponents that you have a magical bomb of concentrated energy from your entire country aimed at their capitol would make them think twice.

In Neon Genesis Evangelion the Second and Third "Impact" events are cataclysms caused by the union of human and "angelic" beings.

The Second Impact resulted in an explosion with the equivalent power of 18 billion megatons of TNT. Two billion people died immediately from tsunamis, while subsequent wars brought the total death toll to half of the earth's population.

In Rebuild of Evangelion 2.0 (a remake of sorts) a "Near-Third Impact" event occurs. This is extremely destructive, defying gravity, and tearing the natural and built environment apart physically. This event is cancelled through the Spear of Longinus before it can result in further destruction. 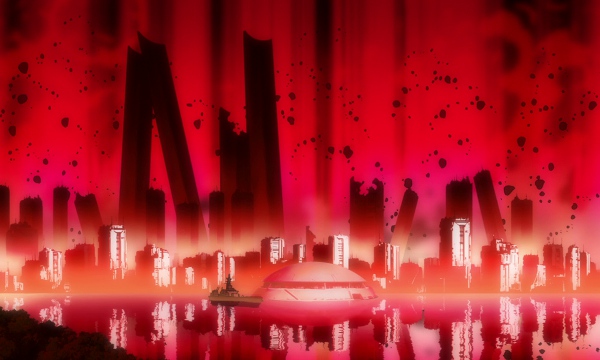 In the original conclusion to the saga, the End of Evangelion movie, a full Third Impact occurs. In addition to physical destruction, the barriers between human bodies and their souls are broken down, as well as the barriers between all humans, resulting in a union of all of humanity.

These impact events were all caused by human initiative. One faction, Seele, desired to cause these events so that humanity would be united as one soul in one god-like angelic body, a scheme called Instrumentality. An opposing faction led by Gendo Ikari opposed Seele, but he still desired the union of the human and the angelic, as he believed it would allow him to be reunited to his wife. It is not exactly clear what his plan is, but fans theorise that he intended to allow the Third Impact to occur as well as Instrumentality under the belief that he would then be able to reverse it. If the Angels had initiated the Impact event then it would have resulted in the complete destruction of humanity.

These factions were prepared to initiate the Third Impact earlier than they original planned in order to have control over it, and to prevent the others from doing so, so I think these Impact events can be considered deterrents of a sort.

Not the answer you're looking for? Browse other questions tagged technology magic warfare weapons nuclear-weapons or ask your own question.

5
How could a channeling spell be useful during battle?
17
How does a modern military defend against a guerrilla Army of wizards
5
Can ice be used as a practical weapon in late medieval times?
13
Plausible reasons for use of combat drones instead of missiles (kamikaze drones) in space combat?
13
How to realistically implement magic-users in medieval warfare?
22
Weaponising the Grasp-at-a-Distance spell
9
Figuring out the math for the Sphere of Meteoric Conversion