What are the evolutionary factors that could create a species that looks like E.T.?

Watching E.T. I was wondering what evolutionary factors could cause a species to have the appearance of E.T., like the environment he would likely live in and the gravity of his homeworld. 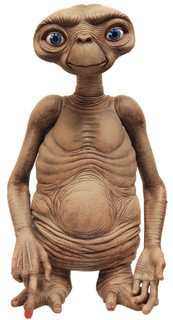 Assuming that E.T. is an evolved being and not a poorly bioengineered survey drone or just the cutesy anthropomorphic invention of Hollywood filmmakers that it actually is...

Given E.T.'s feet and legs, it is apparent that this is a ground-dwelling non-cursorial being. Given that in the movie, E.T. does not display any superhuman strength or subhuman weakness, we can assume that its home world has gravity similar to our own. The fact that E.T. and its technologically advanced crewmates appear to be voluntarily exposing themselves to our atmosphere indicates that there are atmospheric similarities between Earth and E.T.'s world, most probably having a similar pressure and composition. There are most likely differences in the partial pressures of the various gases, but falling within the acceptable range for at least limited unprotected exposure for E.T.'s species. There exists the possibility that given that this species appears to go about naked, that it has some sort of internal technological breathing apparatus.

Given E.T.'s short legs (especially when compared to the very long arms), we can assume that this is not an arborial species (since the toes are not long enough to be opposable given the size of the foot pad), and that it has no predators that need to be outrun, nor prey that needs to be pursued. Since its fingers are of unequal lengths, it is unlikely that it does much in the way of brachiation, again making it non-arborial.

Given that it has binocular vision, this, combined with its small mouth and long arms, indicates that it most likely eats small items of soft food that occur mixed with non-food items, for which visual discrimination is important, and can be readily picked by hand. This food may be sessile, or if motile, must be fairly small, like insects, capable of rapid acceleration but not high speeds over any long distance, hence the long arms that could grab a fleeing bug of some sort without requiring the whole creature to move much. Given the short legs, this food is likely available within reach, not significantly above head level (which is variable, given the extensible spinal-column analogue).

The small mouth is suggestive that its food is not other large animals or plants that require significant effort to break up to an ingestible size. Given that we don't see dentition implies that this species has no enemies which might be deterred by a display of dentition. Otherwise, we cannot draw any conclusions about its dentition other than that no great number of teeth seem required to process its food, ruling out tough or fibrous foods that might require a lot of mastication to fit down the narrow neck.

The luminescence displayed by these beings in their upper torsos and in their longest digit may be evolved, but in an advanced social and technological species (assuming that they built their own starships) which has demonstrated a facility with vocal communication, is more likely to be a side-effect of some technological devices that facilitate communication and environmental manipulation. Since it is unlikely that telekinesis could evolve where there are more efficient biological alternatives, the in-movie demonstration of telekinesis is most likely the result of some unobvious technological enhancement.

While we can tell from this creature's body-plan that it has no enemies to outrun nor prey to pursue now, this does not exclude this from its species past. That its legs appear unaccountably elephantine, in contrast to its slender arms and neck, suggests that its species may in the past have had longer legs, and that they have evolved to be shorter, and that the folds of skin may have occurred as a result of a mismatch in the rate of evolution between bone length and skin tautness.

That a species may have evolved to have shorter legs is suggestive that in its evolutionary past it did have a need for greater speed, but the species has long outlived such a need. The greatest probability is that this species has both eliminated potential predators from its environment, and has been producing constructed dwellings for a long period of time, leading to both a lack of advantage in long legs, and an advantage in short legs. This suggests a civilisation that may have lasted tens to hundreds of thousands of generations.

The evolution of the extensible neck indicates that this species has not been particularly speedy for a very long portion of its evolutionary history, yet had a need to look at things on different levels fairly closely. This suggests a somewhat sloth-like metabolism, potentially as a response to low-nutritional-value food, which would tend to select for energy-saving traits.

In the movies it is demonstrated that these are social beings, and it is generally accepted that sociability is a prerequisite for a technological society, such as one capable of building a starship. Given that one individual (who we should not presume is in any way greatly out of the ordinary for its species) is capable of audible communication, including with another species, it should be assumed that its primary form of communication was evolved to be audible, and that any 'telepathic' communication is a later technological add-on that has since superseded the audible communication channel.

Also, given that these beings are slow and presumably patient and methodical and that given their physiology their society appears to have existed for a very long time, it can be reasoned that they have dealt with the issues of high energy consumption and the environmental degradation that a high-tech society tends to produce. This may of course have led to a global-city-world, with no non-domesticated species remaining outside preserves, if any still exist, hence their apparent interest in the natural environment of a presumably less-degraded world at the borders of a populated area.

As awkward and clumsy as they might appear to be planetside, ET's body structure seems very well-adapted to a spacefaring species. I would therefore like to suggest that his species (or sub-species) may have begun more humanoid, but has spent long enough travelling between planets that their body structure has become adapted to spending long periods in space, either through natural evolution (due to crossbreeding of individuals who tended to spend long periods on space stations) or artificial breeding programs.

Watch some videos of astronauts navigating our own space stations in zero-g. They mainly use their arms to grasp projections from the walls in order to maneuver, with their legs getting less use. Since spacecraft weight is expensive, hallways tend to be cramped and narrow; it is therefore beneficial for an astronaut species to have as compact a shape as possible. A humanoid optimized for life on such spacecraft may therefore have short legs and long arms/fingers (which may also be useful for operating control panels). Large eyes are useful for seeing in low-light conditions, which could help save precious energy on lighting. The extendable neck is a fairly complex adaptation and might have already been a feature of the species, although it would also find use in viewing multiple control displays while expending less energy; furthermore, the main problem with a long neck (strain on the heart) is less of an issue in zero-g.

ET's "telekinesis" is probably artificial and may be an implanted device for generating localized directed gravity fields, which would also be very useful for aiding maneuvering in spacecrafts. Since he saves it for an emergency, it probably requires a lot of energy to operate, especially when using it to counteract a planet's gravity.

We never see the inside of ET's ship, but my guess is that it is probably more like the ISS than the Enterprise - narrow hallways, lots of handholds, and no ship-wide artificial gravity. Instead of spending huge amounts of effort and energy to make the ship seem like their home, his species probably found it more efficient to change the astronauts.

14
What evolutionary factors can contribute to large sexual dimorphism in large mammals?
3
What factors would allow the species I designed evolve successfuly?
2
How could a shapeshifting species look zoomorphic and human at the same time?
7
What natural factors could possibly push a species of eusocial insects to become intelligent?
2
What would be evolutionary reasons for a humanoid species to develop multiple arms?
2
Can my mermaids work?
13
What evolutionary pressures could lead to tree dwelling octopuses?
1
What Environmental Factors Would Lead To The Evolution Of A Large, Warrior Homonid Race?