Can a robot track someone by their DNA?

In the distant future, a multinational corporation has become more powerful than any government. To deal with individual enemies of the corporation, the company created the enforcer line which specializes in robot->human combat.

The enforcers pack a variety of weapons and gadgets but the most terrifying of all is the DNA-EYE. As people live, breath, move, and interact with their environment they release skin cells, hair, and other cells. The DNA-EYE is acutely aware of human cells and will use X-ray scattering to identify the gene sequence of the human who left the cells behind. Thus it can connect the cells to the person who left them as a unique identifier. The cells left behind last in the environment for some time and so the DNA-EYE gives the enforcers the ability to track targets for long periods before eventually catching them and dealing with them. It only needs a single cell for identification.

Would this be a viable method of tracking? Do we release enough skin cells often enough that the robot can simply follow the DNA trails?

How long does the DNA remain viable after it has separated from the human body? Does it depend on what type of cells the DNA is in?

What might someone do to prevent being tracked this way? Would covering yourself from head to heel in cloths be enough to cover your tracks? I think an astronaut suit would probably suffice to hold in your DNA, but what else could be done? If you use one of those showering stones to remove dead skin would that stop the shedding?

X-ray scattering likely wouldn't be the best way to do this. X-ray crystallography hasn't been used for DNA since Rosalind Franklin used it to further the identification of the structure of DNA.

What I would consider a more plausible scenario would be what this guy does on a daily basis: 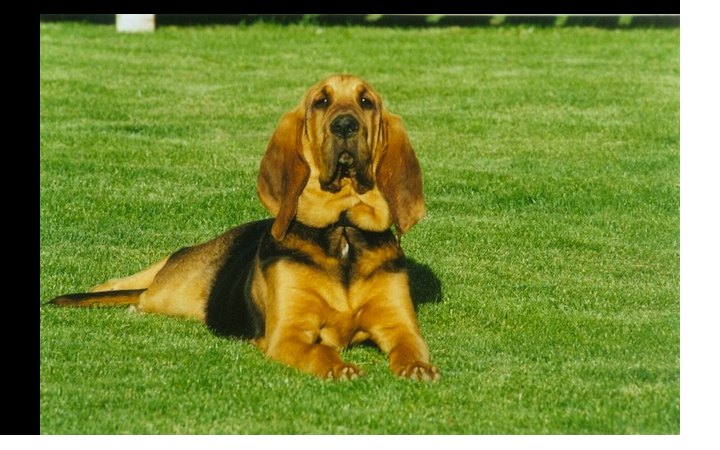 Bloodhounds are incredible at tracking down people due to their finely tuned sense of smell. They are routinely used in tracking criminals and intruders. In fact, we're currently working hard to develop machines that are as sophisticated as a dog's nose, and probably more so, if we can manage it.

Because a human's (any animal's) body odor is largely caused by apocrine sweat glands, and sweat glands are a biological organ based in DNA, body odor can be extrapolated to be derived largely from DNA. (I don't presume to know how, and I can't find anyone who has done that particular bit of research.)

If we make this one assumption, then we could theorize that a person's body odor could be artificially determined to within a reasonable degree using near-future technology and his/her DNA profile to allow a machine to identify and track the odor.

From there, it's a pretty simple task to track down a person. Bonus is, it's nearly impossible to defeat this method of tracking, as the Mythbusters found out time and again.

Alternatively, provided some advancements in technology, your machines could use some form of real-time DNA analysis, kind of like what Biomeme, Inc. is working on for your smartphone right now.

We release enough skin cells to easily be tracked. However, your method of identification will run into the opposite problem: it will be overwhelmed.

You can't rely much on "fast" methods like X-ray crystallography. 99.5% of the human genome is shared by every human. This means that 99.5% of the signal you are looking for will be everywhere, and only 0.5% will actually be useful fingerprinting content. It gets even worse when you look at the kind of DNA we can test. For fingerprinting purposes, we are 99.9% identical! Also, that 0.5% is decidedly not unique. It's a mismash of alleles that are quite shared. What is unique is your exact mismash. If you grabbbed a dozen people and tried to sequence all of them in one big puddle, you'd find that they have most, if not all of the DNA markers you have. The unique part is that you have all of them. This means pretty much your only solution is to actually sequence the DNA on the spot. This is time consuming. There's literally thousands of false trails, each of which takes time to process.

The solution may be to have a distributed approach. Instead of having one enforcer that does everything, have an enforcer with a swarm of nanobots, each of which is capable of gene sequencing. The nanobots follow the swirling trails and report back the most promising leads.

The only problem with this premise is that distant futuristic technology cannot be reliably predicted. We can expect with high hopes that dna sequencing techniques would not only become cheaper with time, but the process would also consume lesser time. So theoretically it should be possible in the distant future.

One thing you can expect more reliably to occur in the distant future is that it would become easier and easier to scratch some cells from a living creature's (including humans) body without being noticed by the person's sensory system. For a start, chemicals present in blue ringed octopus are estimated to be 100 times more powerful than morphine in their pain killer properties. This is one of the reasons why a blue ringed octopus bite is rarely noticed by the victim.

The point is that if your robots combine cyborg insect drones laced with blue-ringed octopus' pain killers, they can easily obtain genetic material directly from their targets, and nobody the wiser.

Note that the method mentioned in this answer is theoretical based on what we know today and what would probably be achieved in the coming decade or so.

It may be possible to evade being genetically traced this way by covering oneself from head to toe, but would it really be worth it? Would it be a practical solution? Probably not.

If the target uses a washroom, your cyborg bots can get in the utility and obtain some fecal matter which contains cells from the person's intestines and skin. Also, as mentioned above, the cyborgs can always bite the target without being noticed and obtain genetic material directly.

One possible solution could be to use minimum range electromagnetic pulse weapons to neutralize the cyborg insects and possibly also jam the main robot (dna-eye).

Possibly yes, but not the way you describe it.

The human genome has about three billion base pairs. DNA identification techniques do not compare all of them, they just look for specific sections of DNA and declare a sufficiently probable match if they do match. X-Ray scattering doesn't sound like a good way to get this data.

Assume that lab on a chip technology becomes advanced enough to do a DNA match and equip your robots with those. The robot would use this to confirm a match that had been made with other, less precise sensors like optical recognition.

Just imagine. A DNA-EYE moves close to a human, swipes a sample, and says "sorry ma'am, you look like someone I'm looking for."

To answer your specific questions, yes humans are constantly shedding DNA which could in theory be tracked like a scent. Once the DNA has been shed it will last quite a long time. DNA is very stable molecule and is only rapidly degraded in the presence of specific enzymes. Outside I imagine the majority of DNA will still be informative even days or weeks after it is left. It really just depends on whether some other living thing comes along and degrades it.

With regards to your technology as a whole, instead of using X-ray scattering I would recommend a technology that will hopefully soon be available, the nanopore. A robot with millions of these DNA reading nanopores could potentially develop a real time sense of what organisms were around it and either by coordinating between multiple sensors in different places or by moving itself around it could get a sense of direction of a specific individual.

I think the main problem with the technology, and this goes for the x-ray scattering, the nanopore, or any other sequencing technology, is just how much other DNA is out there. Every living organism including animals, plants, bacteria, and even some viruses has DNA. This means a random sample of the air, really anywhere other than a clean room, is going to have a lot of DNA in it. Your robot is going to have to sequence a lot of dust, pollen, bacteria, and viruses to actually get a thorough sampling of the DNA in its vicinity. Even if your fugitive was scratching themselves vigorously as they fled only a small fraction of the DNA your robot sequences will be human, let alone belonging to your target. So you need to be able to sequence DNA really, really fast.

"What might someone do to prevent being tracked this way?"

One method some science fiction stories https://en.wikipedia.org/wiki/For_the_Win have mentioned is instead of trying to avoid being tracked, avoid having your specific DNA from being identified in the first place. When committing a crime, don't worry about your cells littering the scene, but instead gather dust from the subway and sprinkle thousands of other people's DNA all over. "the robot tracker brought us 2000 suspects. Put them all in the lineup and see if any of them look like the perp".

8
Making people accept their new robot overlord
10
Deposing the new Robot Overlord
6
Best way for a robot to drink?
27
Why would an AI overlord want to give their robot citizens emotion?
0
What material could be used to replicate body fat in an advanced android/ humanoid robot?
29
Could someone be convinced they are a robot?
4
Why would combat robots with DNA-based biocomputers tend to go berserk?