Let's say it can move forward. Let's say it could potentially move backward, or at the very least slow down. Now it would be top if it could just steer left/right/up/down without gravity-assist.

How do I accomplish that?

I'm aware of RCS though I don't know if it applies to such an heavy warship. I've heard of gyroscopic wheels, though once again, I don't know much beyond basic principle.

Requirements: Attitude control should be able to rotate the ship in any of the 3 axes in place if the ship is not moving (i.e. when docking). If the ship is moving, there is no hard requirements on turning radius, I'd just like to be able to turn left before the end of the solar system is all.

Attitude control can also help propulsion in translation, though it isn't obligatory.

How are you making it move forward? You mean accelerate, as movement is relative. You steer by directing the thrust. No kind of rudder will work in a vacuum. You ought to look at information on real spaceships.

Whatever you are doing to make the ship go, you do that off-center to apply torque as well. Normally we are talking about rockets of some kind.

Your sci-fi ship will need some enormous power source to make it accelerate. So it will easily have enough power to feed little steering thrusters studding the ends. If you have a made-up drive mechanism, use a litte bit of the same thing to turn.

You may have trouble with the particular design; e.g. if the main drive is a high-tech fusion reactor, but it's not practical to make tiny ones studding the exterior for turning in place, and might not be able to vector the thrust of the main drive. Yet, such a heavy ship would have trouble using "simple" chemical rockets or compressed air for the purpose. Perhaps the main drive, when in operation, is used to store energy somehow, and use that to accelerate reaction mass (which still becomes a consumable to ration). You might use water for reaction mass, and produce hydrogen and oxygen from main drive power, using that as rocket fuel when maneuvering thrusters are needed.

As with modern satellites, using a flywheel saves on consumable reaction mass. But it might have to be highly advanced to handle the amount of angular momentum necessary. Perhaps parts of the ship's mass that are used for necessary purposes (bulk stores, for example) might move relative to the rest of the ship.

If you are asking how to control the orientation of a massive object in space, you have two choices:

Real spacecraft that need to carefully control their orientation, like communication satellites and observation instruments, use both: the wheels have the advantage of full-time careful control without using up anything. But if corrections tend to be in one direction they eventually get "full" and rockets are used to perform the "momentum dump" of the reaction wheels.

It is also possible to use outside forces to your advantage. Spacecraft have used solar light pressure to stabilize an orientation and kill unwanted rotation. For a huge ship, sunlight would have little effect unless it was using something like a solar sail.

To turn is to accelerate, but it's rotational acceleration not linear.

As I'm sure you're aware, momentum is conserved. Angular momentum is also conserved, this is what you're dealing with when you turn in space. Your manoeuvring thrusters must not only be able to start the turning motion but also to stop it.

Your thrusters will need to be matched 4s. Symmetrically placed around the centre of mass. 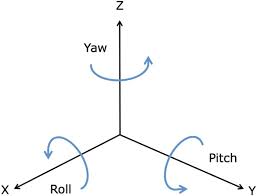 They should be applied in pairs, one forward one aft for pitch and yaw or one top one bottom for roll, to turn about the centre of mass. However if you pair them same side you could "sidestep".

To ensure there's no ambiguity here.

Ship Velocity Vector can be changed without thrusting

But it still requires a momentum exchange with something.

A maneuver typical of this operation is called a gravity assist. The net result of a gravity assist changes the velocity of the ship relative to a third object (e.g. the Sun) but not the body performing the assist (e.g. Jupiter).

What exactly are you asking?

From your question and the comments, I think you want to know how to change spacecraft orientation (not velocity or acceleration vectors), without firing your engines.

If this is your question, then the answer is there are many methods of changing spacecraft orientation without (directly) affecting the spacecraft velocity and acceleration vectors.

This is complicated by the fact that every spacecraft ever designed has its main engine thrusting through the center of gravity.

So if you change a ships orientation while it is thrusting, you will change both its acceleration and velocity vectors.

There is no "turning radius" for spacecraft

Or more precisely the turning radius depends upon your current velocity and your thrust capabilities.

Forget 99.999% of everything you've ever seen about how objects move in space. Anything you've seen in movies or TV are wrong (and this includes supposedly accurate movies like Gravity - don't get me started).

Application of a thrust: 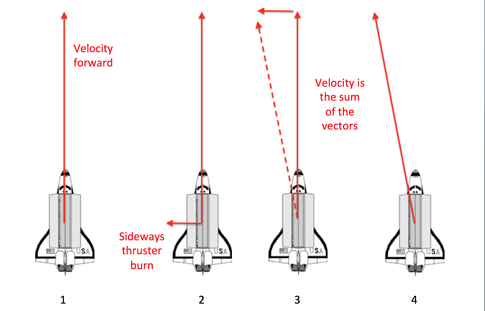 Other than the fact that usually the application of thrust is in the direction the craft is oriented, space craft velocity has nothing to do with spacecraft orientation.

Since you're already aware of RCS, let's look at CMG (control moment gyros).

A CMG can apply the large amounts of torque required to change the orientation of your ship. It also doesn't use much power to do it. However, CMGs have a draw back:

At least three single-axis CMGs are necessary for control of spacecraft attitude. However, no matter how many CMGs a spacecraft uses, gimbal motion can lead to relative orientations that produce no usable output torque along certain directions.

Meaning there are some orientation changes you can not do using only CMGs. To get around this limitation, a CMG attitude control system must use something like RCS.

Will impart rotation upon the spacecraft. By simply changing engine orientation you can cancel this rotation at any time you desire. The draw back is this is only available when firing your main engine. It will also change your velocity vector.

I think that to change the direction which your ship is facing to, you would need a massive RCS system. And lots of time, of course; unless you want to risk extreme G-Forces, rotating the ship backwards could probably even take days.

If you have some sort of G-Force dampers like the Starfleet uses, rotating the ship should be easier.

It depends on your main engine technology, since a good option is to use the same engine you use to go forward. You have the additional problem that in space rotating the ship is only half of the problem.

So if you use a thruster as main engine (think Galactica) you use RCS. If you use a field like Star Trek, you manipulate the field in some way to change direction.

4
A weapon of maximum fluidity
56
How do I defend an island nation from attackers with 15th century technology?
18
movement of space animals
8
Fusion thrusters on a planet. Problems with temperature and radiation!
62
Why would technology dictate graphical interfaces to be rare on spaceships?
7
Remotely controlled battle starships
7
Realistic hovering mechanism for my sci-fi drone
58
How do spaceships determine each other's mass in space?
18
Would near-lightspeed spaceships have an aerodynamic shape?