Is it a reasonable idea that malnutrition can cause insect or other similar types of aliens to lose limbs?

In the creature type I asked about in my last question, there are some lower caste members who seem to have metal limbs. However I don't think they would waste resources to build the legs for lower-caste-members.

I do know that it's considered a privilege if they do the work, but I know for a fact they have trouble getting food and are not as healthy. So the question is, is it reasonable that they could have lost their limbs due to malnutrition?

There are conditions where malnutrition can be directly connected to neurophaties. For example:

The list would be extremely long, whole books are written about it. To make it simple in your case the "loss" of a limb can be not that the limb falls off but that there is an impossibility or difficulty to use it due to nervous system damage.

Obviously this would be derived from humans, I don't think there is real research on insect malnutrition, which can be a good thing because it gives you a lot of room to move.

You can resolve the economic problem of "if you have the money for a mechanical limb then why not just buy better food" with the mechanical limbs being built with items discarded by the rich, being outdated limb models or even that some particular food necessary for good health in the species is so scarce that its price is actually higher than a mechanical limb.

If this element was available to everybody in the past it can be that due to an actual decline in its quantity overtime but, as it happens, could also be that the quantity of it stayed the same while the population increased dramatically so the price skyrocketed as demand increased.

You can also build your society in a way where the poor conditions of these "people" force them into jobs for what mechanical limbs become necessary/ advantageous and are actually fitted on them by the company/ corporation/ government. In this case you could add poverty onto poverty by keeping their salary low because the organization doesn't give them property of the mechanical limb and they "rent" it through a deduction in their already low pay.

The mechanical limbs could even be taken back by the organization when the individual cant work anymore or dies and re-fitted on a younger worker that was just hired.

If the cost to make a metal limb is lower than the cost of food then your society has some issues, but putting that aside:

Many insects are willing to and capable of tearing off limbs to escape predators. Spiders, some flies, and even beetles would rather lose a leg and live to fight another day than be caught by a limb and fed to a hungry chick.

So your starving lower castes? It makes perfect sense for them to tear off their own limbs in order to eke out a few more days of life. Not only do they no longer have to supply that limb with nutrients they also get a tasty tasty calorific package, and if the technology exists to replace the limb then why not use it?

Prionic disease is an issue if others are feeding off their limbs (say they sold a leg to a soup kitchen in order to pay the rent that month), but in the cases of autophagy (eating themselves) it's not too much of a problem. This also depends a lot on your creature's reaction to trauma: If losing a limb is likely to make them die of shock or bleed out then this is obviously not a viable survival strategy.

Obviously, if these starving and desperate souls survive the circumstances that drove them to eat themselves, then they might be able to scratch together enough resources to replace their missing limb. Or maybe some kind soul just gave them mechanised limbs and a gun and sent them off to pillage alien colonies.

Self-cannibalism or autophagy normally isn't a very efficient way to feed yourself. If it's attached to you then it's easier for your body to re-absorb most of the energy leaving a dry husk.

There is another option from the real world. 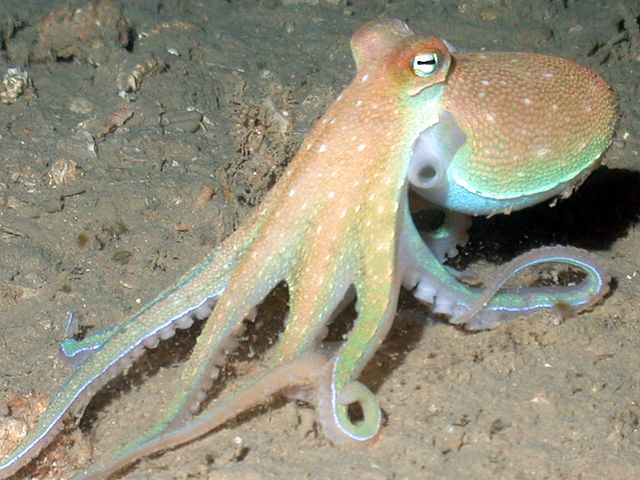 The best guess, today, is that this behavior is the result of some kind of infection — although people don't know what the infection is. The disease probably attacks the nervous system, causes the octopus to eat itself in a thoroughly horrible way, and then kills the octopus off.

There are even real (and horrifying) human diseases/conditions which can cause humans to chew off their own fingers and lips. I'm not including a picture for that one, google "lesch nyhan syndrome".

So an option is that poor/sickly members of your society are more likely to succumb to a disease which sometimes causes them to chew off their own limbs.

It's certainly possible in theory. In a way it's what mammals already do, in times of plenty we build up fat reserves and then when food is scarce we burn those fat reserves, essentially digesting ourselves, to stay alive.

If the insect species were capable of regrowing lost limbs then it may have a similar function where in times of famine they consume their own limbs (or feed them to their family) and do not regrow them until food is plentiful again.

Most likely they would "digest" most of the leg from the inside out first reclaiming as much valuable nutrition as they can, then finally the leg would fall off by itself and then be eaten to reclaim as much as possible of the bits that could not be digested from the inside.

An alternative explanation could be that this species by nature does not have these limbs at all. Much like the Daleks, they latched on to the idea of prosthetics; for the lower castes this means the (relatively crude) metallic version, while the upper castes can afford the more refined, bio-engineered limbs.

If the specialist limbs are heavily fortified with materials that are otherwise useful to fulfilling the creatures dietary requirements, then I can easily see a malnourished creature consuming the specialty limbs.

Similarly, if possessing the limbs required burning more metabolic resources than otherwise, then shedding the limbs in a time of shortage could be possible.

These are especially true if the limbs can be regrown when food is plentiful again.

Not the answer you're looking for? Browse other questions tagged aliens food xenobiology or ask your own question.

3
Can an insectoid race have a flexible exoskeleton?

6
Endothermic or ectothermic? Alien biology
10
Alien Griffin Design
6
Help me Explain this Alien's Traits
10
What is the most efficient and safest way to communicate with an alien should first contact occur?
9
Would a fat humanoid last longer in a famine?
1
Could a humanoid alien have a tail?
7
What would be the usefulness of both arms and fins on a sea dwelling, amphibious organism?
10
What metals other than calcium can be used to create alien bones that won't also engender a human-toxic environment?
7
Anthropomorphic flying squirrel, gliding capability
5
Humanoid Bioweapon: what can stay and what has to go?