Would there be a possibility to live if the world stopped spinning? [duplicate]

I'm working on a short story that needs the dramatic background of a world that stopped spinning, where the inhabitants of one side of the world live in eternal day, an the other side, obviously, in eternal night.

I'm trying to make it as real as possible. I've made my research and found out the devastating effects that it would have if the earth stopped spinning all of a sudden so, my question is, which way, if there's any, is the most scientifically correct to narrate a story where the earth stops spinning but the inhabitants, or at least some of them (My story focuses specifically in one city, I need their inhabitants alive), are still alive?

I am assuming that the atmosphere retains its velocity here.

At the equator, the surface of the Earth moves at around 470 meters per second, so this would correlate to the kinds of winds you would see once the Earth stopped spinning (if it did so immediately). Nearly everyone on the surface would die due to the amount of debris flying at a little over a thousand miles per hour. The wind would be highest at the equator, obviously, but everyone between 42 degrees north and 42 degrees south, about 85% of the world's population, would experience these kinds of winds.

If your characters were in a subway or some other subterranean tunnel when it happened, they might be fine. For example, there is a network of tunnels in the bedrock below Helsinki, Finland that includes a shopping mall, hockey rink, swimming complex, and even more.

That would most likely be the best place to be when it hit. No building on the surface would survive, except maybe at the South Pole; not for long though.

The kinetic energy of this supersonic wind would quickly heat up the air once it was over, and in areas where the air is moist, there would be huge thunderstorms the like of which we haven't seen before. The equator would pretty much be uninhabitable at this point, even if you were a hundred feet underground.

The temperature would be thrown off by this extreme heat, the cold water below the oceans' surface churning up a mix of wind, spray, fog, and of course, rapid temperature changes everywhere.

The low oxygen water would kill off many of the ocean animals, and any animal that needs to breathe, like dolphins and whales, would have a very hard time doing so in the sea spray.

The sun now rises and sets every once a year, so day and night respectively would be six months long for everyone.

The moon has not stopped spinning around the Earth, however, so months wouldn't change. You'd just have six months every day and every night.

Eventually, though this might not apply to your story, the Moon would accelerate our spin, and its gravity will slowly tug on our planet and get us back into action. It would no longer have tidal energy to supply it, and since right now, the Earth spins faster than the Moon, and our tides slow down our rotation while pushing it away from us, so that would be reversed, and we would finally start spinning again.

—Most of this I got from the book "What if? Serious Scientific Answers to Absurd Hypothetical Questions", which is an awesome book to get a good laugh out of while learning something interesting.—

I can't find it on his site, but here is a version that Google turns up. To summarize, 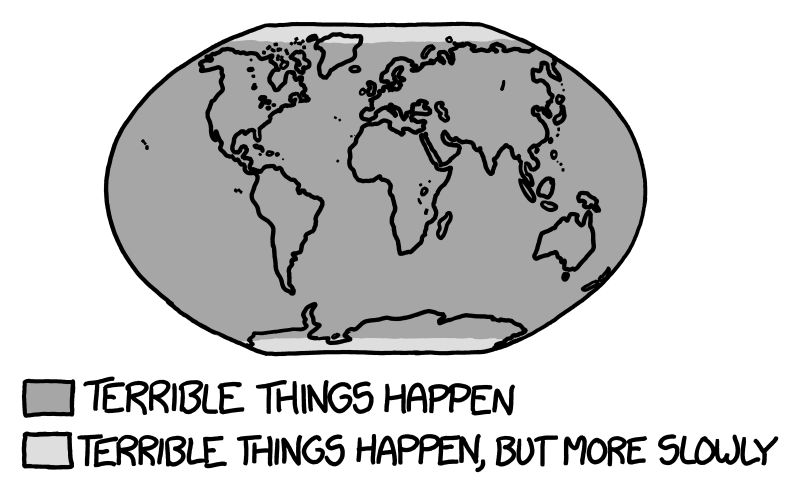 It depends on how fast the Earth stops spinning. Let's take the hard case: sudden stop. One second. Who can survive? Antarctic researchers.

Like a train stopping suddenly, everything on the surface, people, buildings, cars, geographical features... they all keep moving from west to east when the Earth suddenly stops moving under them. Their latitude determines how bad the shock will be. People near the equator will be torn off their feet at 1000 mph, while at 45 deg latitude it will be 735 mph. Near the poles at 85 deg latitude it's a more modest 90 mph. Needless to say, being flung even at 90 mph is a good way to die. And then everything else that got flung piles on top of you.

The atmosphere isn't connected to the Earth, so it keeps moving. Suddenly there are 90 to 1000 mph winds racing west to east. This is very bad for anyone on the ground, but it's the key to survival.

Your survivors will be in the air, moving with the atmosphere, and near the poles. Perhaps flying to or from Amundsen–Scott South Pole Station at 90°S. When the Earth stops it will appear to them as a sudden change in ground speed. If they're far enough south it may be no worse than a sudden change in wind speed and direction. Antarctic pilots are already used to flying in horrible weather conditions, and will likely be successful in landing.

People on the ground at Amundsen–Scott Station, right at the South Pole, will also likely survive, but be very shaken up.

Inhabitants of other Antarctic stations die, they're too far north. The next closest are at 80°S. They're flung at 180mph and subjected to hurricane force winds. Similarly, Arctic research stations are too far south. Aircraft in flight at very high latitudes may survive, but they'd be landing in the mother of all head-winds.

There you have it. A group of 50 to 200 scientists, pilots and personnel at the South Pole are the only people left alive on Earth. The ocean is rising towards them. The atmosphere is in turmoil (not to mention what must be happening within the Earth). They have limited supplies. What do they do? Sounds like a good story.

Not the answer you're looking for? Browse other questions tagged science-based planets physics earth fauna or ask your own question.

5
If the earth gradually stopped spinning, what would the changes look like in 20 years?

15
What could cause Earth to slowly fall out of orbit?
5
If the earth gradually stopped spinning, what would the changes look like in 20 years?
6
What astronomical considerations are necessary for the planet in this model to possibly be Earth-like?
110
What would make scientists realize they were on a flat world?
6
Possibility of a terrestrial moon orbiting a Jovian planet for the setting of a fantasy world
31
Would life on the edge of the Sagittarius Dwarf Spheroidal Galaxy see the whole Milky Way in the night sky?
9
Feasibility and consequences: the cosmic dance of twins habitable moons
4
How long would it take a matter-antimatter GeV gamma ray laser photon rocket to get to Ross128b (11 light years away)?