From chemistry courses of old, I know that a combustion reaction has the general form $C_xH_y + O_2 \longrightarrow CO_2 + H_2O$. So for this planet to be able to continually combust while sustaining atmosphere it must either produce or be supplied more reactants (hydrocarbons). This is where human society could possibly contribute to this scenario by producing gases such as carbon monoxide.

Additional research has yielded that a gas such as carbon monoxide has an auto-ignition temperature of 609 degrees Celsius. The only idea I had for the atmospheric temperature being raised this high temporarily is that the planet passes very close to its sun at a certain point in its orbit. I was hoping this would be a valid situation for creating temporary firestorms.

To summarize, what are feasible conditions to create atmospheric combustion, and what scientific holes can be poked in this hypothetical situation?

Let's get a few things clear first. The first being that an atmosphere which goes into flames by itself (as in, the fuel gas and oxygen are both present in large amounts in the atmosphere itself) would make the planet inhospitable for humans.

Why? Because atmosphere is a huge thing and you would need gases in huge amounts to send the whole atmosphere burning. Take for example, the case of methane combustion:

One mole of methane is 16 grams of it. And ... if you let methane gas collect in a house and then combust ... 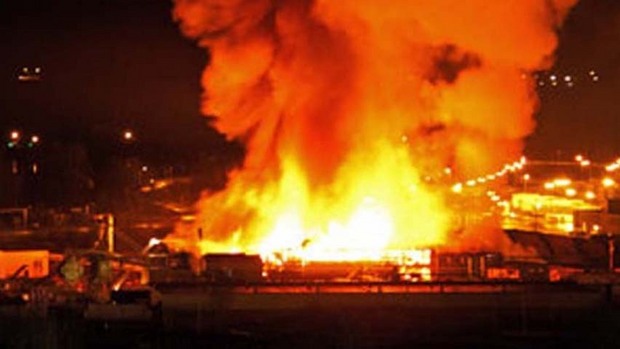 Now if you had methane in large enough amounts in the atmosphere to send the whole atmosphere burning ... hell is the first word that comes to mind. And forget Mercury, Venus ... that burning planet would be a horror to look at from a distance, let alone being hapless enough to be there.

One possibility for your required scenario could be that some portions of atmosphere go on burning while others stay unburnt. You could theoretically have such a scenario but it is practically impossible, thanks to winds. Although methane is much lighter than air (16 grams per mole versus ~29.5 grams per mole), it takes much time to rise above the atmosphere. Which means that if you have methane gas in such large amounts to make a layer in the upper regions of the atmosphere, it will go on a catastrophic explosion before reaching there (thanks to static electricity and lightning bolts).

You can have regional combustion reactions on a planet where a gas is naturally released into the atmosphere and in the lack of winds temporarily collects in a place before burning off in a huge explosion. We are talking about confined explosions here. Take for example the scenario at Door To Hell (Turkmenistan) 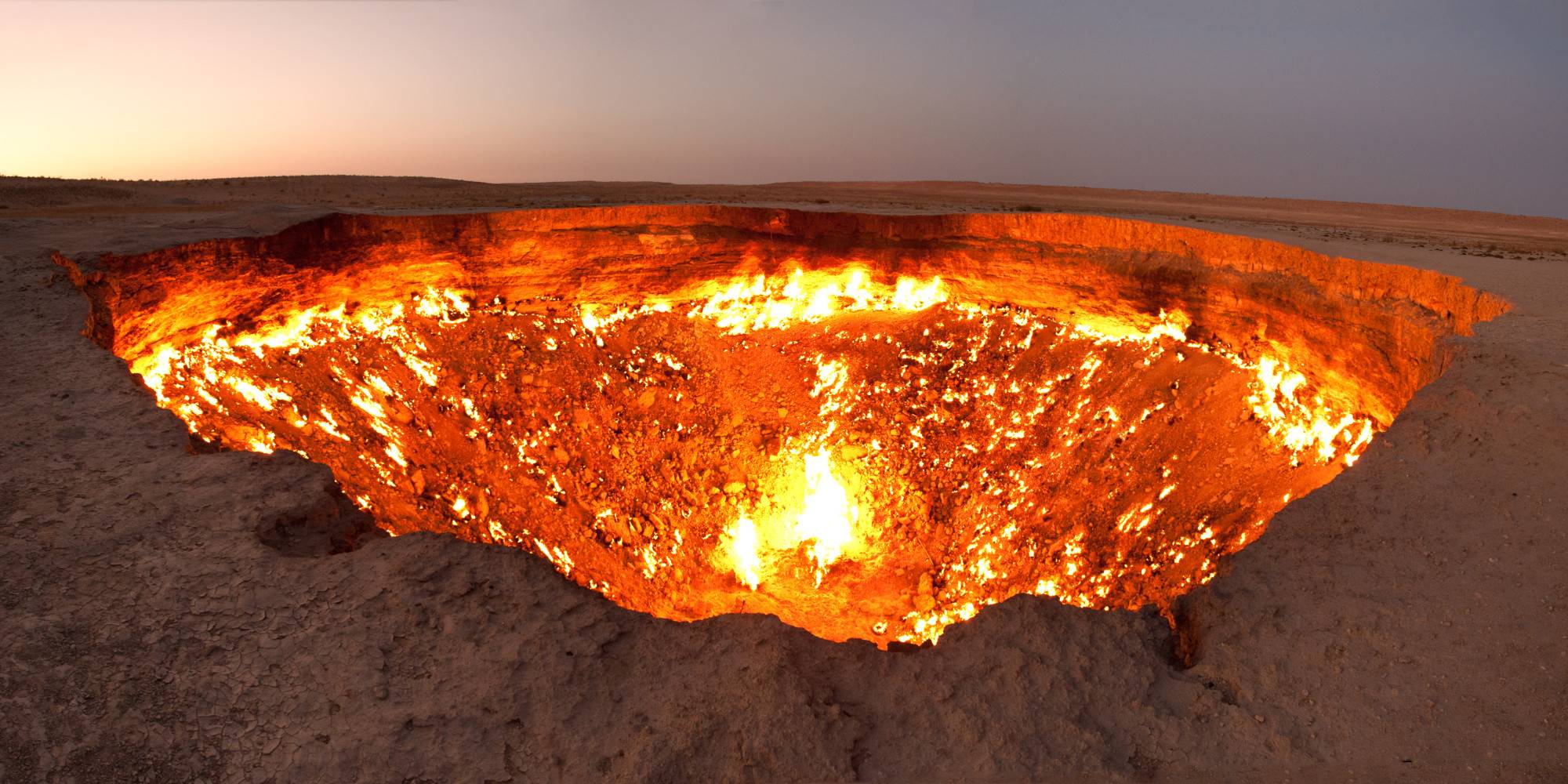 Basically it was a site for natural gas mining. But the setup collapsed into the ground and the folks set the crater on fire to prevent the leak of methane into atmosphere. That was done in 1971 and ... the methane supply has not stopped leaking yet and the place is still on fire after 45 years.

So you can have such a scenario in your world where there are several such locations where natural gas (methane) leaks in the environment. There are natural confinements which stop methane from being freely released into the atmosphere (networks of caves maybe?). Methane gas keeps on collecting in those caves (with a small amount of it leaking into the atmosphere) when in an instance it all goes into a terrible explosion audible from dozens of miles away. Static electricity is considered the cause of these explosions. You can have several such craters on your planet. As a general rule, the lesser the age of the planet, the greater chance there would be to have more natural sources of natural gas.

You can also use other flammable gases such as hydrogen (not suggested because it is so lightweight, it is nearly impossible to contain it in a cave system for enough time to allow for a massive explosion), ethane (C$_2$H$_4$) and hydrogen sulphide (H$_2$S).

Another option for having huge combustions is to increase the oxygen content in the air. This would not put the whole atmosphere in flames, but the chances of things going up in flames and the extent of those burnings would be immensely greater than what we have on Earth now.

For example, take the case of Carboniferous Period. The oxygen content in atmosphere at those times was ~35% as compared to ~21% (by mass) today. Scientists expect that forest fires then were horrible and much more common than they are today. We don't know exactly how they would have looked like, but a scenario like this comes to mind ... 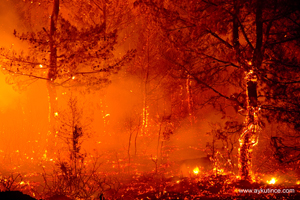 So, you make you're atmosphere pretty normal but you give your landscape a lot of very very deep, enclosed pits valleys and canyons.

Also make it so that strong winds and storms are very rare. 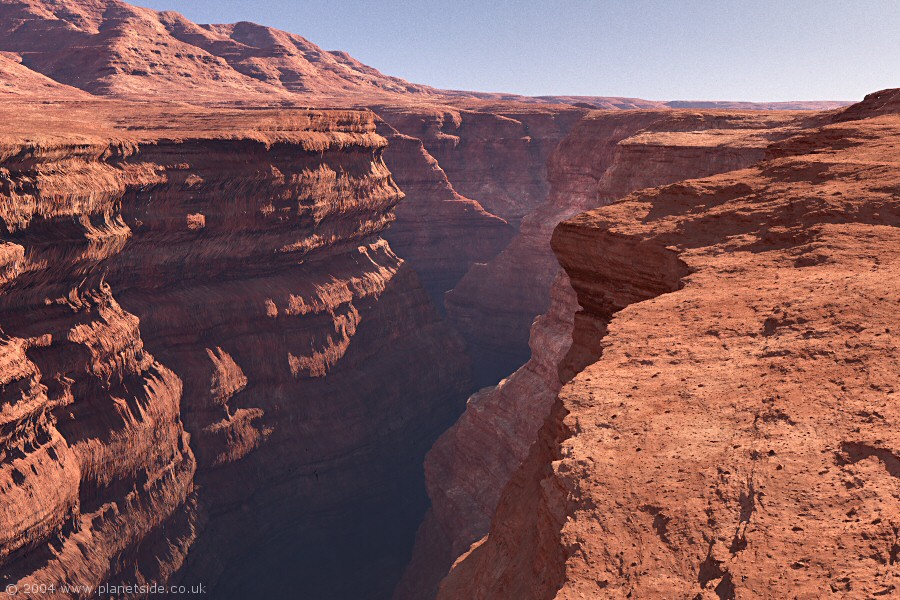 You have some plant which as part of it's life-cycle produces a flammable but extremely dense gas, not sulphur hexafluoride but something flamable and similarly heavy. 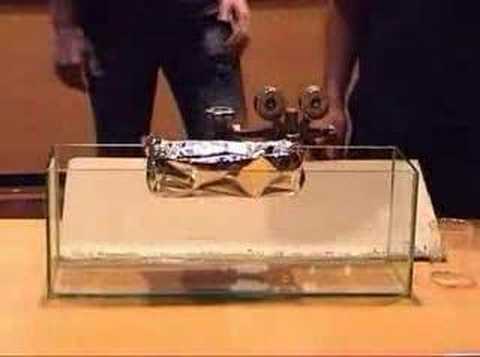 So, the heavy gasses get trapped in the canyons of your world. Now we don't want them burning off every day in boring little puffs so lets work out some way to exclude oxygen.

Have a second plant organism which lives in the canyons slowly breaking down the gas and produceing a lot of CO2 which then forms a layer above your flammable gas.(to keep it from burning/reacting with oxygen during normal times)

So these canyons are death for humans but the surface is normal. Normal right up until a storm hits and churns up the air. Suddenly the flammable gasses are rolling across the landscape and potentially suffocating people until lightening strikes or the cloud hits something burning... now you have square miles of burning gasses. The fire itself churns up the air more and sucks more gasses out of the canyons in a gigantic firestorm. 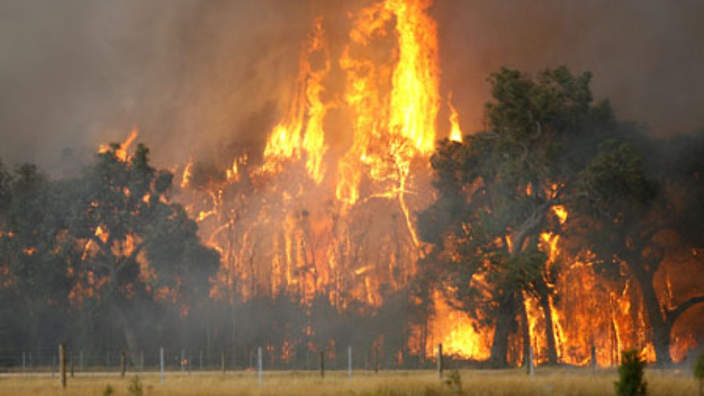 Boost up the oxygen concentration by just a bit - it doesn't take a whole lot.
I heard somewhere that at 24% oxygen, we'd be spontaneously combusting much more frequently. The most reliable source I could find for that in a brief search was this from the UK government, which just notes a marked increase in fire dangers. (Edits with better sources are most welcome.)

Of course, oxygen by itself doesn't burn, but there could be a bit of methane (e.g. leaking natural gas) or other combustible gases mixed in with that atmosphere. The concentration of combustible gases could rapidly increase in a given area similar to how some recently discovered craters in Norway were formed (which is offered as an explanation for the Bermuda Triangle):

The scientists explained that explosions causing the craters to open up could pose dangers to vessels travelling through the area, explaining the disappearance of ships and aircraft. Russian scientist Igor Yeltsov, the deputy head of the Trofimuk Institute, explained, “There is a version that the Bermuda Triangle is a consequence of gas hydrates reactions. They start to actively decompose with methane ice turning into gas. It happens in an avalanche-like way — like a nuclear reaction — producing huge amounts of gas.”

...and that is flammable gas.

You'd also still likely need an ignition source, such as volcanism, lightning, meteors, or naturally concentrated solar-thermal with some reflective rocks. Given how similar this proposed atmosphere is to Earth's, phenomena like lightning would still be possible.

Not the answer you're looking for? Browse other questions tagged planets atmosphere gas or ask your own question.

4
How to alter the atmosphere as to make aerospace engines highly volatile?

6
Could there be an upside down hurricane on a gaseous super-Earth
5
What is the smallest change that would allow an Earth-like planet to have atmospheric CO₂ levels of several percent?
6
The Great Deoxygenation Event
3
Is this planet's sulphur dioxide atmosphere feasible?
6
Is it possible to have a planet with earth-like mass but double the atmospheric pressure?
10
Would A Biological “Cold Haber” Process Deplete an H2/N2 World of its H2 or N2?
5
Life-supporting climate for an organolithium planetary environment?
1
Calculating average sea-level air pressure