So we're talking people living on top of 30 miles of topsoil, fake dino fossils and water on the outer surface on a hollow (but sturdy) unobtanium sphere with a radius about 1 AU. The sphere has an intermediate sized singularity at the core providing gravity of $1~g$ at sphere surface.

How can I provide sufficient lighting? I am not fussy about things like day length, I just want some light both equatorial and in my polar regions. How do I get it, without further liberal use of unobtanium?

So I've been toying with the idea of a large Niven-like world. I don't like rings however. So instead, in an act of cosmic vandalism, I've handwaved in a hollow unobtanium sphere, using its frankly unbelievable compressive strength to effortlessly resist collapsing under $1~g$ of acceleration from a bikini-clad singularity at the center of the sphere, massing a moderate $1665~M_{☉}$ (solar masses). To make it more fun, my land, seas, tectonic simulators, dinosaur bone planters and other such-stuff is on the outside of the sphere.

This spares them from withering under the gaze of the bikini-singularity (for it is written that none shall see a near-naked singularity and live).

However, it does bring up the rather annoying question of providing adequate lighting for my inhabitants. First, however, a bit about the sizes we're talking about.

So we're talking people living on top of 30 miles of topsoil, fake dino fossils and water on the outer surface on a hollow unobtanium sphere with a radius about 1 AU.

Now, I'm ok with the polar regions being a bit dark, but I don't want them in eternal darkness either, as it tends to do nasty things to my sphere's vapor circulation (think 60 mile glaciers). To provide lighting, I'll have a series of planets (I'm thinking somewhere in the range of Jupiter to Brown dwarf in size), which contain sufficient artificial fusion burners to provide day-like illumination.

I was thinking about having them in a nice Klemperer rosette (circling about sharing an orbit, with my burners causing occasional flaring to maintain orbits) like thus (not to scale, obviously): 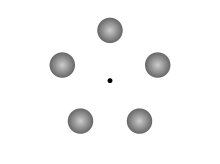 But assuming they're on the black-hole equatorial plane, this leaves my polar regions depressingly dark.

How can I provide sufficient lighting? I am not fussy about things like day length, I just want some light in my polar regions. How do I get it, without further liberal use of unobtanium?

Why are you bothering with Jovian planets with fusion reactors? Your world is 1,600 solar masses, you can have some genuine stars orbiting it.

I would use some big, bright stars placed fairly far out so the heating was as averaged as possible--the problem is not merely to provide some light, but to provide some moderation to the weather. A single sun-sized polar-orbiting sun-sized star would provide Earth-normal light when overhead and eventually cover every spot assuming the super-planet is rotating but it would take 25 days/orbit and many orbits to cover the whole thing. A ring of stars would help but if you want a stable orbit you can't really go using multiple rings.

I suspect you want something like a 60 degree inclination.

The answer is quite simple. Move the plane of the light producing bodies off the black hole equatorial plane. Frame dragging from the black hole will cause the shell-world to rotate in its equatorial plane, and the polar regions will rotate in and out of direct light, much like the poles of earth. This does cause another problem though. Having the light producing bodies orbit a Kerr black hole off the equatorial plane will destabilize the orbit you suggest, but this will work in the short term (and short term astronomically can mean millions of years), and it may be a more desirable problem to have (I couldn't say because I'm not sure what the limits you are wanting to place on your omnipotence here).

Not the answer you're looking for? Browse other questions tagged planets time-keeping dyson-spheres or ask your own question.

48
How large would a world have to be for a sailing ship to never make it past the horizon?

36
Can a planet realistically have multiple suns?
8
A more alien world: Flora
9
Mining Suns For Terraforming?
9
Explanations for a Uniform calendar in most of the world
4
Effect of brighter suns on eyes on a creature on a world orbiting a red dwarf
8
Orange Suns and Blue Jupiters
3
Is it possible for a habitable planet to have 7 suns?
4
What colour is my sky? If my planet has two different suns
1
Does this world sound realistic? (more tectonic activity)