Note: this takes place in a world populated by humanoid bears, where the population density in Siberia is much higher. The northern part of Russia is taken up by a country called Medwedia.

As said before, Medwedia takes up the northern part of Russia in our universe; both countries span eastwards up to the Pacific coast (Alaska belongs to Medwedia, a hypothetical Bering bridge will be discussed in another question).

Now... Medwedia and Russia share Lake Baikal, with two cities, Truz and Ignaz, being located on the opposing shores of the northern, Medwedian part of the lake. Truz and Ignaz are both large cities; and if a bridge would be constructed between them, there would be a full motorway that connects Medwed and Ostby. 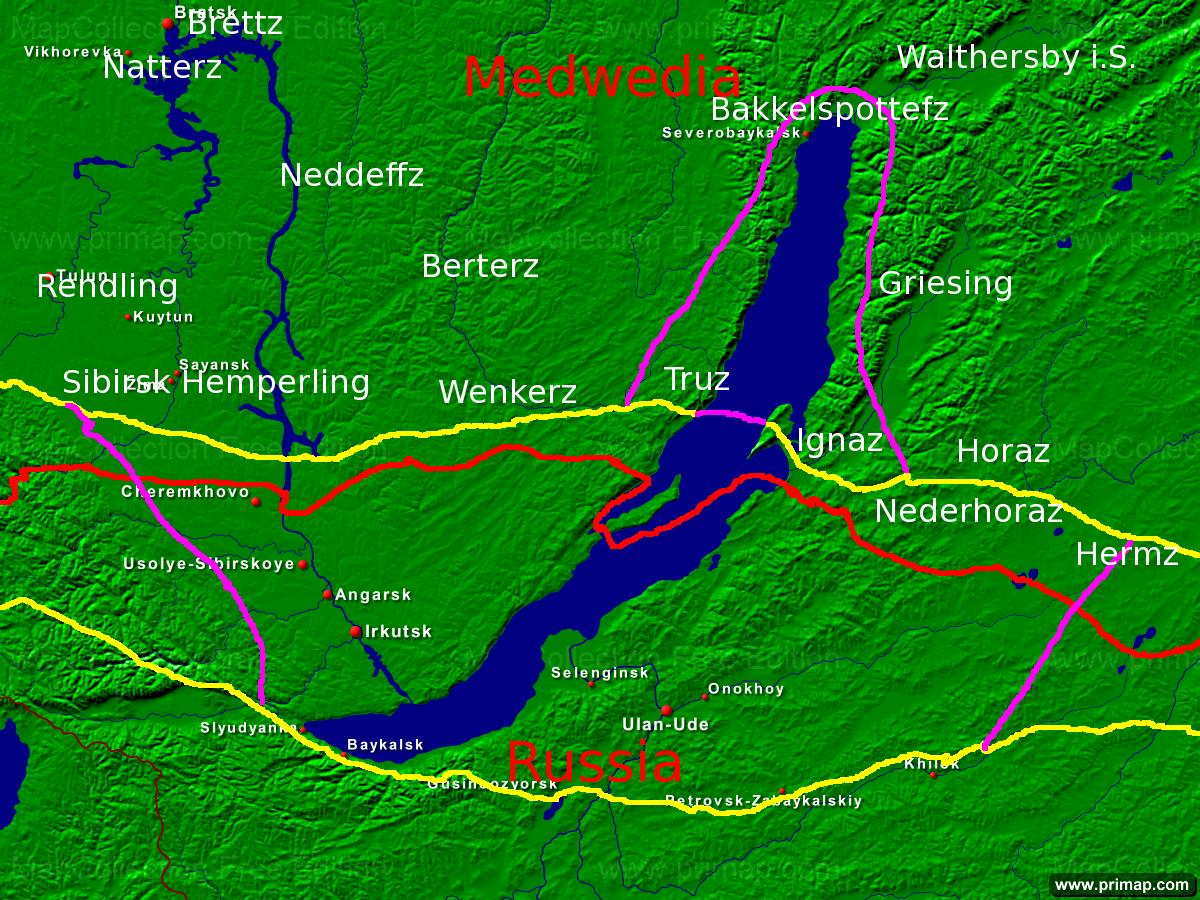 Now, (mid-20th Century), we want to connect the growing cities of Truz and Ignaz with a bridge. The bridge should consist of a motorway and rail tracks and should be usable all during all times of the year. 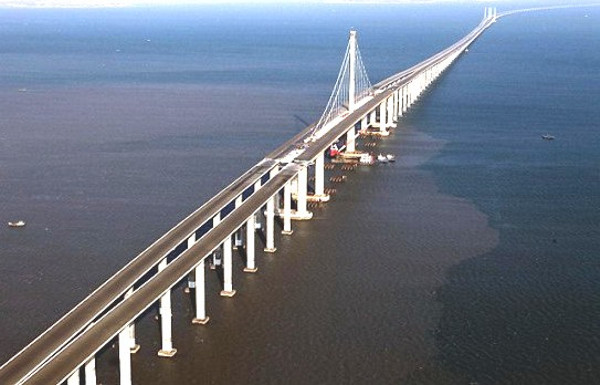 The following main problems would arise during planning, design and construction:

If a bridge can NOT be constructed under these circumstances, those alternatives which would allow for the connection of the cities of Truz and Ignaz as well as for travel between Medwed and Ostby:

Now, I am asking you the following questions:

The challenge of building such a bridge is beyond 20th century engineering.

There are some very big bridges: the bridge joining Honshu and Shikoku has a central span of 1991m But the bridge you are proposing must cross 30000m of deep water. All bridges of that length are multi-span bridges.

The water is really deep. It would be a considerable challenge to build pylons that are planted at the bottom of the lake. There was a proposal for an English Channel bridge, that would use multiple spans, in about 50m of water, it was rejected as too costly, and too disruptive for shipping. The ridge is still at a depth of about 400m, and if a bridge were to follow the ridge it would extend the length to nearer 90000m. For comparison, Lake Pontchartrain, which has a 30000m bridge over it, only has a depth of 5m.

The region is seismically active. Ensuring that the bridge can withstand Earthquakes adds to the difficulty and the cost.

A pontoon bridge might be possible. There are no floating bridges that come close to your 30000m length, but there is experience in the oil and gas industry in producing anchored floating platforms in deep water. However a floating bridge would prevent all North South shipping.

A tunnel is more realistic. But would be a massive engineering feat. The length would be greater than any existing tunnel (to allow for reasonable gradients the tunnel would need to be close to 100km long, the depth would be much greater. With enough will it could be made to happen, but the price tag would be huge. £50 billion could be a starting guess (compared with £12 for the channel tunnel) If you wanted it to be a road tunnel too, you can immediately start upping the price (rail tunnels can be narrower)

Given the difficulties the obvious solution is the road going round the lake, supplemented by ferries in summer, and possibly ice road in winter. The terrain is more manageable around the south of the lake, and the real road (P258) goes South.

Hovercraft can cross both water and ice (or, as this is Russia, Ekranoplanes). For a given weight of cargo, they're more expensive than boats but cheaper than aircraft.

Otherwise the ferry/ice road solution is workable if the ferries are ice breakers (and stay well clear of the road). An ice breaking ship can sail though ice that's thick enough to drive on, so instead of a period where you can't use either, both could be active. Perhaps heavy vehicles travel by ferry until the ice is thick enough for them to drive.

Ice roads can be thickened and strengthened by pumping water up through holes (on cold days) so that it freezes on the surface. These roads take longer to melt than the regular thinner, ice, which would also extend the season.

Bridges and tunnels are both not affordable, even with current day technology.

A pontoon bridge has little environmental impact (historically) but can buffer in weather systems on large bodies of water. While I don't think it's practical, if you insist on a bridge, this would be a great alternative. There will be no disruption of major navigation, so why not?

Not the answer you're looking for? Browse other questions tagged reality-check geography construction .

5
Arctic Airships, Part 2 - Navigation
10
Lighter-Than-Air Bridge Technology
3
Lighter-Than-Air-Bridge II: Tethered Gondolas
1
The Glory of Lake Eyre
3
How long of a clearspan could a movable bridge have with only late-medieval materials and craftsmanship?
1
Suspension Vs. Cantilever--Which Bridge Will Stand Strong?
13
How might a landlocked lake become a complete ecosystem?
16
Could Byzantines bridge a deep strait separating 2 continents?
5
Plausible design/size of flying cities?