Can you just wait out the heat death of the universe?

Okay, so the heat death of the universe is approaching. You can't stop it. You can't dodge it. What do you do? You wait it out.

According to wikipedia, about $10^{{10}^{56}}$ years after the heat death of the universe, random quantum fluctuations will start another.

Therefore, it would seem that it would be possible for a civilization to hibernate. Simply stop using energy until the new universe pops up. Maybe put yourselves in a bubble?

Note: I guess the question is, is this fundamentally impossible. I have a feeling it might be, but I'm not sure.

Based on the request for a hard-science answer instead of the one I put above. I'm keeping the other one because it is a lot more accessible. Exploring surviving the heat death of the universe calls for exploring the fringes of math, society, science, and survival.

The first issue is defining what a bubble is. If your bubble is viewed as "part of the universe," then heat death has not yet occurred because your bubble contains information. So you clearly intent to treat the bubble as "outside of the universe," which by the same definitions as heat death means you cannot make classical measurements about the state outside the bubble. See Maxwell's daemon for an argument why.

Now the problem becomes that the universe is not reborn in $10^{10^{56}}$ years. Quantum mechanics doesn't do things on a schedule. What that theory actually states is that it is possible that, through quantum mechanics, a waveform similar to that of a universe (such as a dirac delta function that could serve as a big bang) will occur due to random effects. Two key takeaways here. First it assumes that QM is 100% correct that there is absolutely no correlation between particles which cannot be modeled as random variables, and that those variables all are subject to the Central Limit Theorem. In this case, the rebirth of a new universe will occur at a time also specified by a random variable with an expectation of it occurring at $10^{10^{56}}$ years. If you popped your bubble too early by 0.000000000000000000000000000000000000000000001%, you would find that you would be so far off that even a "bubbled" black hole with all the known mass in the universe would evaporate before genesis reoccurs. If you pop it 0.000000000000000000000000000000000000000000001% too late, you will miss genesis of the new universe, miss it evolve, and wake up during its heat death after all of its black holes have vanished. In fact, you wouldn't even be able to tell the difference between the two cases, because there would be so little information in the universe to study! (and actually, the bounds are much tighter than that. The actual bounds have roughly $10^54$ zeroes in them! I just didn't feel like holding the zero key down so long that we would start to enter heat death of the universe before we finish this answer!)

This means we need to relax the "bubble" requirement. We need to make measurements of the space outside to observe the new universe happening. One approach would be to rely on purely quantum interactions which transfer no energy, but the best that's going to do is give us a probability of the bubble popping at any given time. We need to make real measurements. This means energy goes out of the bubble, and energy comes into the bubble. Now we are part of the universe, because we are interacting thermodynamically.

One of the side effects of this is that we now apply thermodynamic laws, which state that energy will always transfer from the hot side to the cold side. The universe outside is the cold side, so energy will seep out. You are now playing a game of Russian Roulette: will a random universe appear outside before the same forces that make random universes tear apart your bubble.

If you use an amount of power proportional to the energy you have stored, the pattern works. At first you lose more energy than you gain information, because nothing interesting has happened. As you continue, you expend less and less energy, exponentially. Such a curve only ends when you run out of bits of entropy. As long as you expend a small enough amount of power, you can let the heat death of the universe outrace you, and wait for the new begining.

How could this work? We went to two extremes. Quantum interactions provided no classical information to decide when to pop the bubble. Classical measurements provided that information, but had entropic costs. What about in between?

There is some recent development in Weak Measurement, which is a QM approach to gathering information about a system while learning much less about the average state of the system than usual. For example, consider a case of polarization. We are used to measuring photons classically to determine horizontal or vertical polarization. We are used to measuring photons with pure quantum entanglement, but that doesn't generate any information. Weak measurement provides results like "There is a 10 degree difference in polarization angle between the measured photon and the photon you just weakly entangled with it." You still don't know much about the angle, but you know a way to calculate it.

This approach can permit measurements which have the appearance of a fractional bit of entropy associated with them. This is demonstrated for such QM operators using the "gentle measurement lemma."

Construction of this is the tricky part. In particular, it is impossible to prove that it will work using modern mathematics. To ensure the power used is proportional to the energy in the bubble, your bubble making engine needs to "know" how much energy there is. However, to do that, it needs to know how much energy is in the energy knowing system, and so forth. As it turns out, modern set theory has an axiom, the Axiom of Regularity, which forbids such self-referential structures. You would have to use one of the alternative set theories that are being developed which permit urelements such as Quine atoms, and then you'd need to go make sure your scientific theories do not fall apart in such systems (such set theories are not "well founded" which has some pesky consequences).

In the end, you may be able to do it, but using existing math and science it would be impossible to prove that the bubble you constructed will do the job, with 100% success. You'll always have some uncertainty.

But, perhaps, when dealing with the certainty of heat death, maybe we can accept not knowing the future in exchange for avoiding a known undesirable fate.

"Surviving" heat death is not a small task. Not small at all. In fact, not only are there fiction writers who talk about it, such as Stephen Baxter's Manifold Time, there are in fact philosophers who discuss it. Nietzsche wrote about "The Last Man" in Thus Spoke Zarathustra. The Last Man was a society whose sole goal was the continued persistence of their society. Zarathustra loudly decried this, for you need some goal deeper than just continuing.

To survive this long, we need to think in terms of information. What information survives. Our bodies don't stand a chance. When you're talking about proton decay, the concept of a modern H. sapiens body surviving is utter lunacy. However, we could become something which is closer to the ideal concept of information. If we thought that way, our goal is to preserve the information that makes us 'us.' We have to preserve it while the media we store that information in slowly degrades from heat death.

If we can measure how much energy we have stored up, and spend an amount of power proportional to that energy in maintaining information, such as correcting bit errors due to degradation, there is theoretically no limit as to how long one can persist. The hard part is how to do that for long periods of time. You basically have to create a heat engine which "evaporates" the outer layers of your ordered structure of information to provide the energy needed to maintain the core information. It's actually remarkably similar to evaporative cooling, just at an information theoretic level.

The effective limit of this process is when you can no longer maintain the proportionality of energy stored vs. power consumed. At some point, you may hit quantization issues where you simply cannot make your bits any lower energy than they already are, and you cannot afford the energy expenditure to correct them.

The key to this process is that Wikipedia is wrong. The odds of quantum physics remaining the most accurate model of how our universe works for the next $10^{10^{56}}$ years is pretty darn close to zero. We will find a more valid model, and at that time we will want to adapt our survival process to match whatever new discovery we have. For all we know, if you carefully arrange quarks into a row to write out ↑↑↓↓←→←→BA, maybe the universe will provide a way to violate conservation of energy. Or maybe we finally find out what the ingredients are in this pill, and take the next step: 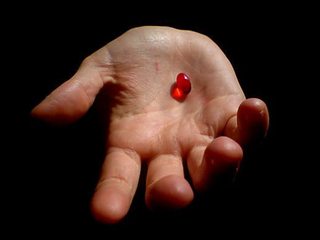 The heat death of the universe is predicated on the idea that it is a closed universe. Therefore the conservation of energy and the arrow of entropy dominate. But we live in an expanding universe, an accelerating expansion at that. Given that space actually has energy associated with it, where is the energy coming from? Of course there is dark energy, and many believe that this implies additional energy is being created. So if one could find and tap that source...

And while you're waiting it out what is going to protect your equipment? The same forces that have ravaged the universe will ravage your own equipment, it's going to decay away.

http://crowlspace.com/?p=1118 is quite an interesting read. Basically it combines 2 theories, one that black holes could survive a big crunch, and another that aliens could live inside the event horizon of charged, rotating black holes. Of course the aliens would be trapped, until some unwitting explorers entered with their ftl spaceships, giving you honest to god Cthulhu. Of course, you are asking for what would happen in a heat death. The wikipedia article https://en.wikipedia.org/wiki/Hawking_radiation for Hawking radiation states a black hole lasts before evaporating for a time

so you need this time to be at least 10^10^56 years, and then the aliens can use their alcubierre drives or whatever to escape the event horizon. Of course, this puts the mass needed at 10^10^55 kg, several billion times larger than the mass of the universe. Of course models of the universe including more dimensions, and having the black hole spinning and charged could adjust this mass to a more favourable amount.

Not the answer you're looking for? Browse other questions tagged science-based hard-science apocalypse post-apocalypse universe or ask your own question.

104
How to survive the heat death of the universe?