What motivation would people have for mining planetary rings?

People have proposed mining the moon for Helium-3 and mining asteroids for gold, iridium, and other precious metals. Suppose we have the means to do so in an economically-viable manner. We've got fusion power for long-term power generation far from Earth, space stations that can deal with the major problems of humans living in space for long periods of time, and clean-fusion based plasma thrusters with specific impulse measured in the millions of seconds range for scooting about the solar system.

With all of these developments, would there be any economically viable reasons to start mining the rings around the gas giants? What resources could be found there that would motivate people to start mining there, instead of hunting for those resources in other environments. Lastly, if the resources found in planetary rings aren't worth obtaining at the proposed level of technology, what sort of technological developments would be required to make such mining operations economically viable?

I don't have a great grasp on the physical sciences, so I'll focus on some economic possibilities:

*The doc on the "science-based" tag leaves open an explanation based on social sciences. Which is what I'm banking on.

There isn't one. I'll use the rings of Saturn, the largest ring system in the solar system, for an example.

First, there isn't much there. Estimates are 3 to 21 x 1019 kg, or about 1/1000th the mass of the Moon. That's nothing to sneeze at, but it's a long way to go for not a lot of material. Saturn has seven moons with more mass, FAR more mass. Jupiter, Neptune and Uranus' ring systems are in the 1016 kg range, about the same as a 20km wide asteroid but spread over hundreds of thousands of km3.

Second, it's 99.9% water ice. (Other ring systems contain rocks and dust, but there's not enough to be worth the bother). You might think, "we'll mine for water!", but that leads to the next problem...

Third, water just isn't that valuable. Most sci-fi presents water as this super rare stuff with dry, rocky planets barren of the stuff. It turns out water is everywhere in the Solar System in huge quantities as ice. For example, Ceres might contain colossal amounts of water, as much as in the whole ring system, though you'd have to mine and purify it, that's not difficult. It's very easy to make water out of almost any material with sufficient energy, many chemical reactions create water, that's why there's so much of it lying around. It takes a lot of energy to get to and from Saturn's rings, so you might as well use that energy to go somewhere cheaper and make or mine water. That leads us into energy cost...

Fourth, Saturn's rings are a pretty expensive place to get to and from. They're very close to Saturn (closer than the Moon is to the Earth) and Saturn is very massive and the rings are deep in that gravity well.

Assuming you're already in a Saturn transfer orbit, getting to and from Saturn's rings costs a delta-v of about 10km/s2 each way which is almost as much as it costs to escape the Earth. There are ways to get water in the Solar System with much less delta-V (ie. cost).

It's less expensive and more efficient to mine a gas giant's moons than to mine its rings. There's more material. There's more diversity of material. They're more dense. They're in a wide variety of orbits, usually far higher than the rings requiring less delta-V to get to and from.

The human race is going to keep consuming resources - exponentially more resources, I might add. Thus, there will always be a reason to keep exploiting the resources of our solar system.

The problem with mining the orbital belts is that it's Dangerous, Fuel Intensive, and attracts hippies.

You've got big rocks spinning around in a circle, smashing into other rocks, breaking into pieces, then smashing into more rocks, to make more pieces which ... I think you get the idea.

You're gonna need a lot of very tough ships to start wrangling those meteors out of the orbital rings - we've established that. However, you have to consider that once retrieved (a fuel intensive maneuver in and of itself) the rocks must now be taken somewhere for processing.

You might have a giant refinery parked close by, which is great! But you had to move into place, and now you have to expend fuel to keep it there.

If not, then you're wasting a lot of power/fuel carting those rocks some far away place for processing, which is a deal breaker for any profit oriented business - after all, what percentage of their mass is useful to you? 5% is probably generous.

No, my friend. No one is going to be investing into your orbital ring mining business any time soon. They aren't interested in that bridge you're selling either.

Yo, dude. Those orbital rings have been around for millenia before you came along and started exploiting them for your own gain! Boycott the evil company! Sabotage their mining drones! Beat up their employees! Save the rings! SAVE THE UNIVERSE!

No one likes space hippies.

Mining orbital rings would either come about as a result of a civilization being absolutely desperate for a certain - very rare - resource, or simply because they lack the capabilities to mine the larger, more resource rich asteroids drifting through our solar system.

Maybe a bunch of meteors rich in a very rare, alien alloy crashed into planet X at a certain point in time. Many of the smaller fragments are now caught in the planet's orbital ring system. If the allow is that valuable an industry might develop around surveying the rings and trying to find as much of it as possible (think Gold Rush style prospecting, etc.).

bonus points to anyone who read #3 in a "hippie voice"

Mining the orbital rings of any planetary system (Saturn, Jupiter or Uranus all have known ring systems) is a relatively economical way to gather materials that you might need for living and operating in that region of space.

The rings of Saturn are mostly water ice, which can be quickly rendered into water for your life support system, used as radiation shielding, directly as reaction mass for many types of rocket or broken into H2 and 02 for rocket fuel, chemical feedstocks and breathing oxygen. Dusts might contain volatile elements or metals which can be useful for life support as well.

Moving around in the ring systems is fairly easy (minimal deltaV needed to go from place to place in the rings), and in a military scenario, this is one of the few pieces of "terrain" where spacecraft or even space suited people could operate with less possibility of being detected.

That said, you still have the disadvantages of operating near an immense gravity well, so getting too and from the rings to the rest of the solar system will be energy intensive. You also have to factor in the possibility of collisions with orbiting ring objects, and considering the high relative speeds of objects in space, this could be devastating to the spaceship. Finally, as noted, the rings are rather ephemeral, so you are not going to sustain a massive mining operation, much less a civilization, on just what can be mined from the rings.

No fuel required to float around in orbit. Only to move between bits.

The bits are easy to identify and decide upon, being only meters apart in some places.

Advanced civilizations need more materials, and presuming they're in the area...

Guess how much ice there is. Lots. Guess who wants it. People in space.

It won't really run out

There's a lot of the stuff.

What if the ring system in question is the exploded remains of a moon made of handwavium by a hyper-advanced ancient civilization? There would be a lot of the stuff on the surface of the planet too (concentrated in a band around the equator?) but in orbit it's easier to get to.

If you're there anyway, like in an orbital habitat that's within spitting distance, on an interplanetary scale at least, of the rings in question you may as well get what you can. The main thing I would expect would be mined would be life systems material like the water in Saturn's ring system but it would have to be economically favourable compared to transported material rates; if you can get all your water and oxygen, for the lifetime of the outpost, cheaper from comet and asteroid mining or even planetary sources than the equipment to harvest locally you won't do it. Unless it's a matter of principle, some people like to be independent and the cost be damned, those who don't want to depend on outside sources for anything they don't have to would probably pursue this route regardless of relative costs as a matter of course, not considering it strange to pay several times as much as their neighbours for those materials they consider vital and not to be risked to the hands of outsiders. 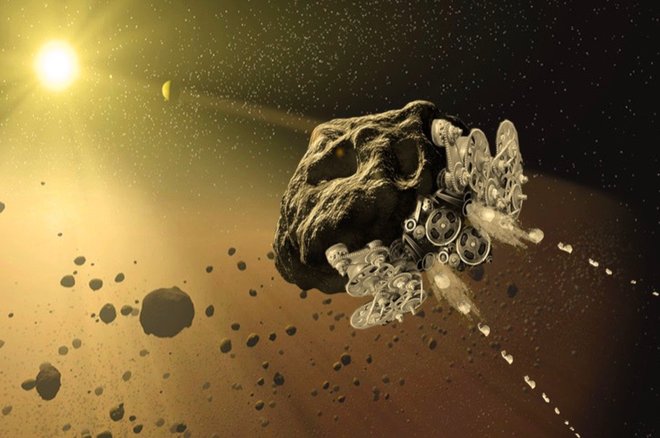 I was thinking about this in the context of this question. The Colonist - Part I: Construction

This first question focuses on the building process of a Colonist. The original idea is that the ships are built completely outside of Earth in Space Shipyards located in orbit (kind of like the ISS).

Is it possible to build such an enormous ship outside of Earth?

A giant space rock of suitable composition is a fine starting point for space ship. It is already in space and you do not need to drag it up out of a planetary gravity well. It is already of a piece. It is solid stuff which can protect against radiation. All you need to do it hollow it out and attach ship stuff in and on it. Maybe a coat of paint.

The rings are full of space rocks of all sizes, spread over an immense area. In your space mining future, the main use for rocks from the rings is the construction of space ships. Ring prospectors seek out rocks of suitable composition, roughly hollow them out (less mass to move and no-one cares if you make a mess in the ring), then hook on minimal propulsion equipment. The raw hull is flown (or towed) to the shipyard where it is sold to the highest bidder.

Not the answer you're looking for? Browse other questions tagged science-based near-future planetary-rings mining .

11
What is a good reason not to mine a planetary ring?
5
The Colonist - Part I: Construction

18
What would be the first thing humans would mine on Jupiter?
6
Planetary rings: colour of the rings and sky
25
Which gas giant of the solar system could humanity mine and for what resource?
20
What would the sky look like in the SHADOW of planetary rings?
0
Consequences of dark planetary rings?
7
Unprepared and Without a Homeworld
13
How to explain planetary rings pulsating?
14
Will asteroid mining be economical in foreseeable future?
6
Making a Plasma Gun that works
0
Are Orbital Rings feasible to construct in another star system?