Would primitive weaponry be useful when scaled down to microscopic size? ( series )

As part of a series of questions that I've been doing about microscopic humanoids ...

Would weapons such as axes and spears be useful when scaled down to such sizes , especially against small arthropods such as ants and Pseudoscorpions?

No, your humans are too small.

Here is a human and an elephant for comparison. 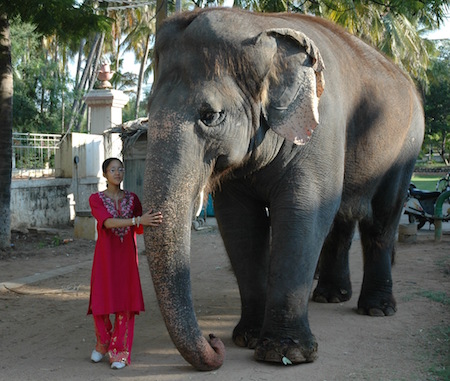 Your humans simply would not have enough mass to affect an ant. Nor would they have enough height to do anything but poke at its legs.

Trying to scale humans down has myriad problems. This video on What Would Happen If You Were Shrunk? by VSauce3 scratches the surface.

What humans are good at is throwing rocks. That should be sufficiently primitive.

Here, like in many other cases, the cube-square law causes problems. A stone is 8000 times smaller, thus it has an area that is $6.4*10^7$. Its volume, however, is $5.12*10^{11}$ times smaller. Having the impact concentrated on a small area is how spears work, and the rock's impact is now much less concentrated. But it gets worse, small creatures can not throw a rock as fast as large creatures. All in all, rock throwing is much less dangerous. Sure, they might push the target a little, but nor brake bones or cause wounds.

Same for a spear, but there, the cube-square effect is cancelled but the fact that it is 8000 times sharper. It is however moving much slower, so no weapons based on hitting the enemy is very efficient.

Basically, what Schwerm has stated. No, you cannot use these weapons effectively against those threats. At 0.2 mm (max limit), your people would be able to wield a spear hardly more than 0.3 mm. By comparison, even a juvenile ant is around 3mm and has 6 legs AND a pair of powerful denticles. An ant bite can send pain waves even in a grown up 6 feet tall human being. How do your people can fare against such a threat when being 1/30 of its length?

To help you think in perspective, would you be able to fight an ant that is double the size of a T-rex? It doesn't need to bite you at all (which would instantaneously clip you in two). Just a stomp by that monster ant would be enough to painfully end your life.

Also keep in mind that arthropods have exoskeletons, so that your weapons would hit the harder parts of the body first, which further implies that you will not be able to punch a hole through your arthropod adversaries (in perspective, a 6 foot person would have to punch a hole in 2 feet thick bone before his spear could hit the softer tissue inside).

So all in all, no. The weapons would be as useless against such adversaries as you trying to bring down a T-Rex with a spear.

While attacking the traditional way will not work, your humans are small enough that they can crawl in through the joints and other openings on your ant. When inside, they are still large enough that they might survive the immune system for some time. Risky business, but such is life for any creature that small.

Inside, the small spears and knives could do significant damage. Maybe the humans could even accomplish rudimentary control of the ants, like some parasites do in the real world.

I'm looking at Schwern's illustration when contemplating it, BTW. Diagrams like this ought to be part of the OP's posts. Now that he understands the scale that should be presented goin in rather than needing to be a major part of the answers, for subsequent questions in his series.

Anyway, poison comes to mind. As does a rope covered with sticky stuff that the ant can't break free of, to get tangled up in or at least get teathered with!

More intelligent then sticks and stones would be to use chemical pheromones. Make the ant do what you want, go where you want, including in a pen or cage. Make it hold still while you attachnthe reins, make it refuse to perceive any alarm even as you dismember it.

Keep in mind that an average human is able to feel motions and surface inconsistencies of about one micron in size by touch, scale this down by a factor of 10000 (from 2 meters to 200 microns), then you are looking at a race of microscopic humanoids that can feel individual atoms(0.1nm) by touch, in a sort of Biological Atomic Force Microscopy. a Human fingertip can manipulate, in minimum, an object the size in the millimeter range, scale this down by a factor of 10000, then the smallest object your microscopic humanoids could manipulate is about 100 nanometers--the size of most biomolecules. their hair (if exists) would be about the same thickness of a chromatin fiber of most cells, and most proteins will feel like grains of sand to their touch. with a sharpened stone tool, your microscopic humanoids could easily manipulate atoms and molecules to create some of the most Formidable poisons any living being could only dream of--simply make something that will fit in to the protein molecules you want to target, and you now have a poison that will take out an entire ant with a single microscopic pinch of your humanoids' hand.

In comparison, most bacteria will be about the size of the fingertips for a Humanoid organism 200 microns in length. So bioweapons in the form of a deadly pathogen will also work for the microscopic humanoids, as most arthropods do not have an adaptive immune system, a simple breach in the joints of the ants with a deadly pathogen inserted into the Haemolymph of your target/prey is enough to take down even the largest, strongest of all ants and tarantulas.

14
What weapons would be effective at a microscopic level?