As we know, solar power is the ultimate source of energy for mankind, and it's the most abundant(I have read that we receive more than 1000 times the energy we currently use, if we were to have a way to utilize all of it).

The power of solar is weakened because of the 93-million-mile distance between us and the Sun, so the energy we receive is very dilute and utilizing it is difficult. But what if we were to change that?

If we send a satellite close to the sun(as close as it can handle), convert the sunlight that falls on the satellite into broad laser beams and transmit to receivers on the Earth, we could get far higher energy densities than what is currently being done(one could think of the Icarus from the Bond movie Die Another Day.) There would be losses, but I doubt they'd be higher than they currently are. Then once on the Earth, we could use large lenses to dilute the energy back to the level on which it could be fed to heavy-duty solar panels.

Apart from the high cost of robust materials needed to sustain all that heat(we could use tungsten, for example, for the satellite body), what are the other considerations for this? Is there any obvious flaw I haven't noticed?

What are the other considerations for this? Is there any obvious flaw I haven't noticed?

Yes. First, there's plenty of solar energy at the Earth to be harvested with current technology. Second, there's much cheaper places to put space-based solar collectors than near the Sun. And third there's the small problem of creating an unstoppable weapon of mass destruction.

The amount of energy we receive from the Sun depends on where you measure it, at the surface or at the upper atmosphere, and if you measure total energy received vs energy we can likely utilize using today's technology.

The Earth currently consumes about 12 terawatts (TW). What do we get from the Sun?

At the upper bound, the Earth receives 174,000 TW at the upper atmosphere. That's what we'd get if we covered the whole planet in orbiting satellites with perfect efficiency. That's 14,500 times our energy consumption. No problem there! But obviously unrealistic.

More realistic is the potential energy we can harvest on the ground using today's technology. The UN World Energy Assessment in 2000 calculates that our realistically harvestable energy potential is anywhere from 50 TW to 1500 TW or 4 to 125 times our current consumption. See pages 162 and 163 (173 and 174 of the PDF). They conclude...

The solar energy potential in table 5.19 is more than sufficient to meet current and projected energy uses well beyond 2100. Thus the contribution of solar energy to global energy supplies will not be limited by resource availability.

So we have plenty of solar energy right now on the Earth.

To paraphrase the What If hat guy, "what if we wanted more power?" Ok, let's just pretend we need more power. Where do we put our space-based solar collectors?

Sending satellites near the Sun is very expensive, more on that below, so before we considered that we'd first consider cheaper places to put solar collectors to increase our supply. This image illustrates the cost, in km/s delta-v, of going to various points in the solar system. 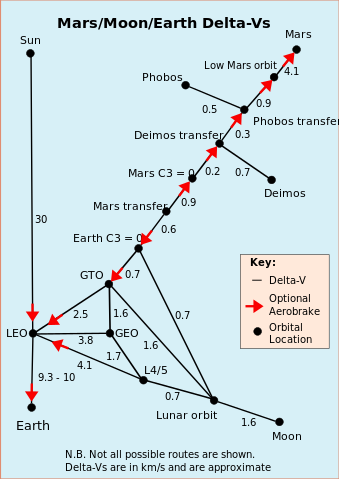 As you can see, just getting off the Earth and into Low Earth Orbit (LEO) is quite expensive. Getting to the Sun requires three times the delta-v, but because of the tyranny of the rocket equation the fuel cost increases by nine times (this changes depending on the propulsion method used, but point is it gets expensive fast). So we want to put our solar collectors in places with a low delta-V, and the Sun is the worst for that.

We'd start with the obvious choice: Low Earth Orbit or LEO. This would avoid solar energy absorption by the atmosphere, about 30%, and it doesn't require using land for solar farms. The increase in LEO launches would drive down the cost and allow funding of even cheaper launch technologies such as a space elevator or launch loop.

LEO is already a pretty crowded place, and we don't want to shade the whole Earth, so the next target for our energy hunger would be to expand the total area we're harvesting.

The next target for our launch budget is the L4 and L5 Lagrange Points. These are points 60 degrees in front of and behind the Earth's orbit around the Sun around which a satellite can make a stable orbit, effectively parking them there. Getting there only requires about another 2km/s more than GEO.

At this point to further increase the surface area of sunlight we're collecting we'd get into things like Dyson swarms and Dyson bubbles which ring the Sun, at whatever orbit we like, with collectors.

The nice part about a swarm or bubble is it can be created gradually by adding more collectors to the swarm. As you add more collectors you increase your energy budget to build and launch more collectors. I covered this in another answer about peak sunlight.

Accidentally, or deliberately, these solar collectors are capable of focusing terrawatts of energy, equivalent to a high yield nuclear explosion, at any point on the Earth. Whomever controlled the collectors could ransom the planet. Even if we trusted this organization to be good, there is a risk of them being taken over. Unlike a nuclear power plant or nuclear weapons which have humans to guard it, these collectors would be remote controlled. One hacker could vaporize a city.

You've stated the flaw in your question: We receive more than 1000 times the energy we currently use.

We don't need to build large structures near the sun to use solar power, because we already receive plenty of it; we simply need to build more solar power plants on the Earth, where it's almost infinitely cheaper and easier to build them

The idea is already in research.

The two main problem are:

The idea of having platoons of solar energy satellites (or just covering the surface of Mercury with solar cells) goes back a long way; Dr Robert Forward proposed something along these lines to generate terrawatts of energy to pump a massive laser or series of lasers to propel a "light sail" o an interstellar voyage back in the 1980's. Launching alone would require @ 7 tW of energy, and the deceleration is estimated to take @ 26tW of energy. http://www.lunarsail.com/LightSail/rit-1.pdf

The scale of this project is obviously far more than what is needed for your idea, but one thing to keep in mind is the need to keep the beam focused and on the power target. For Forward's scheme, a huge Fresnel lens at a distance from the sun equal to Saturn's orbit is needed to focus the beam on the target. A similar arrangement will be needed in order to keep the power spot focused on Earth or the Moon, and there will also be complications due to the relative movement of Mercury and the Earth around the Sun. A system of relay mirrors may be needed to steer the beam so it is always pointed at Earth.

As mentioned by others in the comments, there will be a massive issue of heat rejection, not only at the power collection site, but also the laser transmitters (even FEL's have a theoretical maximum efficiency in the 65% range), through any focusing lenses and relay mirrors, and finally conversion efficiency at the receiver. Since we are talking about terrawatts of energy, even a small fraction is megawatts to gigawatts of waste heat, needing huge radiators and other apparatus (reservoirs, pumps etc.) to keep all the parts from melting.

So while it is theoretically possible, I would suggest that it makes more sense in terms of time and resources to simply place solar collectors in orbit around the Earth and transmit energy to ground receivers with fewer conversion steps and lower energy density. A very recent DoD project did some calculations (recorded in this website: http://nextbigfuture.com/2016/02/space-based-solar-power-winner-in.html), and I also draw your attention to the comments section, where a commenter named GoatGuy runs the numbers and comes up with what the true parameters of such a system would look like.

A massive capital project like building Terrawatt solar collectors and lasers around Mercury would be feasible in the mid to far future for beaming energy across the solar system to places like Neptune, where the solar energy density is far too low for any sort of solar technology to be practical.

One of the biggest weakness of the idea is actually the atmosphere. It tends to get in the way of lasers and cause them to break up or refract around in all sorts of undesirable ways. This massively increases your power losses for that final leg of the transmission and also starts heating up the atmosphere, wiping out some of those global warming gains you were hoping to make.

Not the answer you're looking for? Browse other questions tagged science-based reality-check energy power-sources or ask your own question.

4
Device close to sun to focus energy to satellite in Earth Orbit for energy generation
14
How efficient can my neutrino detector be?
9
How would you heat colonies in the outer solar system (by using natural systems)?
22
Aliens englobed the Solar System: will we notice?
3
Is it plausible to to cover a desert in self-replicating solar panels, using only the materials found in the desert?
5
How Close Can We Build Solar Collectors to the Sun?
2
How much antimatter can we theoretically hold in a Minimum Magnetic Field Trap?
5
Are Alpha and Beta-Voltaics the solution to the energy storage problem in Scifi?
8
Using planetary/stellar media for lasing
4
Can we harness energy from heliopause?