Is there a working law of gravity in 2D?

I am constructing a two dimensional world, but ran into a problem with one of the fundamental forces, gravity.

Consider a person standing on an edge of a "planet" in 2D. then, the area coloured green has an influence on you (I have made things with area have mass, in order for the concept to work in my 2D world.): 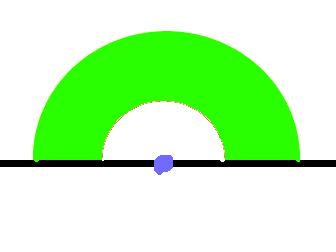 Now, consider another area with the same shape inside that one: 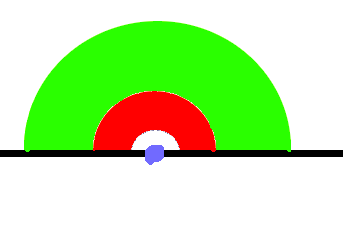 It has just $\frac{1}{2}$ the distance, thereby four times the gravity. But it also has just $\frac{1}{4}$ of the area, and therefore a total gravitational influence similar to the green area. I can continue to stack those areas, with a sum of 1+1+1+1... Every edge then becomes a black hole!

Obviously, I must then choose another exponent for $r$, and that can not be 2 or larger, because of the half-circle argument, and it can not be 0 or lower, as that would make the whole universe collapse into a black hole.

Also, I want orbits to be periodic, to make planet systems stable. I know $exp=1$ does not have periodic orbits other than in special cases, but there must be other possibilities than $exp=2$, as the case $exp=-1$ is periodic.

Is there a solution with periodic orbits for $0<exp<2$?

Unfortunately, those are the special cases. This was actually proven as Bertrand's Law which states that there are exactly two central force potentials (forces which only depend on radial distance) which can generate stable orbits. The first is the inverse-square law, which we are familiar with. The second is the radial harmonic oscillator (a oscillator operating purely in a radial direction). As you suspected, other forces can generate a closed orbit, but they are not stable. If you perturb them in the radial direction, they collapse. Bertrand's Law formulates the motion of particles in their Lagrangian form (path invariant), and then does a perturbation analysis. His law shows that the only possible forces which could lead to stable orbits are power law forces (F=r^d), and then goes to demonstrate that only 2 values for d actually result in stable orbits. One leads to the inverse square law, and the other leads to a radial harmonic oscilator.

Thanks to David Z for finding the link to the Physics.SE question which pointed me to Bertrand's law.

As an addendum, apparently one can show that there are stable orbits in 2d using inverse square laws for the forces, but they are not closed, meaning they do not arrive back at their original location. (the word "orbit" has a very precise definition in dynamics that isn't quite consistent with the layman's meaning of the term, which typically implies a closed stable orbit)

This is a fascinating question.

Newton's Law of Universal Gravitation was derived empirically, and as far as I know, nobody knows why it is the way it is or how it works. We've done experiments to determine its precision, and things like the exponent of 2 in the denominator are so precise that the idea that there's no reason that it's related to 3D geometry seems absurd to me, but this doesn't necessarily make it so.

However, physicists have drawn a parallel between electric force and gravitational force for a long time, because first of all they intuitively feel similar (both deal with objects in space exerting force on each other) and their basic formulas are similar.

So it's long been thought that their function is similar in nature.

Now, if we rearrange some of the terms in the electric force formula, we'll see something very interesting.

The equation actually contains the formula for the surface area of the sphere having one of the two charges at its center and the other on its surface.

So the following is entirely speculative, but hopefully scifi readers would be satisfied with it.

Assuming that gravity works the same way, the proper formula for a 2D world then would include the circumference of the circle with one mass at its center and the other on its circumference. So we need to alter Newton's formula by multiplying surface area out and dividing circumference in in its place.

As far as orbit, keeping in mind this whole thing is purely speculative, this should be achieved when centripetal acceleration is equal to gravitational acceleration...

Which happens whenever v is exactly right, regardless of the radius of orbit.

It's good enough for sci-fi readers, I bet.

If you want to know what orbits this equation produces I can tell you that I have run simulations using this equation and it produces flower shaped orbits.

As a constructive suggestion, you could make the force $1/r^2$ at long distances but have a short-range correction term that makes it fall off to $1/r$ at short distances. This isn't beyond the bounds of what's reasonable for a physical force.

One way to motivate this is to imagine that your 2D world is actually 3D after all, it's just that everything in it happens to be a flat shape lying in the same plane, and all objects are exactly one inch thick in the third dimension. Then if you're more than a few inches away from something the forces will behave just as you describe, but when things get closer than that they will attract each other like normal 3D objects and you won't get the divergent sum. This kind of idea could probably be couched in terms of "rolled up" dimensions a la string theory, if you felt so inclined.

If you have a minimum distance between objects (caused by some kind of small-scale repulsive force), the sum is finite (this is why we don't have infinite gravity from standing "on" the ground in 3D) Although it might still go to black hole levels if you add much mass at all with molecular-sized minimum distances.

It is well known that orbits are not periodic in a 2D universe. See the book Plainiverse by A.K. Dewdney it includes details of physics including a space station! Anyone interested in 2D worlds should read this.

The natural fall-off is exactly the spreading out factor of a force, or the ratio of the surface to the interior. So you don't get infinite cascades.

You can arrange for spirograph orbits that work well enough: the kenetic energy vs potential energy tradeoff still works, so you get an orbit-like thing with the same bounds of a peri- and apogee. It just doesn't repeat in-place on each orbit.

It seems to me that there is an error in your calculations of same gravity effect of concentric rings. Here I have added a grid to your picture: 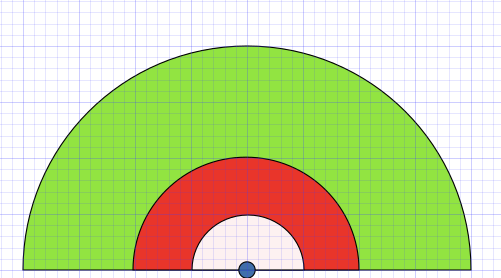 However, it seems to be more a rounding error, due to the way how more of the mass of the green ring is actually more distant from the center. If it is instead divided to two rings: 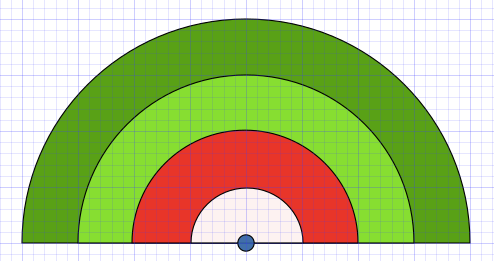 Forming the actual integral, I get as the gravity in center:

And thus there would be no more problem than in the 3D case of very thin, very dense disc. But of course it is possible that I have made error in my calculations and your original ones were correct..

I've been working on a 2d-simulation game for well over 5 years, complete with walking, interactive, balancing bipeds in $10 m/sec^2$ accel gravity at about human scales. For your question about the stable orbits, flux would have us believe it's 1/R, as described in Dewdney's Planiverse. But if you are making this as a a game for entertainment, You could take artistic license (or come up with some string theory :) to back it, and make up a gravity law. But more importantly , other things also go along with the 1/R flux dispersion, such as sound intensity. I used 1 / squared for that. Because I don't want to walk 1 km to get away from a sound. Same with, wind drag. Same reason, or stuff even in water will never stop and it's hard to paddle your boats or swim. 2d atoms are different and you don't have to assume the Planiverse model is stepped down from our theory, much of which is made to fit what we observe. I make changes for the sake of immersion, I trust the Box2d engine, and , when you have a small monitor, even if it camera-tracks, you want dramatic motion on it. Bombs, I do $1/R^2 $

so it doesn't blow over everything .. but, the Shrapnel is 1/R. You are going to get injured and so are the others.

but hey, funny coincidence, but so happens I invented a fuel pipe just today. Devsman mentioned the transport tubes. Liquid fuelled rockets, very helpful, especially if there is no escape velocity in the 1/R gravity. Dewdney and team got some things wrong, because he didn't have a 2DWORLD simulator. As for life in 2d, well, life "finds a way" -from jurassic Park.

The zipper organs are great in biology , ( i like to invent the 2D devices but i don't think most kids who play the game even appreciate it.. they just want to blow the Ardean's heads off. I think, it, it will not leak, can be strong and or flexible ( there is no buckling in 2d) and will allow a compressed gas through, that looks like this.. Can be used with gimballed or v2-like rockets with vanes. The right side drawing has some stress pulling apart the tube, so the liquid needs high pressure then if its going to the rockets combustion chamber. In the case of gravity and other dispersive flux , I used $1/R^2$, because, well , its possible that stuff loses energy , say there is friction , dark matter, curved spaces. Funny it seems the string theorists are finding the 2+1 equations the only thing they can solve for quantum gravity, GUT, string theory ..white holes, etc...( all those holographic principle reports, i tried to read the papers but i'm clueless and I don't think many, or any people are too sure about gravity theory, in the world we can observe. 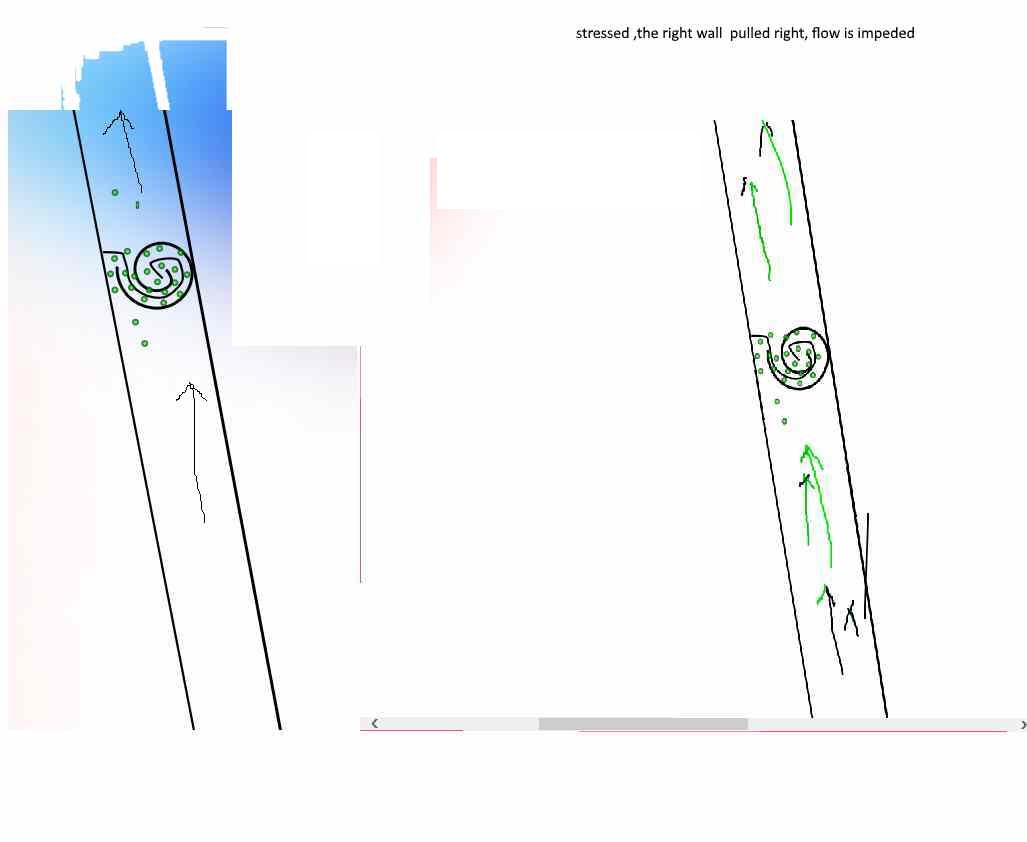 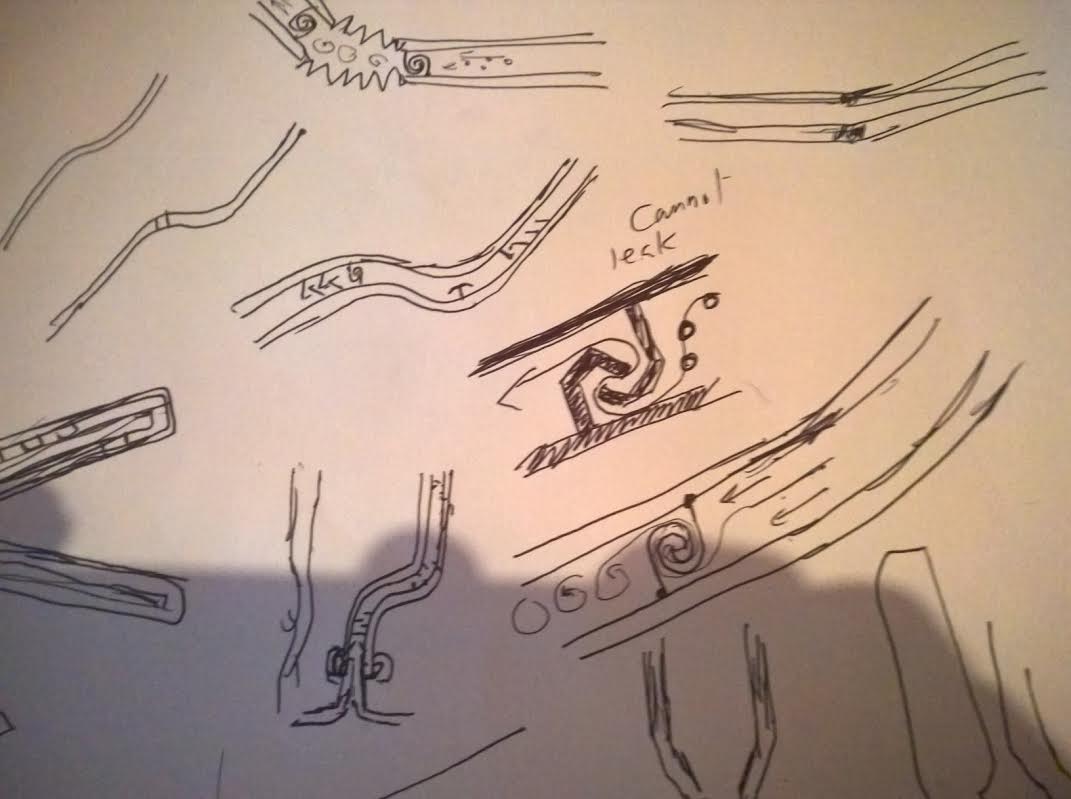 How about some Occam's razor?

I've have just started reading a book called "Pushing gravity" which goes back to the theories and ideas of Le Sage, which Newton himself liked.

Le Sage suggested that minute particles travel in all directions at very high speeds and when they impact matter they cause 2 bodies A and B to accelerate towards each other because A shadows some of the rain of particles (or waves/aether/whatever) travelling from A to B (and vice-versa), resulting in a net total push of B towards A (and vice-versa).

Area is in this sense meant by the sum of individual atoms/electrons, i.e. mass.

So for your 2d world, if an object halves the distance, its new "shadow area" will be 2x, not 4x like in 3d. Does that work for you?

Change 1.6 to any constant between 1 and 2. Then, make the gravitational "constant" not a constant, depending on distance. The precise expression of G(r) can be adjusted for your universe's specific needs.

I don't know if this will yield a stable orbit. Maybe with some adjusting of the geometry of the universe... See Non-euclidean geometry for some ideas.

Not the answer you're looking for? Browse other questions tagged reality-check physics gravity alternate-reality 2d or ask your own question.

4
How would gravity work in this alternate universe?