I have a setting where technically sophisticated but underequipped humans are resorting to improvised chemical weapons in a war against Lovecraftian monsters, and am trying to figure out the exact mechanics of using a jar of concentrated dioxin as a chemical bomb. So...

If so, from what height would you need to drop such a jar for it to reach terminal velocity?

The old "hard as concrete" saying has much to do with the fact that water resists compression very well. Thus, if the jar hits the water (at less than terminal velocity, even if the glass is quite thick), the water will not compress enough to provide much cushion, so the glass will shatter. At slower speeds, the effects of breaking surface tension (think: water "getting out of the way" or making a splash) would allow the jar to splash into the water.

Unfortunately, your specification of "liquid dioxin" creates a slight problem:

I don't know which dioxin you are referring to, but TCDD is a commonly known one, so I'll go with that.

TCDD is solid at room temperature, and unfortunately not very soluble in water ($0.2 \mu g / L $), which only allows for $4\mu g$ of dioxin in your 20L delivery container, which probably wouldn't kill anyone by the time it's further diluted in the target body of water. (Lethal dose in rodents varies between $1-1000 \mu g/kg$).

To wit, it would probably take in excess of twenty such canisters to kill a single human-mass monster and that's if they somehow managed to ingest all of the toxin from every jar, which is very, very unlikely given the delivery method. Clearly, they'll need the concentrated solid.

If you do have TCDD in a concentrated solid form, I'd suggest (er, in your fictional world!) to simply drop that. When it hits the water it will slowly dissolve, but would have a better chance of staying concentrated enough to do some damage.

TCDD is a crystalline solid. I've never seen it (and hope I never do!) but it would probably lend itself to small-ish crystals, granules, or ground up powder (the finer the grind, the more readily it would dissolve). To continue with the "jar" delivery method, I'd fill up the 20L jar with the powder, and then flood it with water. The water won't dissolve more than a few micrograms of the powder (see above), but it will give your package more heft and make it more likely to shatter the glass on impact.

If you include an air gap so the liquid/solid combination can move inside the jar, you can achieve a "water hammer" effect to help break the glass: 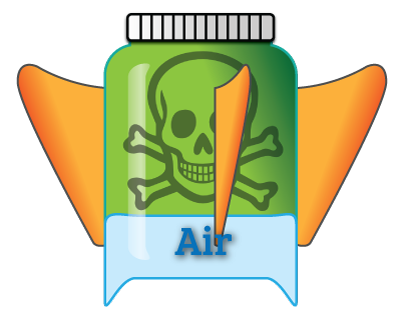 The idea is that in between the top (poison) layer and the air (better yet, partial vacuum) compartment at the bottom, there's a relatively thin barrier that will break easily when the jar hits the water, which will cause the poison to accelerate and rapidly hammer the bell at the bottom and blow it out. The fins of course keep the vessel on a stable orientation during free-fall.

The concave bell shape on the bottom might help transmit more of the shock to the glass, but it's certainly not essential. You could use ordinarily-shaped jars.

While you don't need this kind of design, it's still simple, and it would improve the reliability of your characters' poison bombs and/or allow them to drop them from lower heights.

With the above design, and 20kg of accelerating poison to help break the jar, a drop of a few meters on relatively calm water would suffice. Thus, your characters will want to handle them carefully, which would include careful packaging and carrying protocols (not to mention hazard pay...).

At drop distances of even tens of meters (30 feet), the jar will be moving fast enough to virtually guarantee the destruction of the vessel.

Bonus: How about explosives?

For even greater reliability (or use in cases where free-fall delivery may be unavailable), simply include a low-yield "slow" explosive (modern "smokeless" gunpowder would be sufficient, since it contains its own oxidizer). It needs only break the glass, so a tiny amount will suffice (or just use a bullet, if your characters have modern ammunition). Almost any kind of detonation trigger will do (contact, altitude, even a timer/fuse), since you don't care when it blows up, as long as the good guys aren't holding it at the time, right?

Actually I don't think you need to get it to terminal velocity, just put some steel ball bearings in the jar, maybe need to have them loosely attached to the different sides, so when the container strikes the water, (at whatever angle) the steel projectiles will slam into the glass shattering it.

Yes, it will probably break especially if it's designed to break on contact with water.

This sounds very similar to egg drop competitions held in science programs all over the world. The competition is to see who can make a container that will prevent a common chicken egg from breaking when dropped from a high height (usually hundreds of feet). There are various techniques to building a vehicle to preserve the egg...but the egg isn't my point.

This Mythbusters video shows that while hitting pavement hurts way worse than hitting water, a crash landing on water is still lethal. If dropping from 600 ft is enough to break bone, then that's certainly enough energy to shatter glass.

If these would-be god killers decide to make the jar a three inch thick(76.2mm) sphere, they stand a very poor chance of it breaking open. However, if they make it just 1/16 inch (1.58mm) thick in a non-spherical shape, they stand a pretty good chance of breaking open on contact with the water.

If this jar is supposed to be a weapon of mass destruction, then having it shatter on impact is less effective than having it explode some height above the water then disperse the dioxin over a broader area. If the Lovecraftian monster is submerged then a cloud of dioxin in the air is only minimally dangerous unless they come up for air within the dioxin cloud.

well, water is supposedly as hard as concrete when a human at terminal velocity hits it, and i imagine that a glass jar filled with fluid would have a comparable speed, so it makes sense for it to shatter on impact. if there is something moving in the water to disrupt the surface tension, however, there wouldnt really be anything for the water to break against (except the thing moving), so it might not work that great as a direct weapon. can you clarify how they hope to use the jars (are they dropping them directly at swimming eldritch abominations? and what form is the dioxin in?). either way, this probably would not be the most effective way to disperse a chemical weapon; additionally, if you have the means to either accelerate the jar to a high enough speed or get high enough to drop it, than you should probably have some other sources of attack available.

I believe this totally depends on the jar, it's thickness etc.

Think of it this way, you could drop a thick-walled perfume bottle out of a plane and it'd probably be undamaged when it hits water.

On the other hand a very large jar made of paper-thin glass is unlikely to survive the impact.

Height for reaching terminal velocity would vary based on the density of the substance inside and the shape of the jar.

4
What would a relativistic kill vehicle hitting the moon look like from earth?
4
Arquebus muzzle velocity, and how to balance it with bows and crossbows
15
Glass arrow heads
9
Humanoid that has a low terminal velocity
13
Can the Sun lose enough mass that Saturn's current velocity becomes escape velocity?
24
How durable would a person need to be to survive impact at terminal velocity?