Could life have evolved as described by Lamarck's theory of evolution, instead of Darwin's?

As we all know, life as we know it today is caused by the process of natural selection, sometimes referred to as survival of the fittest, as proposed by Darwin. Essentially, the organisms better at surviving would be more likely to pass on their genes.

Before Darwinism became widely accepted, Lamarck proposed a similar theory. The following picture describes it perfectly (with the example of a giraffe): 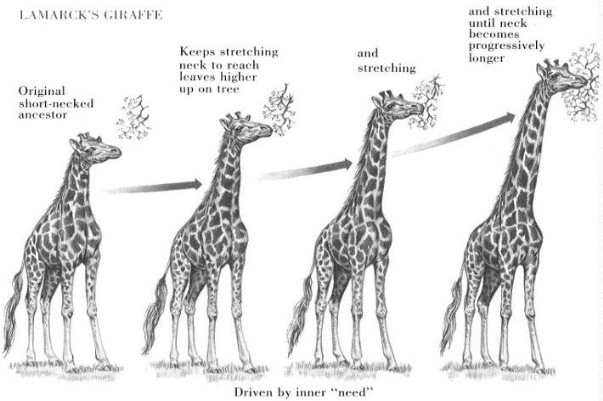 The difference between his and Darwin's theory is that he believed that a traits acquired in the lifetime can be passed on.

Could life as we know it arise if Lamarck's theory was correct rather than Darwin's?

The giraffe neck is a commonly given example, but there are lots of features of Lamarckian evolution that exclude it from being a possible explanation of the origin of species.

"Inheritance of acquired traits". One version of Lamarckian evolution imagines a blacksmith. He uses his arm muscles, which respond by growing larger. His children are then born with naturally larger muscles... However many of my acquired traits are damage. For example I have sun damaged skin, if this trait were passed on, my descendents would have more damaged skin from birth. For Lamarckian evolution to a possible, there would need to be a mechanism for distinguishing "good" acquired traits from harmful ones

"Striving". A proposed solution to this is that only traits which are acquired through effort or choice are transmitted down the generations. While it is reasonable to imagine a Giraffe striving to reach leaves, it is not a solution for how sight could evolve (trying to see doesn't improve your sight) nor can it explain evolution in plants or simple animals (a plant doesn't strive to photosynthisise)

"Reductionism". The mechanism of Lamarckism would be hopelessly complex. It would require the animal to have a mechanism to analyse its current state, and then rewrite its DNA in order to reproduce.

There is evidence that there is non-genomic transmission from mother to child through the womb, this cannot explain the origin of species.

So summed up, evolving is now instead of: "sorting (live/die) of a random variation" consists of the body adjusting to behaviour caused by will, caused by a "need". That may even to some extent be correct, as training your body is essentially to change its form through new behaviour.

A problem then arises: "How is this new form transferred to the next generation?" This is at least partly possible through gene activation. That is, what genes are active and affects the shape of the giraffe is not directly possible to read out from the DNA, the "source code". DNA is packed together, and the way is it packed affects how active different genes are. The proteins packing the DNA is of course also coded in it, but exactly what packaging-proteins that are active are affected by... the packaging. Recursively, this means that not all information in the system is recoverable from the base pairs alone. (mutations and actual changes in the DNA is necessary in the long run though. Darwin's theory is a must then, as Lamarck does not cover the concept)

As always, I love world building questions which try to explore some novel approach to life, only to find that nature has already found a way. It's marvelous what nature can do.

Lamarkian evolution actually does happen, to some degree. While much of our genetic evolution is very Darwinian, there are plenty of example of extended phenotypes which get inherited from the mother in utero. Many traits of a child find their origins in mother's choices while pregnant. Your baby's sense of taste, for example, gets partially developed from the mother's diet. Live in a part of the world where eating garlic is essential for life? Your child will actually pick up a taste for garlic from the amniotic fluid it lives in, long before it ever sees the bulbous herb.

Perhaps a love of garlic isn't exactly a life skill, but other traits that operate this way are very valuable. For instance, it has been found that a baby reacts to mother's stress hormones in utero. If mommy has found that the only way to cope with the harshness of life is through the stress hormones like cortisol (which tune the body to face the stress), the baby will develop to generate more cortisol in stressful situations and decrease cortisol slower after the stress is removed. This has actually been measured, correlating maternal cortisol levels during pregnancy to cortisol levels produced during the baby's first blood draw.

Sound harsh? Maybe not. One of the known effects of cortisol is a decreased immune system, and worse allergic reactions. These sound useless right? Maybe not. Biochemically, it suppresses outputs of Th1 helper T cells, while activating Th2 cells to encourage them to produce more output. As it turns out, Th1 cells are primarily involved in fighting bacterial and viral infections. Th2 is more involved with our defense against extracellular parasites like worms. Now we don't have many worms in our modern 1st world life, so we don't benefit much from Th2 upregulation. However, if you are living in a part of the world where worms and other parasites are a regular part of life, this response is very useful.

So we have an example of Lamarkian evolution, at least at an extended phenotype level. If mother deals with a lot of worms in her life, her cortisol levels will tend to be higher. The child will then develop accordingly, and be born more ready to deal with the infectious world around them than they would have been if mom didn't stress her body. And likewise, if the baby is a girl, it is likely that her stress levels will be passed to the next generation.

My answer is short and simple, because this question doesn't really need a long answer. Your question is like asking, if Prometheus really created humanity, could humanity exist? The answer is obviously yes. These theories were designed to explain why the world is the way it is. If it is proven correct, then the world isn't suddenly and irrevocably changed, it just remains the way it is.

49
Could an organism have evolved to kill its prey by shouting at it?
3
What is an alternative way "plants" could have evolved to collect energy from the sun besides photosynthesis?