Are there realistic circumstances that a planet would be accelerated (either artificially or naturally) to the speed at which relic radiation becomes so blue-shifted that the planet is illuminated so as if it were in a habitable zone?

I also wonder the following:

I wouldn't know what would accelerate the planet this much without destroying it as a side-effect. Not to speak of any life on it. But I can say that if it manages to, I expect some serious side-effects.

For the record: high-relativistic speeds are pretty crazy. If I neglected or misinterpreted one of their effects, well, this is just a best shot without spending too much time, since nobody else seems to give this a serious try.

When moving in the vastness of space, the CMB (cosmic microwave background) actually makes up the majority of incoming radiation. This site has a nice plot and some explanation on that. So, at least in terms of energy, starlight won't be the major factor there.

Now, as to a habitat, I think this will go bad if I understand black-body radiation correctly. I will ignore incoming particles for now and tackle a basic problem of the question: both the CMB and our sun are following Planck's black-body radiation. This means that, if we want to get the spectrum that the sun emits, we have to use a black-body source corresponding to the same temperature, or else the shorter wavelengths' intensities will drop significantly, giving us less visible light, and more infrared and beyond. Red- or blue-shifting black body radiation doesn't change its properties, only its temperature. So, to get the kind of light we have, a large portion of the forward-facing sky (before aberration) would radiate with the intensity of the sun!

The sun has a solid angle of just $7 \cdot 10^{-5}$ as seen from Earth. If the equivalent of something on the scale of a quarter of the sky is a black body at solar temperature, this giant sun would burn the planet. This rules out having light as on Earth, we'll have to go to longer wavelengths.

To make the power of our incoming CMB equal to that of the sun on Earth, we can equate the incoming intensity times solid angle of both of them. (Again, I am assuming aberration just compresses the light into one direction, and work with the undistorted sky for now.) This way, we can calculate the black-body temperature the CMB would have to replace the sun in heat output. Using the Stefan-Boltzmann law for the scaling of power with black-body temperature, we get $T^4 \pi = T_\odot^4 A_\odot$, where $T$ is the desired temperature, $T_\odot$ the sun's temperature, $A_\odot$ solid angle, and the $\pi$ is the equivalent of a quarter of the sky.

(The value for the corresponding effectively illuminated sky is just a rough guess, but should be good enough. See the comment by verlaner. Note that the visible image of the sky may be heavily distorted due to the aberration of light, bundling the incoming light into the forward direction.)

That's merely about $125^{\circ}\text{C}$. This black-body temperature is far too low to give the desired illumination, but already heats the planet at the full power the sun would yield.

I have the feeling that the idea to blue shift the CMB into the sun's spectrum is not healthy in general. Let's say the CMB magically doesn't harm us, but we need it to have the solar spectrum, to see just how much velocity this is.

Let's calculate the kinetic energy per mass at this velocity.

So, severe time-dilation aside, obstacles are bad. One gram of infalling mass would have a yield of $90\text{PJ}$, which is roughly 1500 Hiroshima bombs. I guess it's safe to say that dust and meteorites will be a much bigger threat for this planet. Also, if the planet is quickly slowed down due to collisions, nobody would want to live on it. ;)

However, outer space -- outside of galaxies -- has densities below one atom per cubic meter. This strips the six orders of magnitude we need to get it below solar output. I admit I don't have any idea whether this kind of bombardment might deal damage to atmosphere or habitat directly, even if its absolute power isn't high.

Not that any of that is relevant compared to the black-body radiation argument above. All in all, my estimate is that this will not end well, and probably quickly too.

No warranty on correctness. Please comment or edit if you find a mistake.

I'm not going to calculate at what speed the planet would have to move in order for this effect to happen. My guess is that it would have to go pretty darn fast for there to be a substantial difference, but I don't have much to back that up, other than (sometimes faulty) intuition.

Could a planet be accelerated to some incredible speed? Absolutely. Just put it near the supermassive black hole, Sagittarius A*, in the center of our galaxy. I have to add in a picture (from Wikipedia) to illustrate just how much stars are effected near it: 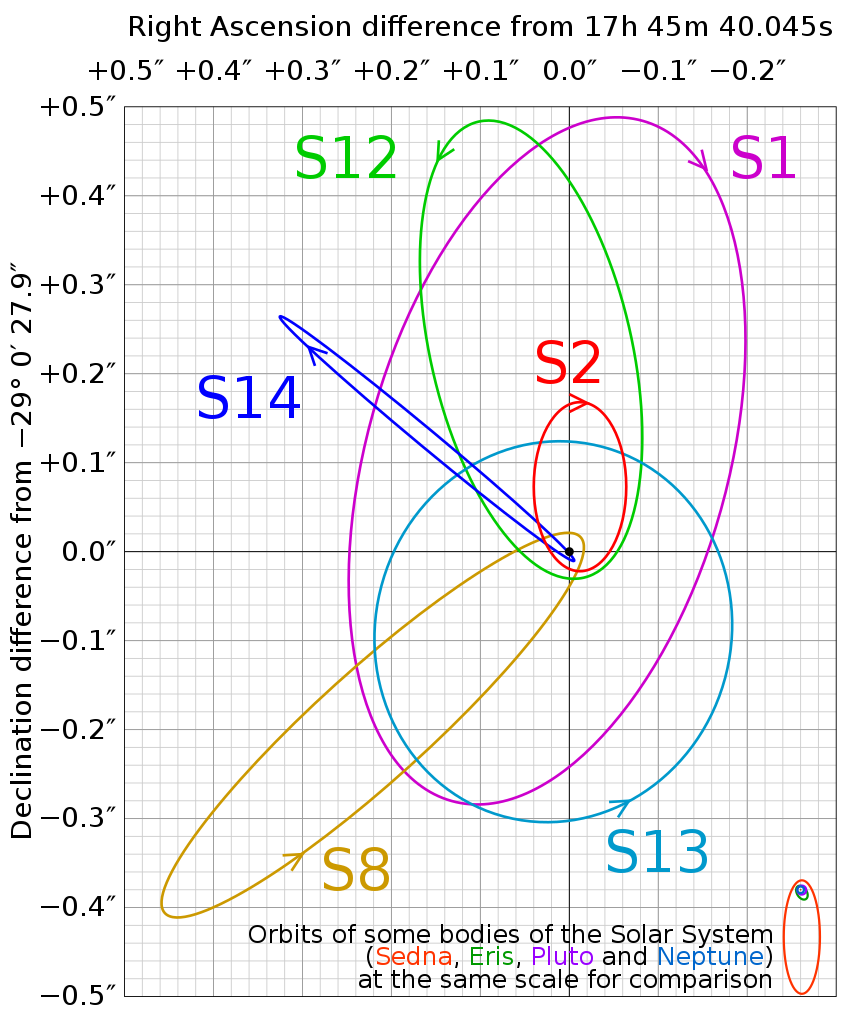 It is thought that intergalactic stars are chucked out of their home galaxies by interactions with a supermassive black hole. Here's a graphic (from Wikipedia) that illustrates this:

I apologize if the graphic take a while to load; it took about 30 seconds on my computer.

These stars are known as hypervelocity stars. They can travel at speeds of about 1,000 km/s - not nearly enough (if Vandroiy's calculations are correct) for this kind of speed. However, I wouldn't me surprised if a galaxy with multiple SMBs (perhaps the result of a few galaxy mergers) could get stars moving a lot faster than that. If this can happen to stars, it can sure happen to planets (note: rogue planets do not necessarily get removed from their star in this fashion). Besides, planets are a lot less massive than stars (many orders of magnitude) and so could possible get boosts many orders of magnitude higher.

Will such planet be in constant danger of impact by small bodies who at these speeds can be a danger to the whole planet's population?

Most likely not. Remember this quote from Douglas Adams:

"Space," it says, "is big. Really big. You just won't believe how vastly, hugely, mindbogglingly big it is. I mean, you may think it's a long way down the road to the chemist's, but that's just peanuts to space, listen..."

There aren't a lot of dense areas of celestial bodies. Remember, the nearest star system is the Alpha Centauri system - and that's 4 light-years away! I'd imagine that collisions would be extremely unlikely, although there could be more activity near the galactic center. However, it will probably interact a little with the interstellar medium, though not a serious amount.

Will not such planet quickly slow down due to cosmic medium?

Possibly - and probably a little bit. There will certainly be interactions with either the ISM or the IGM, which could slow it down a little. If the planet passes through higher-density regions of space (nebulae, gas clouds, etc.), then this will become a bigger issue. Which brings us to our last section.

What will happen if such planet impacts an intergalactic gas cloud or enters a galaxy?

Cool. I'm not sure what would happen here because I don't know if these exist in non-negligible numbers. I can analyze an interstellar cloud, if you want.

Interstellar clouds are regions of space filled with lots of gas and dust. They contain some dense ISM, as well as a lot of hydrogen. Some, such as giant molecular clouds, are the birthplaces of stars. They have a heck of a lot of hydrogen, in its molecular form (H2, I believe, although I'm not positive). How dense are these clouds? Some are very dense. From Wikipedia,

Wow. That's pretty dense. Could that cause some problems for our high-velocity planet? Perhaps. But there could also be some upsides. After all, stars are being born nearby. And gravitational capture is always a possibility. . .

Math indicates that the planet would need to be traveling at least 120 km/s relative to a stationary observer (for reference, that's about 15 times faster than the Earth moves around the sun) up to a maximum of around 210 km/s (26 times). I.e. about 0.04% to 0.07% the speed of light.

Odds are, such a planet would not be "stable" (astronomically speaking) long enough to support life. But...

My guess is that it's unrealistic and could never happen, but it's significantly more plausible than interstellar space flight (FTL travel) and no one has a problem with that. Rational explanation: the planet was flung off from a close-pass with a black hole, sending it into the deep voids of space, stripped from its parent star (stars do orbit black holes at these velocities, so a hyperbolic trajectory could fling off a small body fast enough).

Not the answer you're looking for? Browse other questions tagged science-based planets environment climate astronomy or ask your own question.

2
What happens when a tidally-locked planet breaks out of the synchronous rotation?
9
No sunlight, just high-energy radiation?
13
Blue Cryovolcanic Planet
25
Making a Planet Seem Uninhabitable
5
Radiation from binary star systems and how that would affect a planet orbiting both stars
8
Fusion thrusters on a planet. Problems with temperature and radiation!
28
A planet illuminated by a black hole?
13
Rogue Planet Illuminated by Galactic Centre