Is it possible for a planet to have very little visible-light energy and receive enough energy to support life from ionising radiation?
Dim light, including starlight and ionized-air glow is acceptable.

A planet in orbit around a binary star-black hole system:
Pros:

A rogue planet in a galaxy containing a Quasar
Pros:

The planet could be covered in a thick atmosphere that blocks visible light but not high-energy radiation.

My question is; what scenario will maximize high-energy radiation but minimize visible light?

A related question is; what kind of life can evolve on such a planet?

EDIT: Since it seems to be impossible for the sky to be dark but flooded with radiation; what situation maximises the radiation-to-light quotient?

The situation I have in mind now is:

How credible is this scenario?
One of the problems with my scenario is; how long will that setup last?

Most of the physics regarding quasars and pulsars etc has been explained by the people above me. Here I would go with a few quick fact check over the core of the question.

Q1- Is it possible for a pulsar planet (a planet revolving around a fast rotating neutron star) to harbor life?

Pulsar planets would be unlikely to harbour life as we know it, because the high levels of ionizing radiation emitted by the pulsar and the corresponding paucity of visible light. (https://en.wikipedia.org/wiki/Pulsar_planet#History)

Carbon based life, as we know it, relies on proteins for all biological processes. The sudden high energy X-ray beam from the pulsar would totally rip those molecules apart before the first prokaryote ever formed. 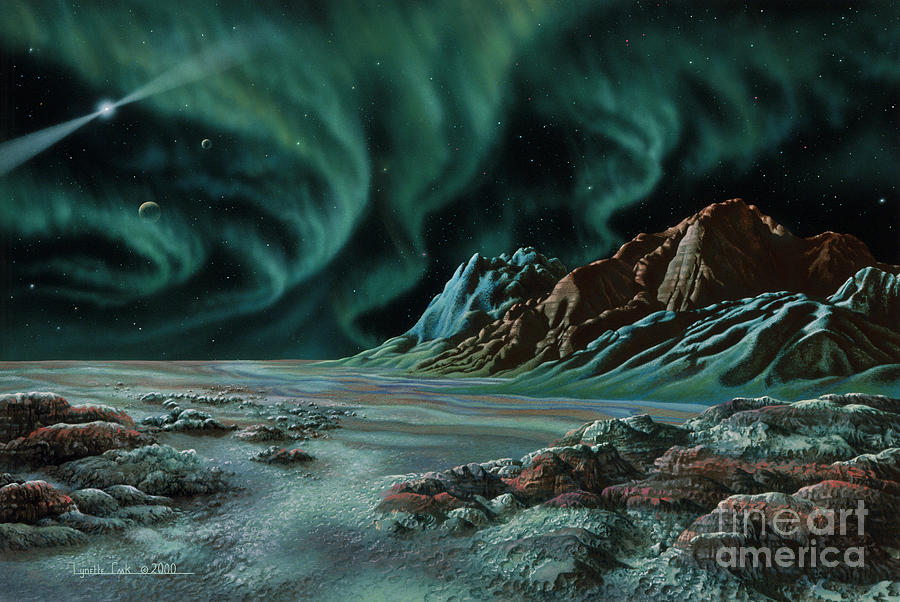 A ghostly, beautiful world with dancing auroras ... and no life ...

Theoretically yes (as this article states). But it would be a primitive type of life (if it carbon based life with metabolism similar to life on Earth) and there would be no complex life on such a planet. 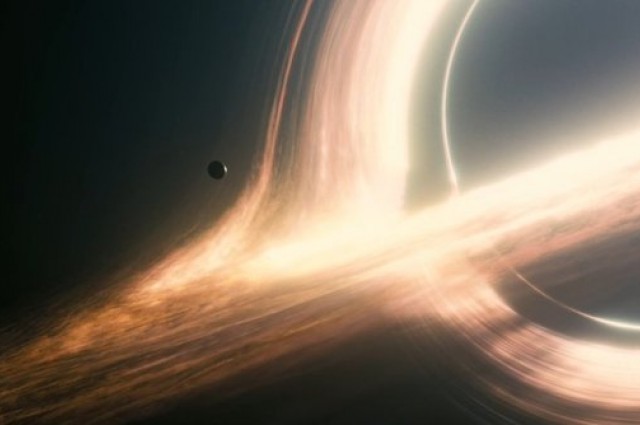 p.s. this would be one of the most horrifying places to live at, in the whole universe ...

Q3- Can there be life on a rogue planet in a galaxy containing a quasar?

According to this article, containing an immensely knowledgeable video, it would depend on how far the planet is from the center of the galaxy/quasar. For example, considering that our solar system is present on the edge of our galaxy, if our galactic center turned into a quasar, its heat and light reaching us would be just 1% of the heat and light which reaches us from the sun. Counting this in perspective, the closer the planet is to the galactic center, the higher amount of heat and light it would receive from the quasar.

However, once again, heat and light alone are not the only determinants of life on a planet. Considering the extremely high energy gamma ray emissions and high energy particle jets emitted from the quasar, a planet which is at a distance to suitably be in the habitable zone of a quasar would probably get a frighteningly high amount of destructive radiation from it, which would destroy any and all life on that planet, reducing it to an apparently very habitable (in the goldillock zone) but in fact completely dead planet. Also, forget any shred of hope that an ozone layer could shield you from such high intensity energy beams. In fact those energy beams are powerful enough to easily destroy any ozone-like absorptive layer around the said planet. 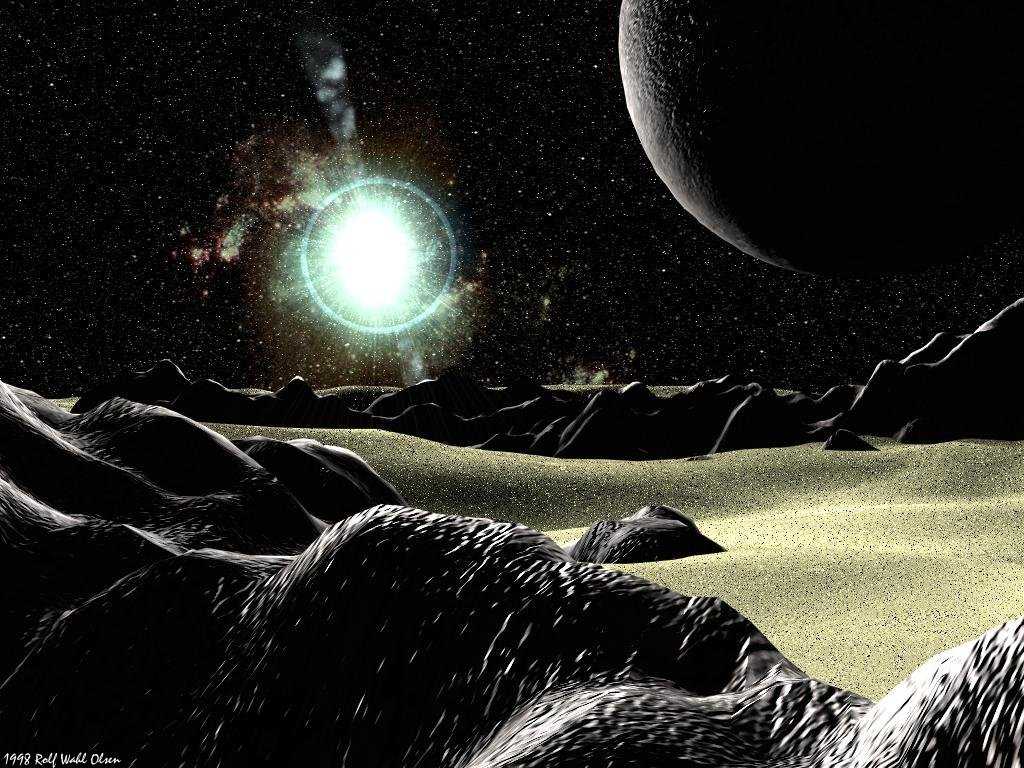 I don't want to live on that planet. Period!

Yes. Black holes can be large enough to anchor entire galaxies - evidence strongly suggests a supermassive black hole at the centre of our own galaxy. Due to the increased mass of the black hole vs, say, a garden variety star, any planets would have to exist beyond the event horizon - which means if your planet is in orbit, it may already be a suitable distance from the black hole to avoid significant radiation.

Further, your planet could have been a rogue planet caught by the gravitational pull of the black hole after its supernova transformation, or a collection of debris from passing comments, meteors or asteroids.

Emissions - are they a problem to life on these planets?

This image shows a beam of xray and visible light being projected over a million lightyears from the pole of a quasar. 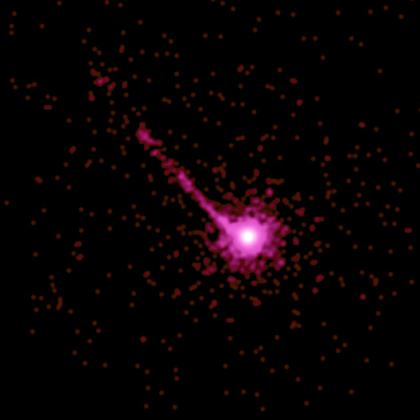 The jet is called an 'astrophysical jet' and contains x-rays as well as particulate matter and plasma, and for it to reach the escape velocity it must be travelling near to the speed of light. This would certainly cause problems for your planet. However, these jets tend to be emitted from the poles of the quasar/black hole, whereas orbiting bodies tend to move around its center of rotation.

X-rays and radiation may still be an issue, but not so much as an all-encompassing blast of planet-shredding plasma.

The main concern with a lack of visible light will come from nutrient systems. The vast majority of life on earth relies on sunlight as the keystone of the foodchain. However, there are places on earth (deep, underwater trenches) which rely on geothermal vents for energy. Plants and plankton there convert the planet's heat which comes boiling up through the water into nutrition, which larger, more complexed life (such as shrimp, crabs and tube worms) turn into energy for themselves.

Assuming the background radiation of your planet is enough to cause genetic mutations, death and cancers, it might be that any form of life on your planet has one, some or all of the below traits:

There are some extremophiles that exist in real life, such as einococcus radiodurans bacterium, which can survive a 15,000 gray dose of radiation, where 10 grays would kill a human and 1,000 grays will kill a cockroach.

More complicated life exists in the form of fungi which can convert radiation into nutrients. From sciencedaily.com:

"Since ionizing radiation is prevalent in outer space, astronauts might be able to rely on fungi as an inexhaustible food source on long missions or for colonizing other planets," says Dr. Ekaterina Dadachova, associate professor of nuclear medicine and microbiology & immunology at Einstein and lead author of the study.

This source of nutrients would be a good option to support larger, more biologically complicated creatures which might live in networks of tunnels shielded from radiation by the density of the rock - making brief trips to the surface for food before returning underground. Again, deep water would have a similar potential for protection.

For further reading, I'd recommend looking into the species and lifecycles that continue to thrive around Chernobyl's reactor core.

TL;DR Yes, it's possible for ecosystems to exist without light and high levels of radiation. Life, uh... finds a way.

The mechanism for radiation release around black holes and similar collapsed stellar remnants like neutron stars more or less preclude the possibility of having a dark sky full of ionizing radiation.

As matter is being pulled into the accretion disc, it is gradually being accelerated around the central object, and interacting with other particles also caught in the accretion disc. As the velocity and density increases, frictional forces heat the matter to higher and higher energies, which is where the problem comes in.

Matter at the outer edge of the accretion disk is fairly loosely gathered and moving relatively slowly, so the outer edge of the disc is going to be relatively cool. As we mover farther in, the amount of energy and density is going to become higher and higher, being re radiated at higher and higher frequencies. This means the disk is actually going to radiate in all frequencies from infrared to hard x-rays and beyond, so regardless of what you do, there will be a very large and bright visible component of energy being released from the disc. 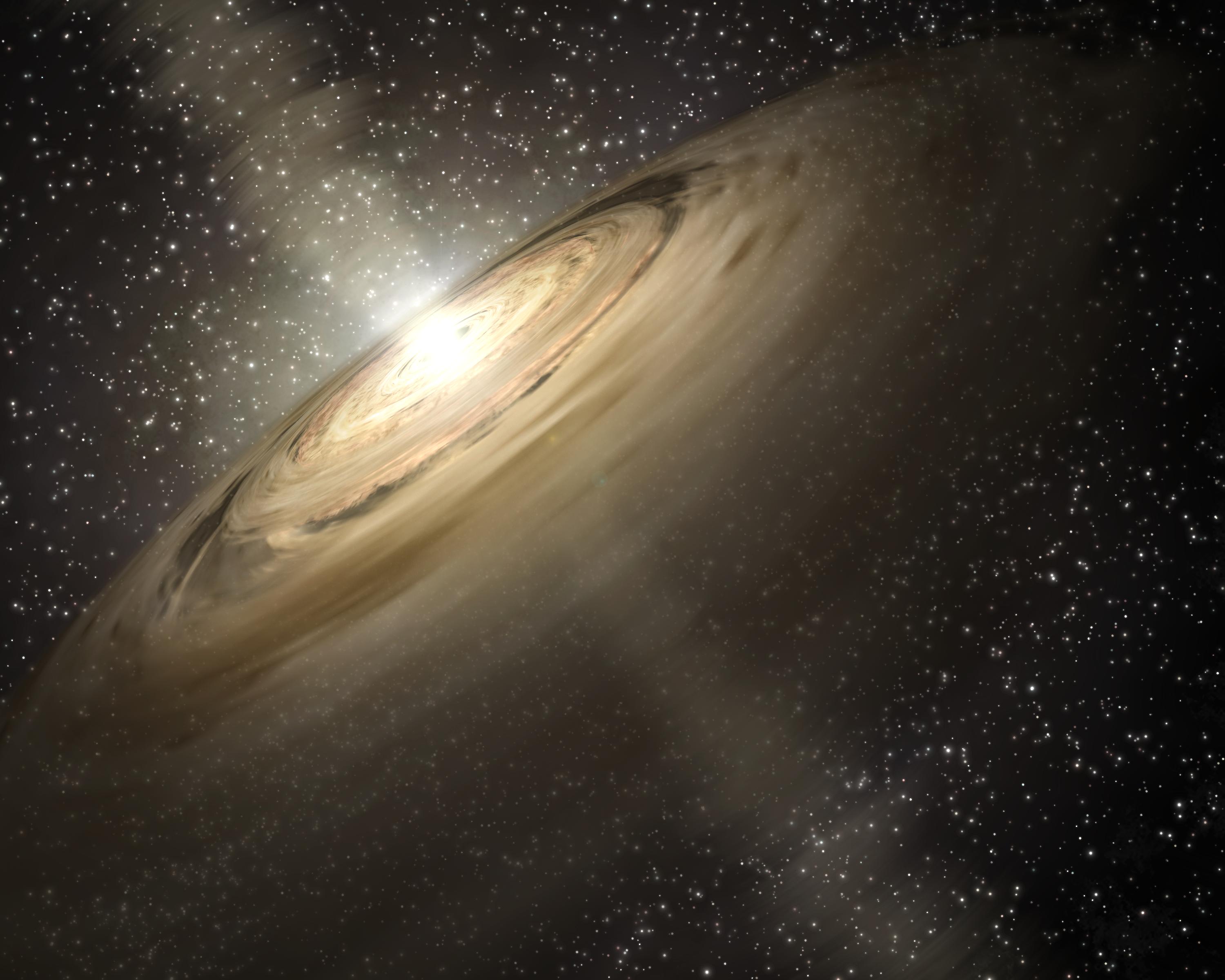 The movie Interstellar includes gravitational effects in their depiction of a black hole: 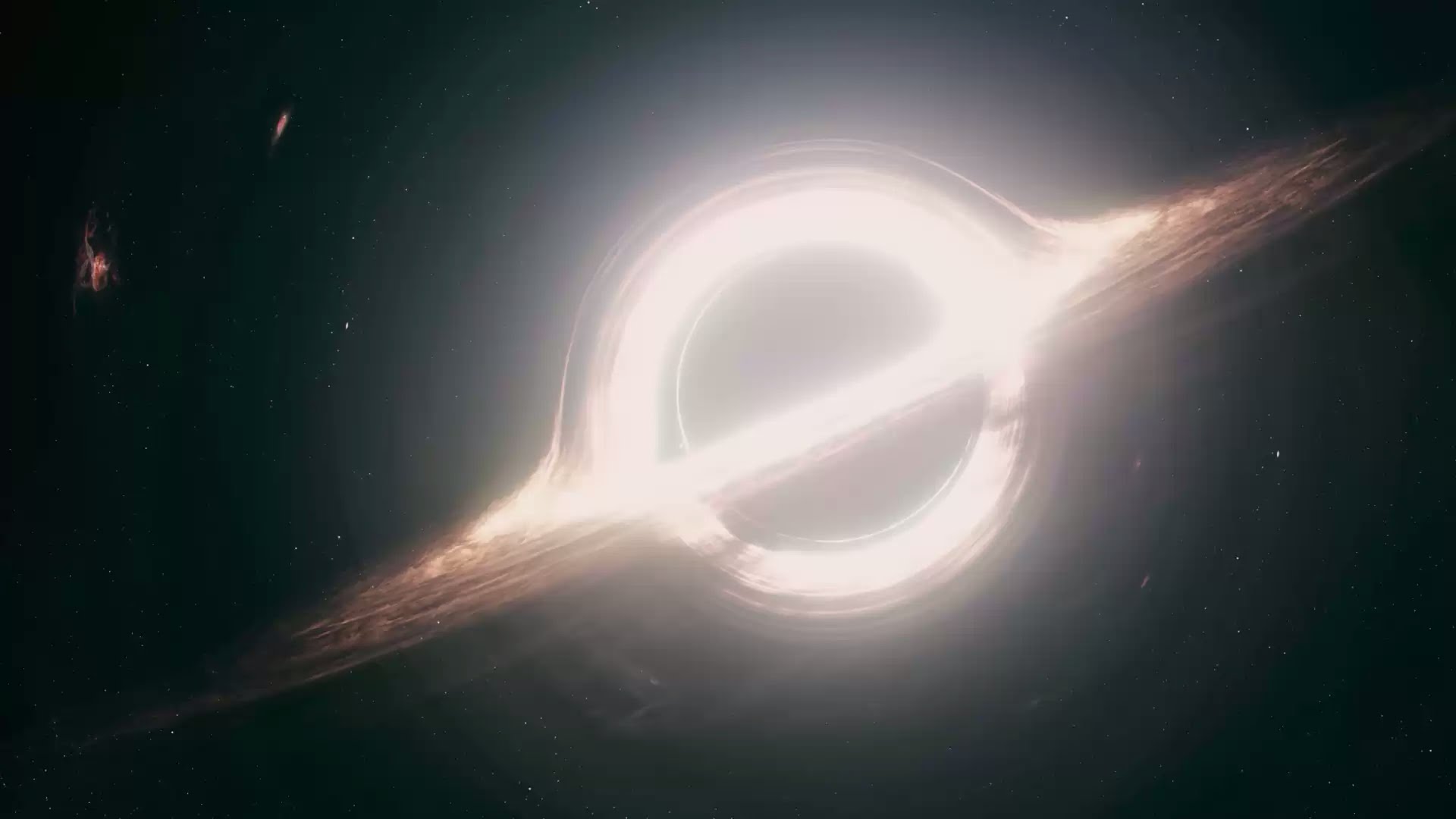 Even from a very great distance the visible component is going to be quite brilliant; quasars are thought to be the central black holes of galaxies in the early stages of formation billions of years ago and are visible across the universe!

If we are considering a supermassive black hole near the centre of a galaxy, it will be dragging entire stars and star clusters around outside the accretion disc. Even if the area around the hole has become "cleared" for some reason, you will have the light of thousands or millions of stars streaming around the central black hole.

Small black holes near the end of their life are thought to emit energy in the form of "Hawking radiation", however since these are virtual particles being emitted from the event horizon (with their virtual partners in falling into the black hole), they will also be emerging at all energies in a random distribution, so the sky will become amazingly bright in the final few hours of the black hole's existence.

So living near a black hole will not be very dark at all....

Possibly an artificial Quantum Singularity, same class of object as a black hole but differently "arranged" could be build such that it captures it's own primary Hawking Radiation and re-emits it at non-visible wave-lengths. The biggest problem you really get into is that if you expose anything to enough hard radiation it will emit light, either through fluorescence, phosphorescence, or incandescence so your dark world is going to have to be right on the knife edge of having enough radiation to be usable but light enough that things don't glow like the sun anyway, and with most compounds there is at least one wave-length that causes one of these effects at relatively low intensity.

For some details on the fictional science of manipulating singularities "Cavitronics" have a look at David Brin's Earth.

Not the answer you're looking for? Browse other questions tagged reality-check planets alternate-worlds energy .

12
Could life evolve in the degenerate era of the universe?
8
Can long-term exposure to high-energy radiation without corresponding visible radiation induce melanism in a species?
6
Is it feasible for an organism to feed off cosmic radiation?
-2
Is there comprehensive problems to this storyline?

3
How can an advanced civilization harvest energy from an x-ray binary?
12
Earth-like planet orbiting neutron star?
5
How might a Kardashev Scale Level II civilization transport energy?
7
Can life be powered by thermal conduction?
6
Is it feasible for an organism to feed off cosmic radiation?
8
Can long-term exposure to high-energy radiation without corresponding visible radiation induce melanism in a species?
9
Could black holes be a better source of energy than stars?
6
How To Make an Earth with 27 Suns Work, Attempt Two: Orbital Stability
6
What skin, hair and eye colors would people living under different stars have?