How life in a neverending war zone would look like?

I’m writing a post-apocalyptic novel, but I have a problem when dealing with daily life in a post-apocalyptic war zone. I know that I might know how civilians or soldiers live in a war zone just by reading the stories of those who survived, but but I have problems because my war zones, as well as the armies that fight are atypical.

The setting takes place in buffer zones called "Protected Areas". These zones have been established after World War III broke. The war was not fought with nuclear weapons, but mankind saw the use of chemical and biological WMDs that have made a much of the planet uninhabitable. The remaining world governments decided to stop using these weapons, and, in order to make the enemy territory conquered economically advantageous, created the Protected Areas, buffer zones between the countries at war, where all the soldiers would be deployed. What's the problem in these zones?

So, even assuming that there is a minority of deserters guys, how the life for all those young people, abandoned by their own countries, who fight every day to steal a few meters from the enemy, would look like?

Although the two answers given me so far have helped me a lot in defining the setting, the question is different: how is daily life within these areas for soldiers who live there? Keep in mind this.

I don't know if I would call this post-apocalyptic. "Post" implies the apocalypse is over. It sounds like your apocalypse is just getting started. What a dreadful world to live in.

The good news is, we know children survive. Why? Well, first off you mentioned that some actually spend enough time in the warzone to be freed from service, to rejoin the world as a civilian. In fact, we know a lot of them do. Why? Because they have babies. Assuming the horrid life you say for civilians, I doubt women who are in constant pregnancy and labor live past 35, so realistically they can only have perhaps 7 or 8 children. This means, by definition, at least 25% of the women need to survive their service, at a bare minimum.

We also know the children survive, because this is not the first time children have been put into warfare: 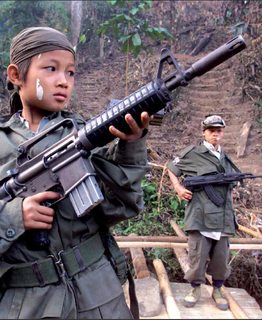 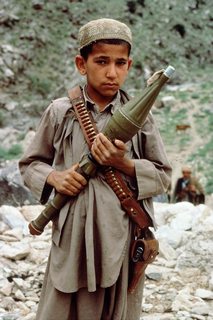 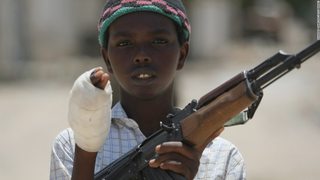 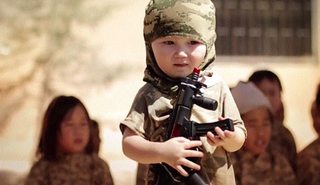 Okay, that's probably just about the single most depressing Google image search I've ever done. I'll try to stick to fiction from here on out

Children of the age 12-20 who have seen war are typically no longer considered children. They are young adults. A child on the battlefield does not live long. They fight with the ferocity of adults, and die just like adults.

So we know a bit more about this world. We know they enter service at 12, life expectancy of 15, so I'd peg the line between enlisted and officer at roughly 15. There may not be an actual line between the enlisted and the officers, but there will be some sort of recognition that maybe we should listen to the guys who lived longer than average. You said there are some that are in their early twenties, which means one may find themselves responsible for other human lives for about eight years. Yeah. Definitely not children, they're not children at all.

Now I like to believe the human mind is pliant. You can't stick something in there that it can't uproot. I've seen grown men check themselves into the VA and gain control over their PTSD, so if those grown men can rise to that challenge, a bunch of flexible-minded children certainly can. While you would definitely be sent to the battlefield with glorious indoctrination of "fight valiantly, die gloriously," that would erode quickly as the gunfire cackles over your head. You'd start to realize that maybe skipping the second half of that indoctrination phase is in your best interest.

I think the key to society in the Protected Area is in the officers who understand a fundamental tenant of warfare: you do not have to win. All you have to do is not lose, and continue not losing until the other side either trips up, or decides it isn't worth the fight. The indoctrination would desperately try to keep this secret from them, but I don't see how young men and women can send their brothers and sisters to die for years on end and none of them figure out that maybe simply not losing is enough. Especially since losing means you don't have enough birthing population to keep up the war.

I find this important because it suggests that you have the potential for wise leaders on the battlefield, even among childre-- I mean young adults. This is where I think you would see some fracturing in the states' plans. The wisest of their young leaders may decide that the game needs to change. They may start changing the strategy, to permit a different sort of life. You would start seeing large contingents learning that they don't need to fight. What's to stop them? All they have to do is be good enough warriors that the other side would choose not to engage them. Learning not to die gloriously is a powerful lesson.

Oh, get your hands down. Do not salute me. There are goddamn snipers all around this area who'd love to grease an officer. I'm Lieutenant Dan Taylor. Welcome to Fort Platoon.

Fictional warriors are much easier to look at than the real ones. And sometimes they even show how the wise leader can learn a thing or two about not dying from his men.

Of course, the states would respond, but the only response they can give is to cut supplies to the children, in hopes of forcing them to fight in some twisted parody of the Hunger Games. But, like in the Games, this opens a chink in the state's armor. Something is getting out of the Protected Area: information. The states cannot prevent such warriors from changing strategies unless they are observing them. There is now a communication channel open between the wise warriors and the state leadership. 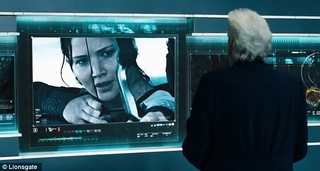 What happens next depends on what sort of story you want to write.

Cort Ammon's answer covers most of the salient points, so I will suggest the real key to the story is what is happening outside of the combat zones.

There must be some sort of actual objective to be fighting for, otherwise the various polities will be hoarding resources to protect themselves and try to recover. Whatever is "out there" is obviously so valuable that it is worth expending manpower and resources to achieve. This will be the driving purpose of all the various sides in the war, and colour all their actions and decision making. Please note this does not mean the objectives are "rational" in the sense that you or I think of as "rational". No one watching the news about the fighting in Syria or against ISIS would conclude the goals of most of the various parties in the conflict are "rational" outside of "don't be conquered by the other guy".

What a lot of people fail to recognize is much of the fighting in that region is driven by religious and ethnic hatreds: Shia and Sunni radicals are fighting to exterminate the apostate "other" sect, and woe betide any Christians, Jews, Sufis, Zoroastrians etc. in the way. Similarly, being Kurdish, Yazidi, Persian, Arab, Assyrian etc. could lead to a very unpleasant experience if you are in the way of one or more of the various forces fighting in the region.

So much of what is going on outside of the combat zones is a never ending propaganda battle to indoctrinate the forces and population with hatred of "the other". Only if "the other" is considered such an existential threat to the society and culture will everyone be willing to go all out in order to defeat them.

The other thing which will take place outside the combat zones will be study of what is going on inside the combat zones and operational research to provide whatever edge that can be given to the fighting forces inside. Throwing away waves of children in human wave attacks may be very simplistic, but in the real world only can achieve limited success if it is backed up by some sort of "real" military force to exploit any gains made. During the Iran Iraq war of the 1980's, Iranians routinely used human wave attacks by child soldiers to clear minefields and obstacles, but made little headway against the Iraqis since the Iranian Army had been gutted by the Revolution and few professional officers or even working equipment was available to exploit these breaches. (Perhaps fortunately for the Iranians, the Iraqis were equally hamstrung by the tight political control exerted over the Iraqi officer corps by the Ba'ath Socialist Party).

Other polities will certainly explore other ways to make their forces more effective in this very Darwinian environment, and we have seen a lot in the real world, everything from various forms of insurgencies, use of remote weapons like mines and IED's, infiltration tactics and developing Special Operations Forces to find and exploit weak points and strategic targets. You can't discount the importance of logistics either; whoever can find better ways to supply forces in the combat zone will gain a terrific advantage.

What is the tech level in the post apocalyptic world?
Children have less muscle mass and so are ineffective with melee weapons and can't carry much armor. If modern weapons are available they are much more dangerous, but then their use of limited ammunition and firearms is another problem.

In the first case adults would be much better fighters. In the second there would have to be a major industrial complex backing up the army, or constant raids and ammunition shortages.

Why are they fighting? Is it just self defense or is there a recourse they are all fighting over. If the first your exiles could buy peace by not attacking their neighbors. If the second they will have to raid and fight against the others.

Why hasn't someone won? Perpetual warfare is very rare, its hard to keep a war going over a hundred years, because in war victories can cascade. Winning one battle destroys enemy troops and makes it more likely that you will win the next battle. These effects tend to cascade till one side wins easily. Long wars usually occur when there is a massive advantage to being a defender, when you lose a battle you retreat to your castles and use its massive advantage to rebuild your forces. You may want to flesh out the defenses of your protected areas to serve this purpose.

Not the answer you're looking for? Browse other questions tagged reality-check society warfare post-apocalypse daily-life or ask your own question.