Is it possible for a skelecopter to fly?

Some necromancers prefer skeletons over undead (have a certain style to them, they don't smell, there's less moaning and grunting). But at the end of the day, they're still walking skeletons. Boring! So I'm trying to do something fun with them: turn them into skeletal helicopters: skelecopters!

Note that the end result needs not to look 100% like a human skeleton, but it cannot have any objects foreign to its body included in its design. Also, its final shape is not important (traditional helicopter, tandem rotor or an Unidentified Flying Skeleton are all good).

So is it possible? Can a reanimated skeleton become a skelecopter and menace its enemies from the sky once more?

The forces are not all that bad, but the speeds you have to reach to achieve those forces are pretty high.

I could not find a reputable source for the mass of a skeleton, but I did find one suggestion that a skeleton is 30-40% of your bodyweight. Thus, for an 80kg human, the skeleton is roughly $24kg$, give or take. This means, to counteract gravity, you'll need $24kg\cdot9.8\frac{m}{s^2}=235N$ of force. Now I'm going to make a handwavey claim and suggest that hands are the only part that matters (har har). Why? Because the velocity each part travels through the air matters greatly. The closer you are to the core, the less lift you can actually get at any revolution rate. Also, hands are nice and big compared to arm bones, so between their size and position, I expect them to account for a lot of the lift.

Wow, that's fast. Even if we take away some of the fudge factors, you're still talking about skeletons spinning around at over 2000rpm. We typically like cast steel for those speeds, not bone.

The natural solution to that would be to give them flippers. If they held a flat piece of material in each hand to increase its surface area, they could rapidly cut down on those velocity requirements. However, just the raw area of bones won't cut it.

As for the tail rotor, if you did get a skeleton in the air, you would definitely need it. Netwon's law: every action has an equal and opposite reaction. Unless your magic is breaking the laws of physics, the torque to spin the spine, ribcage, and arms will have to be matched by a torque in the pelvis and legs. This is just like what happens in a real helicopter. The blades are providing torque, and the body of the helicopter tries to go the opposite direction.

But what if the legs did spin in the opposite direction? What if the arms spun one way, and the legs spun the other: 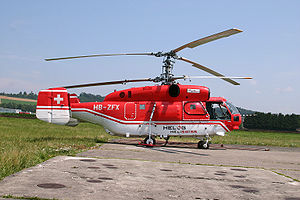 We actually do make helicopters which have counterrotating blades. This typically eliminates the need for a tail rotor. It also double the lift you can provide at any given rpm, because you have twice as many limbs in the wind.

So what happens if we take this to an extreme? Bone can withstand roughly 120MPa of tension force before it pulls apart. Let's say the arms and legs account for roughly a third of the total mass of the skeleton, leaving each limb at an average of $2kg$. The femur, at its smallest point is $3.6\cdot10^{–4}m^2$. This means the femur will shatter at roughly $43kN$. If we're spinning to make this happen, most of that force comes from the centripetal force, $F=\frac{mv^2}{r}$, so lets find out how fast we can actually be traveling. $v=\sqrt{\frac{Fr}{m}} = 146\frac{m}{s}$

Well I'll be a monkey's uncle. Remember how we needed $252m/s$ using just our hands? Well now we have twice as many limbs, so we need half that speed: $126m/s$. That's under the tensile strength of the femur! I'm only considering the lift of the hands and feet in this. If we add in the lift of the arm and leg bones, I bet we can build in some safety margin (which is good, because the arm bones are weaker than the femur, so they'll break sooner)!

Now landing is going to be a pest. Your legs are preoccupied. I'll leave that to your mages!

I think that I've actually seen this very thing before! If memory serves, the answer they found was to attach two extra arms to the back of the skeleton, and have those, in turn, spin a "string" of hands to generate lift. Since there are two blades, you can turn and tilt. Also, the extra arms can be used as weapons once it lands while leaving both normal arms free. The only problem is this leaves lots of skeletons without arms, but given how incredibly deadly and efficient the infamous skelecopter is, this likely won't be a problem for long ;)

18
Making skeletons a challenging fight
3
Why would a planet be spinning fast enough to fly apart?
9
If energy is conserved, how much energy do I need to reasonably use skeletons as a tomb defense?
43
How do I keep my remains safe from being summoned as a skeleton?
19
Could this Very Specific Dragon Fly?
14
Could plants generate energy using wind power?
5
Is an organism that is a collection of worms inhabiting a bare skeleton possible?
79
What (modern) weapons could be used to destroy skeletal enemies as completely as possible?
14
How to fight an army of skeletons?