What would getting hit by a micro black hole laser look like?

So your star and/or planet gets hit by the CrushSun. The huge laser looks terrifying, but then you realize that the main weapon is the microblack hole it hit you with.

What does it look like when a star gets sucked up by a micro-black hole? What about a planet?

According to the expected observable effects of a micro black hole as reported by Wikipedia:

It is unlikely that a collision between a microscopic black hole and an object such as a star or a planet would be noticeable. The small radius and high density of the black hole would allow it to pass straight through any object consisting of normal atoms, interacting with only few of its atoms while doing so. It has, however, been suggested that a small black hole (of sufficient mass) passing through the Earth would produce a detectable acoustic or seismic signal.

According to that depiction, you have your damaging elements reversed. The laser does the damage and the micro black hole is just a stage show.

As to whether the micro black hole would consume or even meaningfully impact the star, the answer is no, as answered by Physics SE.

What it "looks" like is interesting. A black hole is invisible by definition, since the escape velocity is greater than the speed of light. The black hole will become visible through two mechanisms:

The "Einstein ring". The powerful gravitational field of a black hole bends light coming near the event horizon, so anyone looking in the direction of a black hole will see a strange "ring" of distortion as the light from distant stars (or the Sun, depending on your relative position) passes around the volume black hole occupies. You might see something like this: 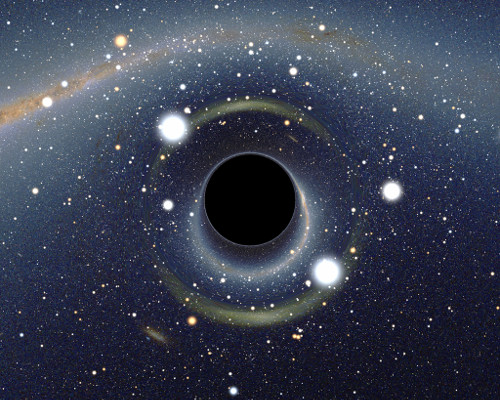 This is actually going to be very difficult to see in the scenario, since the black hole being created is of such a small diameter that the Einstein ring will also be similarly microscopic in size. If you are seeing an Einstein ring the size of the illustrations you are probably far too close to the black hole already

The other thing which makes black holes visible is the accretion disk of in falling matter. In this case you won't see anything because the micro black hole will be starting in relatively clean space without much matter to ingest until it hits the solar atmosphere. The tiny size of the black hole will also limit the actual amount of matter being ingested, so any accretion disc forming as it passes through the solar photosphere will be much too small to notice.

Now the question Is there a way to create a bomb to destroy a star? suggests that there might be another effect. If the in falling black hole can create enough energy deposited in a small volume of the star, it might trigger a chain reaction of fusion in the outer layers of the Sun, creating what is in effect, an artificial type 1 nova.

If that is the case, you will see the CrushSun fire the weapon, followed shortly afterwards by a blinding flare as the star is induced to go nova. After that excitement dies down, the remains of the star will settle for a very long time until the black hole in the centre grows enough to start consuming mass at an appreciable rate (probably centuries). The extra gravitational pull in the centre will cause the star to continue to brighten as heavier elements are pulled towards the core and reach conditions that induce fusion, as well as the energy of the accretion disc forming in the centre of the star itself. The eventual demise of the star will probably be announced as the accretion disc pokes through the surface of the star and stellar material is rapidly flung into space.

If the Earth were hit by a micro-black hole I would think that it would look a lot like a total eclipse, for the first 20 minutes. This is how long the black hole would take to suck in the earths atmosphere and satellites. After that we would all suffocate before we noticed anything else ! As the black hole sucks in material it will expand, and as it expands it will become stronger. During a black holes feeding period it emits x-rays, this radiation would make us all very sick and probably bring us to out knees before we suffocate. When the black hole starts sucking in material from the earth it will do so in a pattern reminiscent of a balloon loosing air.

You imagine a balloon all filled up with air, now imagine that there is something in the center of the balloon, as the air is let out the balloon collapses inward.

A Black hole sucking in material from the earth would distort the earths surface and make it look like this, for a few minutes till everything was gone.

As for your micro-black hole laser weapon ? I think we may be able to answer this with Pi, it would look like an infinitely collapsing sphere were V= 4 thirds pi * Pi/R. Not to shabby.

This is essentially like firing your weapon at another Multiverse, the entire multiverse would take forever to collapse, not to mention the size of all its separate universes. (and we all know how big out universe is)

Not the answer you're looking for? Browse other questions tagged science-based stars black-holes simulated-worlds relativity or ask your own question.

57
Is there a way to create a bomb to destroy a star?
0
How much energy does this sun crushing ship, the CrushSun, use?

4
What would a binary black hole look like from the surface of a planet orbiting that system
5
Black hole launcher
4
Would the gravitational waves from a binary black hole system make a feasible weapon?
0
How much energy does this sun crushing ship, the CrushSun, use?
10
Destroy a Planet inside a black hole?
11
What exactly would happen if a black hole was introduced into the sun?
3
Would it be possible to have a small black hole dissipate as it 'sinks' into the earth?
19
Black hole as a storage device?
4
Is a “Partial” Black-Hole Possible?
4
What size of black hole is the safest?