On a frozen planet with a tower that generates an artificial sun, how tall would the tower have to be to illuminate an area with a 1000 mile diameter? [closed]

Yes this is a fictional worldbuilding brainstorming question. But I'm sure there's a mathematical equation to find the answer. I just don't know what it is. Anyone? Let's assume the planet is the size of Earth.

As @Hohmannfan points out, the curvature of the earth limits the region illuminated by a light source. If we want an area of diameter $d$ to be illuminated, the (planar) angle subtended by this diameter is $\theta=d/r$ (in radians), where $r$ is the radius of the earth. We can draw a four sided shape with vertices at the center of the planet, the top of the tower, and two opposed points on farthest reaches of the illuminated area. If the tower is the shortest it can possibly be, the angles at the vertices at the farthest reaches of the illuminated region are both right angles. Thus, with a little trig, we can calculate that the distance from the center of the earth to the top of the tower is $D=r\sec(\theta/2)=r\sec(d/2r)$. To get the height of the tower above the surface of the planet we simply subtract the planet's radius: $h=D-r=r(\sec(d/2r)-1)$. Plugging in $d=1000$ mi, and $r=3959$ mi, we get $h=35.1$ mi. This is the absolute minimum height of the tower.

Of course, it is quite a bit more complicated than that. The problem is that the light from the tower will hit the farthest reaches of its area of illumination at a very oblique angle, which has very little warming effect. This is why the far north and far south of earth are so cold. We could make up for this by making the artificial sun extremely intense, but this would bake the area directly beneath it so as to make it uninhabitable. The solution is to make the artificial sun more intense, and further above the surface. Since you do not elaborate on what you mean by making the illuminated zone inhabitable, let us suppose that you want the fringes of the region warmed like the latitude $\phi$ on earth. The geometry here is quite complicated, but I come up with $$h=r\sin(d/2r)\cot(\phi-d/2r)-r-r\cos(d/2r).$$ So if you want the area $500$ miles from the tower to be like $45^\circ$ north or south on earth, the tower needs to be $626$ miles high. This means that the light from the tower hits the ground at and angle greater than $45^\circ$ at points inside the $1000$ mile diameter region.

There are even more complications like atmospheric absorption, shadows from the tower itself, and probably other things I've not though of.

Yep, there is one:

The horizon is curved, so your area that receives light is limited.

For Earth, that is a minimal height of $51.35km$ in order to be able to cover that area.

This yields the minimum required height of the tower to cover that area. "suitable for humans and animals" is very vague, and makes it impossible to get a more accurate result. 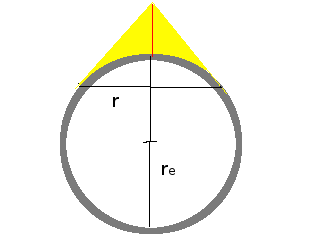 Not the answer you're looking for? Browse other questions tagged physics mathematics or ask your own question.

18
Is a moon inside a hollow Earth possible?
59
What would it feel like on the surface of a planet while it collides with another planet?
8
How could the air be stopped from falling off of a flat world?
45
How many people would have to be killed to make the streets 'run red with blood'?
2
What would be the mathematical formula to figure out a person's weight on a world bigger or smaller than Earth?
17
Is a coral-based planet possible?
19
What kind of mathematical disciplines would be most useful for physics?
34
Would you notice, visually, if the planet you were on was vastly larger than Earth?
2
Entropy, enthalpy, and energy through rapid mitosis