What kind of world changes are necessary to make giant spiders feasible?

Far to the north, in a slushy and storm-torn wasteland, a city stands. Massive pillars jut hundreds of feet into the sky from their anchors deep beneath the rising and falling tides below the city. Spanning these pillars is a vast, multi-layered network of webs. Buildings of spider silk hang from these webs, swaying gently (or perhaps violently) in the wind, and on any given day massive trained spiders crawl the webs, repairing broken cords and making new buildings.

What kind of changes are necessary to make spiders large enough to maintain this city? Apparently the role of oxygen in making massive creatures is more complicated than I thought, and it's not enough to just say "it's a high-oxygen world."

I'm looking primarily for world changes that make giant spiders feasible, such as atmospheric conditions or ecosystem requirements. A good answer would either describe the kind of world these creatures could have evolved naturally in (and maybe some possible ideas for what these changes might mean for other creatures? maybe that's another question entirely) or explain what kind of genetic alterations might make this happen. Possibly a mix of the two - maybe this world has some atmospheric differences that make it very easy to genetically modify existing creatures to fit this description.

I am sorry, but your "spider" will have to be "an extremely spider-like" creature, rather than a super-large-economy-size arachnid.

This is not an impossibility! Many times in Earth's past, vastly different creatures have evolved to so greatly resemble one another that most people would be hard-pressed to tell them apart, in the wild.

To give just one example in passing, there is the late-Cretaceous-era aquatic reptile called the "Dolichorhynchops." "Dolly," among friends! The dolly was the same size as the generic ocean-going mammal we call the dolphin.

Visually, dolly and dolphin were virtually identical, with the exception that the dolphin shares with all mammals a spine that flexes up and down, whereas the dolly has the reptilian backbone which flexes side-to-side.

This means the dolphin has horizontal tail-fins or flukes, which it pumps up and down for propulsion. The dolly swims like a fish, with vertical tail-fins, which it flexes from side to side to move it through the water.

The dolly had a slightly longer muzzle than most dolphins, with slightly more prominent teeth. It also lacked dolphin-kinds' echo-location, and skull-top blow-hole. However, both gave birth to live "pups," whose first instinct was to swim to the surface, to breathe.

Similar ecological niches had led to both a reptile and a mammal to evolve into quite-similar forms, so your alien-world "spider-analogue" creatures could externally resemble Earthly arachnids while being vastly different, internally.

Back when there were scorpions three and four feet long---near-relations to spiders---the atmosphere had been on the order of 2.5 times as dense and oxygen-rich. This allowed the extremely primitive "bug book-lungs" to be able to extract enough oxygen for the creatures to get about. With them, the act of breathing was almost wholly passive; with body-motion flexing the internal tissues sufficiently to cause a sort of "respiration." While they do have internally-anchored muscles, there is no suggestion of an "endo-skeletal" or inside-skeleton animal's diaphragm, nor lungs. In addition, there is nothing like blood-hemoglobin, to hold on to oxygen as blood is circulated throughout the body. Nor is there an organ analogous to a four-chambered heart--- and four chambers (OR multiple smaller and more-simple hearts!) are absolutely necessary to permit the creature to engage in "walking-speed" locomotion, as well as high-speed mobility like chasing quarry.

The "spider-like exo-skeletal animal" will have to have evolved to have lungs and a lung-driving diaphragm to breathe. Plus it would need a reasonably efficient heart or hearts.

It would probably also needs to be a carnivore, too, as a huge multi-limbed body with silk-making glands and silk-spinnerettes to expel the "cables" of silk requires a very-high-energy food-supply only meat provides.

May I suggest "evolving for them" a food-animal . . . maybe a very-large insect like a non-jumping "cricket" that forages for shallow-water seaweed in tide-pools? A bug whose food-foraging won't compete with human crops! (Feeding them coastal bugs gives a "reason" for evolving supremely-strong silk---they must wrap, tie, and anchor captured food-bugs so the bodies aren't caught by waves and tides, and swept out to sea.) Having them partly aquatic also keeps "the food" from wandering into cities.

They'd also benefit greatly from some degree of intelligence--- a very big carnivore-predator of this nature would be awfully dangerous with which to safely work.

I'm not trying to tell what to write! These are just tentative suggestions in the "what if?" vein--- potential "explanations" for robust spider-like beasts that can live on an Earth-like planet (Or be transplanted to Earth) w/o life-support. Please take these, spread your wings, and fly high with your book!

Is this what you are looking for? 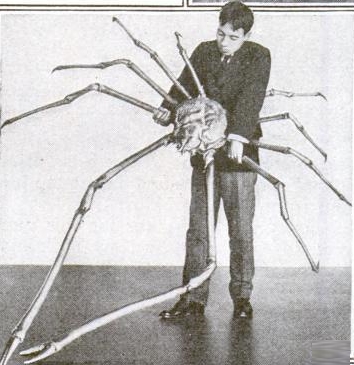 It is a Japanese spider crab with a maximum leg-span of 12-feet it shows that arthropods can and do scale into the size you require. The caveat is that they are aquatic. If you leave them under water all you have to do is teach them to spin.

How to land a crab

1) We need to get oxygen to the extremities. So we add spiracles along the legs your spiders breathe through little holes where ever they need them. These come in handy later.

2) Supporting the weight. The first thing may be to reduce the size of the body. Not into daddy long leg territory because they would not be impressive but maybe half of what is shown in the picture. Beef up the legs a bit as well but remember there are diminishing returns. If you want a web crawling giant you have to keep it light.

Also, as these things are created, you can design very robust pneumatics for leg movement. Of course they would huff and chuff about or maybe whisper and wheeze. This would reduce weight significantly.

The scaling concerns for my colleagues are well founded but might not make un-workable your actually quite modest scale of 4-6 feet. Spider Crabs weigh up to 42 pounds (19 kg). If your pneumatic spiders weighed half that I think they would be do-able.

If the purpose is to have a city built by spiders rather than have giant spiders, as was clarified in a comment then I have the following proposal.

The largest spider on earth is the giant huntsman, so I think that is a good starting point in regards to size. You could make them a bit larger if that helps the flavour. The huntsman is about 30 cm.

A spider of that size could not by it self build a city that is habitable for humans, but if there was a whole lot of them it might be possible. The spiders first makes single threads of spider web. These threads are then spun into thicker threads. That process can be repeated as many times as needed, into "spider rope". Since spider web is potentially five to six times as strong as steel this could be a decent building material.

Many threads of spider rope could also be woven into sheets of "spider fabric." That way you could use the fabric to make a surface more conductive to walking and having as a outer layer around the building.

To make the city a bit believable you need to explain:

The first one could be that the area is flooded by a corrosive liquid every now and then. The only material that is able to withstand that corrosive liquid over any amount of time is the pillars.

The pillars could be leftovers from a alien race, or just trees of a variety that has long since been extinct and only the giant bare trunks are left to in memory of their passing.

I may be mistaken but one similarity I seem to see is that the giant spider crab and an experiment I have read about with plants is that they would both be subject to increased rates of atmospheric pressure. I have read that by doubling the atmospheric pressure to a growing chamber scientists could grow tomatoes 7 times the size traditionally yielded(the size of pumpkins). The depths of the ocean double atmospheric pressure every 17' if I recall correctly so quite possibly I would presume you could simply say the planet were more dense, larger, or simply had a thicker atmosphere/ ozone layer pressing down on it.

Not the answer you're looking for? Browse other questions tagged fauna spiders or ask your own question.

36
Dietary Requirements of Giant Spiders
17
Consistency of Giant Spider Webs
7
What Is The Minimum Size Of A Planet To Harbor Human Life?
6
Biological and ecological considerations for a giant worm
3
What is the biology of a spiderling?

17
What qualities are necessary for an effective herd creature?
41
Would armour made of spider silk work?
5
Living on a Giant Tree - Animals
5
What kind of Apocalypse might make a planet unrecognizable within a few centuries?
10
What kind of animals are my trolls?
6
What is the minimum viable ecological pyramid a terrafoming project would introduce to world with no life to make it suitable for humans?