Moon occasionally appears much larger in the sky

Is there a way for a moon to usually appear relatively similar to our own moon, but occasionally appear much larger from the planet's surface without causing natural disasters due to extreme gravitational forces? To be clear, the moon should only appear this way for a short time before receding back to its previous appearance.

The only way this appearance seems possible to me is through a highly elliptical orbit. But that has the pesky problem of destructive tides.

Since you are only asking for the 'appearance' of the moon getting closer to the planet, I would say that some periodic phenomenon causes an atmospheric distortion that 'magnifies' the moon's appearance, making it much larger in the night sky. It could be tied to some seasonal events caused by some landscape features,

Most likely this would be limited so a smaller geographic area since it would take special conditions to get a good atmospheric affect. I observed something similar one summer evening where I could see details on the moons surface I'd never been able to see before. It was like looking at it through a telescope or maybe binoculars. I've only seen that once, but it was very impressive.

I had been told it was called the harvest moon, but looking that up brings up something else entirely.

Let it have an eccentric orbit anyway

An object travels much faster at periapsis (closest approach), so it is only going to spend a brief period of time there.

You can avoid the tidal stress by making the moon hollow, or very low density, so that even though it appears large, it has virtually no mass. 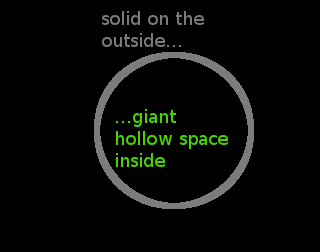 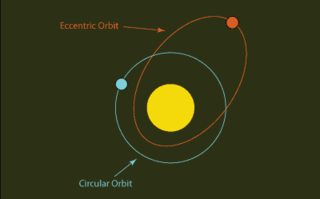 If you allow for a fake moon, you can also make it out of reflective aluminium foil, which would have a very low mass. A sail moon can also use the radiation pressure to hoover, and occasionally come closer to the surface.

A full or near-full moon close to the horizon already tends to look huge, largely because it's easier to compare it to things nearby. With a different atmospheric composition, one might also imagine a lensing/refraction explanation that just like the appearance of the sun changes when close to the horizon (it appears larger and many of the colors are filtered out, though you still should NOT look directly at it with human eyes), there's something about the long path of moonlight through the atmosphere that causes a refractive effect leading to a slight increase in apparent size (like a pencil in a glass of water).

Waiting several hours for the moon to climb up in the sky causes "receding back to its previous appearance."

On Earth, a lesser version of this happens "occasionally" on a roughly monthly cycle when not obscured by weather, interacting with an elliptical orbit.

The size of the "moon" in your image is huge, absolutely massive. I don't see any way to achieve that with a moon. However if you flip the perspective and instead have the "planet" that people are standing on in fact be a moon around a much bigger planet, for example a gas giant, then it's entirely possible and you could have the planet appear as large or as small as you like.

To have the size changing you still need to place the moon that people are standing on in an elliptical orbit. Gravitational effects would cause some fairly large tides but you can reduce that by having smaller oceans. Also the simple fact of having the planet be larger would mean the tidal difference is smaller as the difference in gravitational effect is smaller from one side of the moon to the other. I honestly don't know how much difference this will make and don't have time to do the math at the moment but it would be worth investigating.

(To explain: The sun is pulling on us far more strongly than the moon is, but solar tides are weaker simply because the difference in pull between the near and far side of the earth is smaller. You could get the same effect from the gas giant).

This was a popular thing to discuss in the ancient world and medieval. Al-Hazen (who lived during the Fatimid Califate of Cairo around 1100 AD made significant contributions to the principles of optics, astronomy, mathematics, meteorology, visual perception and the scientific method. ) I believe he was one of the earliest discuss the moons apparent size differential as being an optical illusion.

He observed that the moon's angular size remained constant. (So, the atmosphere does not somehow create the illusion.) He then proposed that the sky looks like the flat ceiling of an enormous room, and the rising moon appears to move along it in a more or less flat trajectory, so the moon would look closer at the zenith thus it would look a smaller linear size than it did at the horizon.

While not exactly true he paved the way and wasn't far off from the real cause.

A crater on the moon carries his name because of his work.

The moon does have a slightly elliptical orbit, which does cause it to appear bigger at some times than at others; it looks noticeably bigger in the sky when it is at the perigree of its orbit compared with when it's at the apogee. The real-world difference in apparent size between the two is around 15% so it's not insignificant.

Now, if you want the moon to look even bigger at times, you'll need to increase the elliptical length of the orbit. This will magnify all these effects, to the point that that you would every easily end up with severe flooding problems on a fairly regular basis.

You can get rid of the problem of spring tides by putting the moon on an orbit that doesn't cause alignments. To do this, you'd need the moon to have an out-of-plane orbit. That would have a whole slew of interesting side-effects on the earth-moon system, depending on exactly how you set up the orbit, but would allow you to have a more elliptical orbit without having catastrophic floods every three months. You'd still get might higher tides at perigee, but the extra-high spring tides would be gone.

In addition, giving the orbit some eccentricity would allow you to have a closer perigee at one end of the orbit, and thus a more infrequent but more dramatic effect when the moon is closest. Again, however, this would have a marked effect on tides in addition to the perceived size.

All of the above, however, is at odds with current theories of how the moon formed. If you want orbits like those described above, the moon would probably need to have instead been a wandering object captured into orbit. We don't know of any wandering objects anything like the size of the moon, but it's not impossible. What this does allow though is for the moon to be a different density to reality. If you have a moon that is much less dense, then it can have a lot larger diameter without making any difference to the tidal effect. With an eccentric or elliptical orbit, this would allow you to have a much wider range of visual size. The down side is that at apogee, you'd probably need to set it up with hardly any tides at all. (tides are considered fairly key to some life processes, so this in itself could be as problematic as flooding from too much tide).

In any case, I still don't think you'd be able to get the moon looking anything like as big as shown in the picture in the question. For an earth-moon system to have a view like that, you'd be virtually ready for a collision, and yes, the tides would be completely insane.

Looking at the picture you posted, I don't think you've got any realistic chance of a view like that with an earth-moon-like system. As you say, the tides are too much of an issue. I've posted a separate answer giving you my best shot, but I don't think it's going to work as well as you want.

So let's take a completely different tack. How do we achieve an image like the one you posted?

Let's paint a scenario where your protagonists think they are on a planet like earth, but are actually in a massive dome structure. If you've seen "The Truman Show", you'll get what I'm trying to visualise here. The illusion is big enough and real enough that everyone is convinced and carries on their normal lives.

In this scenario, the "moon" they see doesn't really exist; it's actually just an image projected onto the ceiling of the dome to appear like the moon. (a real moon may or may not exist outside of the dome, but that's not relevant here)

The "super-moon" effect occurs when the projector develops a fault. One day the moon appears on the the horizon and is massively bigger than usual. No natural disasters or flooding, as it's just a projection, but obviously the people are freaked out. Cue the guy in your picture...

Not the answer you're looking for? Browse other questions tagged planets earth-like moons orbital-mechanics or ask your own question.

11
A world with a moon orbiting much closer than ours

4
When the Moon comes crashing down (wait, it doesn't)
10
What are the requirements for an atmosphere retaining moon with a stable orbit around an Earth-like planet with non-destructive tidal forces?
24
Equatorial icecaps and polar jungles a fantasy or reality?
8
How do the tides work when the sun powers the moon to keep out evil?
3
How do I explain the formation of my world scientifically?
8
Rock formations & islands on a moon with megamareal tides
7
Temperature and climate “under” the gas giant in a tidally locked moon
9
How can an Earth-like moon meet these angular diameter conditions?