Why would a civilization with the ability to create androids use giant, 2x Man-sized gears anywhere? [closed]

Why would a civilization with the ability to create Ridiculously Human Military Androids use giant gears twice the size of a man?

The Androids are human-sized with electronic brains that can do everything a human brain can do (the point of that statement being emotions).

They can also wirelessly connect to an info-server.

They are outfitted with nanites that can transform their hands into weaponry, and also be Uterine Replicators.

Their eyes can serve as Everything Sensors, or at least for everything medical, with human biology, within 1 minute of observation and analysis combined.

No matter how advanced your technology is, your need for and the efficiency of Simple Machines (Wiki) will always be there. Specifically for gears is the ability to sacrifice speed for torque and vise versa (or they can be used in a direct ratio) and in all meshed-gear configurations there is nearly a 100% efficiency in the transfer of energy if we ignore friction.

Two toothed wheels fit together either directly or through a chain or belt so one wheel will turn the other. Some gears may have a screw or a toothed shaft in place of one of the wheels. A gear may also be a combination of toothed wheels that produces a certain speed (such as a bicycle's top gear which makes the bike go fast, and the low gear for slow speed.) Examples: Clock, Automobile, Drill

I laugh at your x2: (I've no idea what this one was for but huge skycranes need a sleuth gear* that's about that size, as do the spillways on dams, seaway locks, etc.) 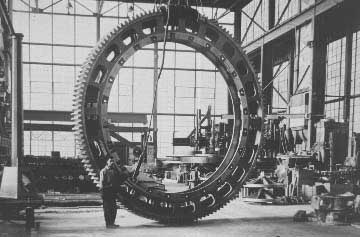 .* A sleuth gear is what lets the crane spin in circles (it lays horizontal just underneath the cab). It's like a guide rail and a control surface.

In a facility such as a foundry, the crucible is usually tipped with a hoist but in fully automated factories it's not uncommon to find it suspended in a gear mount. There're just not all that big usually. Metallurgy is a sector that benefits heavily from economy of scale, so I'd have no problem with you up-scaling anything you'd find in a foundry.

If we lived in The Matrix's city of Zion, we'd need some for the dock bay door's counterweights.

Until your society has unlimited electrical power and food replicators, none of your technologies will change, if ever, the basic logistical problems of feeding, clothing, supplying / diverting / removing water, sheltering the population, providing goods of mass production and the tools with which to do so. Or those found in the finished products intrinsically, i.e., a drawbridge: 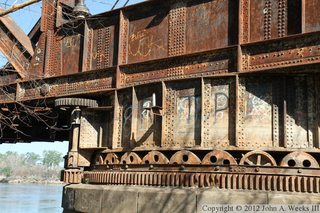 Now, if you can also control the weather then a lot of these needs disappear, as most of them are required to combat the logistics of delivering goods and providing services. If we're provided all these things and the nanites themselves need nothing (highly implausible) then OK, go gear-less.

Not the answer you're looking for? Browse other questions tagged technology hard-science android .

6
How would the widespread creation and use of androids affect weaponry?
18
In a world with escape velocity greater than the speed of light, would a civilization be able to reach space?
15
Why would civilizations with advanced technology still use castles?
36
Why would the Federation ban escape pods that come with manual override?
3
Why would a technologically advance space-faring civilization still use physical currency?