Okay, I was one of the lucky ones. I was in a windowless concrete building when the bomb went off, and I was far enough away to survive the shock wave and super-heated winds.

Even luckier, I am a fan of antique cars, and my 67 mustang hardtop was parked one floor down in the (also concrete enclosed) garage. Its' pre-computer-age ignition fired up on the first turn of the key and I'm now racing through empty streets, away from the detonation site within 3 minutes of the blast.

Assuming that building, vehicle choices, and clear roads have exhausted my positive karma supply, I glance in the rear view and confirm that yes, a mushroom cloud is rising into the sky behind me, and that the post-blast winds are returning to their natural course, gust-fully chasing me as I flee out of town.

Given a three minute head start, can the fallout of a 150 kiloton ground-level nuclear blast, terminally irradiate a person during the time it takes for a high speed muscle car to escape the initially contaminated radius? Assume that the person starts in the closest survivable concrete building and that the roads have been recently swept clean (but contaminated) by super heated nuclear winds.

Would the car's tires melt and burst during the first few miles of the escape?

Are there any other issues that I am overlooking, like "the car will overheat" or "the driver will be cooked long before the radiation kills him"?

Should the driver avoid future procreation activities in the years following his lucky survival?

The site Nukemap allows you to calculate and visualize what is going to happen (http://www.nuclearsecrecy.com/nukemap/)

So if you are 3 miles away (4.8 km)from ground zero, you are outside of the fireball, but still near the edge of the blast and immediate thermal pulse. I suspect that most of the buildings around you will be collapsed and on fire, and this is before the vaporized and irradiated soil comes back to earth as fallout. Assuming your contractor built your structure to withstand 20psi overpressure (and the building is sealed against overpressure as well, inrushing pressurized air will probably pop your lungs once the pressure increase is more than 6psi), you are now in an island of relative safety.

The time for the fallout to begin descending is going to be dependent on a lot of factors, and the fallout plume will also be determined by the direction of the winds on the day. You may be very lucky with the wind blowing directly away from your shelter, or you could have the fallout plume directly in line with the highway you intend to travel down.

Personally, I would break open the canned tuna, ensure the filtration system is fully functional and wait. Your car escape will involve driving through a firestorm, and the chances of driving over sharp pieces of rubble that can puncture a tire are close to 100%. Even the idea that the roads will be clear of larger pieces of debris is pretty iffy; the 20psi blast wave will be picking up and flinging pretty large objects (in an urban setting you can imagine city buses, delivery trucks and large chunks of concrete and metal structures raining down from the blast). Asphalt roads might even have melted or caught fire as well, which should make for an interesting drive.

While you are waiting, make sure you disconnect the car battery, and it is probably a good idea to jack up the car and place it on blocks to unload the suspension and keep the tires from contacting the ground. Drain the gasoline from the tank (it will eventually turn into varnish) and perhaps change the oil and filters. Depending on the wind, you might be waiting for a while before the fallout clears your area.

And if you want to drive away afterwards, trailer your Mustang and tow it with this: 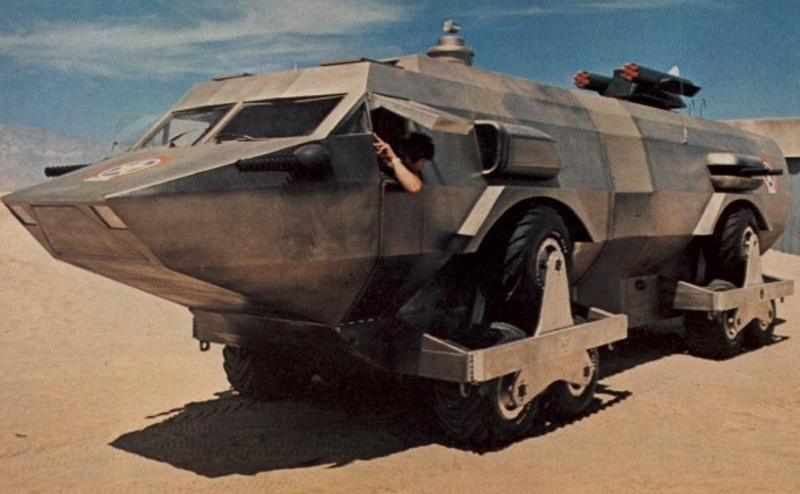 It all depends on your starting distance and kind of the bomb. Because modern bombs are classified technology, I'll only sketch it.

Visible and infrared light mostly. Travels at the speed of light. There is a lot of it, but it lasts only a short time. If you are far enough your building survived, there probably are some fires around, but not a lot. Asphalt should not be hot enough to melt tires. If your building was really, really sturdy and close, there is a firestorm you don't want to see or drive thorough.

Still there, you can breathe, engine can run. Better have good filters, of course, because dust isn't good for lungs or engines, but you'd rather survive. Unless you are close enough to be in firestorm, of course.

Not a real concern as it travels at or near speed of light. If you weren't exposed to a flash, you weren't exposed to this, either. Not if your concrete building was thick. See for example this, this or this - concrete can be effective radiation shield, if really thick or poured with proper additions. It's not normally used because lead is better insulation per millimeter of thickness, but actually concrete seems to be better radiation shield per dollar spent and have far superior structural qualities. That's why concrete shields Chernobyl.

Some substances are turned radioactive by radiation from the bomb. You don't want to touch, breathe, eat or drink anything. How serious it is? Depends on the bomb, more modern design means less of this effect, as no one really wants to permanently waste terrain.

That's what you think you are running from. After initial spread caused by the blast, it moves with the wind. Modern bombs are meant to be as "clean" as possible, creating little to no fallout. Even with older ones, like these from Nagasaki and Hiroshima, you probably could drive far enough to survive. Just don't expect it to have no effects at all. If it's set in future, it's not a big stretch to hope this effect will be negligible.

Not the answer you're looking for? Browse other questions tagged reality-check nuclear or ask your own question.

39
Would EMP From a Nuke Stall a car?

8
How feasible is a nuclear powered air liner?
4
Mountains and Nuclear Bombs
3
Nuclear explosion from nuclear waste?
48
Are nuclear weapons useful in space?